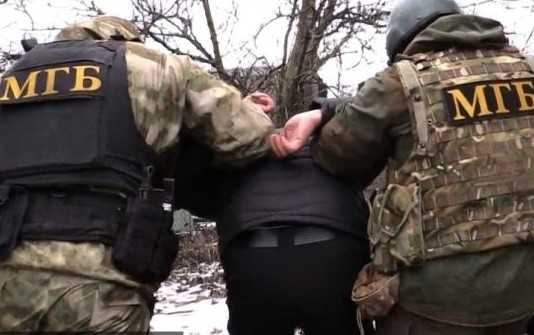 Roman Manekin has disappeared soon after criticizing the Kremlin-backed leader of the self-proclaimed ‘Donetsk people’s republic’ [‘DPR’] and initiating a petition against fake elections scheduled for 11 November.  If, as reported, he has been ‘arrested’, it will not be the first time that this fanatical supporter of ‘Russian World’ ideas has collided with reality in DPR and ended up tortured and imprisoned.

Manekin’s disappearance was first reported by ‘comrades’ on social media.  On 4 November, a former ‘DPR official’ reported that both Manekin and Alexander Smekalin had been arrested on political grounds.  Smekalin, a ‘DPR deputy’, had been detained for planning a political rally, but had, reportedly, been released.

Manekin has not been seen since 1 November.  His disappearance comes after two months of unconcealed opposition to Denis Pushilin, the militant leader who, with Kremlin support, swiftly took control after Alexander Zakharchenko was killed in a bomb blast on 31 August.

He also created a Change petition entitled: ‘Cancel the anti-constitutional elections in DPR!’ which has gained almost 1500 signatures.  The petition asserts that on 7 September there was a coup in ‘DPR’ with the so-called elections on 11 November aimed at providing legitimization to the results of that coup.

There is only one real candidate, the petition continues, namely Pushilin, with the other individuals merely technical candidates.

Manekin would certainly not have endeared himself to Pushilin with this text.  Not only does he say that the latter is very unpopular in ‘DPR’, but attributes this first to Pushilin’s unsavoury role in the ‘MMM’ financial scandal before 2014, and then to his participation in “the fruitless Minsk negotiations”.

Manekin, a 53-year-old Russian, is ideologically close to Andriy Purgin, one of the Ukrainians, mostly with far-right and very pro-Russian views, who took part in the creation of a so-called ‘Donetsk republic’ organization in 2005, and in training and indoctrination camps in Russia.

After the Russian-backed and led creation of ‘DPR’ in 2014, Purgin was, for a time, a ‘first deputy prime minister’.

Manekin blames Pushilin for what he calls the intrigue in September 2015 that led to Purgin losing his post, and accuses Pushilin since then of being “the direct initiator of repression against citizens of DPR who do not agree with his statements”, and much more.

He writes that people are frightened, and that in such conditions, there can be no sense in holding elections, adding that these will not be recognized, either within ‘DPR’, nor internationally.

This is, indeed, one of the multiple reasons why the so-called ‘elections’, which are not being run in accordance with Ukrainian legislation and are anything but free and fair, have been condemned by Ukraine’s government, the EU and all democratic countries.

It is, however, unusual to see them clearly stated by a person who swallowed all of the propaganda in 2014.

It is much less surprising that he should have been detained.  As reported, he disappeared in October 2017 and there were even rumours then that he had been murdered.  What proved to be his torture and detention came after he criticized at least one ‘DPR’ leader, and also rejected the official narrative about the violent death of Russian mercenary and murderer Arsen Pavlov [‘Motorola’].

Manekin was born in Donbas, but is a Russian citizen who, according to Donetsk (exiled) journalist Denis Kazansky, played an active role in setting up DPR’.  Back in October 2017, Kazansky noted that, although Manekin had spent most of his time in Donetsk since 2014 and “dreamed of reinstating Stalin’s times”, he appeared to still believe that he could write and say what he wanted and that he himself would be untouched by the repression.

What is perhaps stranger is that Manekin later emerged, even spoke of having been tortured, and yet stayed in ‘DPR’ and continued to believe that he could write and say what he wanted.

This new arrest proves him wrong and, if anybody was in any doubt, how far removed from ‘elections’ the farce up to and on 11 November really are.