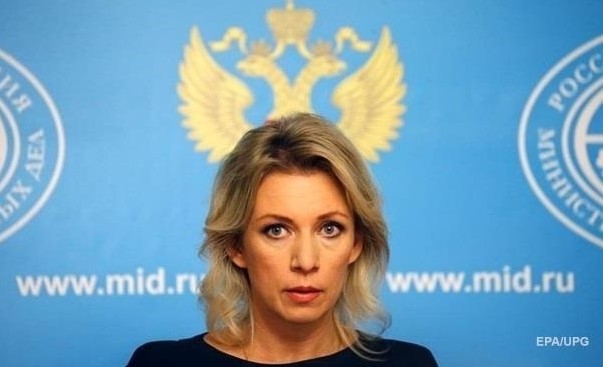 Russia’s Foreign Ministry has launched an interesting counter-attack to France and Germany’s accusations regarding the downing of an OSCE drone over occupied Donbas.  Spokesperson Maria Zakharova has claimed that the route of the drone should have been agreed in advance with the so-called ‘Donetsk and Luhansk people’s republics’ [DPR, LPR].    That would certainly have saved the drone, or UAV, but only because Russia would have had prior warning to ensure that it did not get caught bringing a military convoy, together with a surface-to-air missile system into Ukraine.  It was immediately after the UAV spotted the Russian military weapon system on 27 October that attempts were first made to jam the UAV, and then it was brought down.  This was not the first occasion that UAVs had been jammed, with an earlier incident on 10 October also following the sighting of a Russian Ural truck mount mounting with an anti-aircraft gun near the border.

The Joint Statement from France and Germany was undiplomatically blunt in its message.  It not only condemned the downing of the UAV, but stated that:

“Evidence collected by SMM suggests Russia and the separatists it backs bear responsibility for the targeting and downing of the LR UAV, blinding the mission at this particular spot.

In recent weeks, the SMM’s UAV, while being heavily jammed, observed on multiple occasions convoys entering Ukrainian territory across a non-official border crossing point from Russia into Ukraine. Before the loss of communication, the SMM UAV spotted a surface-to-air missile system.”
The Russian Foreign Ministry spokesperson called on France and Germany to refrain from what she called “unsubstantiated allegations in anti-Russian mode” until the end of the investigation, and claimed that the DPR/LPR militants had already expressed willingness to cooperate in an ‘investigation’.

Most of Zakharova’s pronouncements were similar to those made about the Joint Investigation Team’s identification of the Russian BUK missile from the 53rd Brigade used to down MH17 and other Russian war crimes.  The aim is always to imply that nobody can know, that there are multiple possible versions, and that it’s all so unfair to Russia.

Bandying about terms like “unsubstantiated allegations”, she then went on to make some seriously questionable claims to back the astounding assertion that the OSCE SMM should coordinate the drone’s movements with the Kremlin-backed ‘republics’.

According to Zakharova, the militants’ demand to know the route that the UAV would take and for it to be fitted with flashing lights is because the Ukrainian “more and more often use armed drones as military aviation against civilian targets in Donbas”.

She did not provide proof of this, instead using another favoured method, namely, the claim that only cases that can result in ‘anti-American’ material get reported, and that there had been many losses of drones in government-controlled areas.  The assertion clashes with the response from outgoing Deputy Head of the SMM, Alexander Hug.  He said that the drone downed on 27 October had been a first.

Without providing at least one example to back her claim, it is difficult not to conclude that Zakharova was groping about for some excuse to justify what is essentially an inexcusable demand.  Any prior warning of a UAV’s movements makes them effectively a waste of time.

In the above-mentioned interview, Hug spoke of problems with monitors visiting areas near the Ukrainian – RF border, not under Ukrainian government control.  The number of checkpoints mean that the militants always have plenty of time to conceal what they don’t want seen.  The UAV gives the possibility of carrying out real, close to spot checks, including at night.

It is Russia which, by carrying out night-time operations with military trucks, and vehicles, some carrying military hardware, is demonstrating that it has something to hide.

More details about all the incriminating evidence for the Courts at the Hague which the OSCE SMM’s drone has uncovered here:  OSCE drone downed after it spotted Russian military movement by night in Ukraine