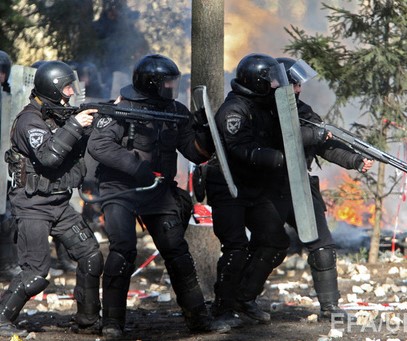 Five years after the Euromaidan protests began in Ukraine, ten men suspected of crimes against Maidan activists hold managerial posts in the enforcement bodies, while a further 23 are low-ranking officers.  The number of convictions remains fairly small (52), with only nine people sentenced to periods of imprisonment.  This is despite the fact that 104 people were killed during the last month of the protests, including 48 gunned down on Instytutska St on 20 February 2014.

Information about the course of the investigation was provided at a briefing on 21 November by Serhiy Horbatyuk, Head of the Special Investigations Department.  The scale of their work is certainly great, with checks carried out on 15 thousand people to determine whether they were involved in crimes.  Horbatyuk says that most of the 4,700 crimes have been solved to the extent that they have ascertained the circumstances, the organizers and those who carried them out.  442 individuals have been informed they are under suspicion, with 279 indictments passed to the court.  13 men are currently in custody, with four of these former Berkut officers on trial accused of killing 39 activists

The relatively small number of convictions, however, makes it clear that establishing the circumstances is only a first step.  Against nine people imprisoned for crimes against Maidan activists, nine others were acquitted.  Horbatyuk stresses, however, that in many of the latter cases, there are appeals or cassation appeals underway which could change the situation.

91 killers are under investigation (79 activists and 13 members of the enforcement bodies).

Horbatyuk and his team have earned the trust of lawyers representing Maidan victims and the families of Nebesna Sotnya [‘the Heavenly Hundred’ – those killed).  Horbatyuk’s Department is structurally within the Prosecutor General’s Office, but independent, and has frequently antagonized the management of all law enforcement agencies through its blunt criticism of obstruction shown.  Horbatyuk himself has publicly spoken of systematic obstruction of the investigation from Prosecutor General Yuri Lutsenko; the Interior Ministry and courts, as well as from Interpol.  He and lawyers representing victims or their families have also criticized the high-profile trial in absentia of ex-President Viktor Yanukovych who is in hiding in Russia.  This is in no way because they do not see grounds for Yanukovych’s prosecution, but because they do not want the case later dropped, including at European Court of Human Rights level, because of inadequacies in proceedings.

An element of conflict was seen even during the press briefing after Horbatyuk spoke of one current SBU officer suspected of using a weapon and causing bodily injuries.  Horbatyuk complained that they had been trying to track him down for the past five months, and kept being told that he was on a business trip and that nobody knew how to get in contact with him.  This was denied by Deputy Prosecutor General Angela Stryzhevska who said that the man is currently in the conflict zone in Donbas, but that there are mechanisms for questioning him.

In that particular case, it is unclear why there is such a discrepancy.  In very many criminal investigations over the last five years, however, it has been difficult not to feel that the investigation is being sabotaged by law enforcement bodies and by some judges.

There have been repeated moves aimed at taking parts of the investigation away from the Department of Special Investigations, or even to dissolve the latter altogether.

In June 2018, lawyers representing the families of slain Euromaidan activists warnedv that current and future investigations into crimes against Maidan activists were being jeopardized by Lutsenko’s plans to dissolve the Department (as a supposed ‘reorganization’).

The Advocacy Advisory Panel pulled no punches, calling Lutsenko’s plans “a step to both winding down investigations into Maidan crimes, and abandoning those prosecutions that have already been passed to the court”.

It was due to pressure from the victims, lawyers and civic society that the Department for Special Investigations was finally created in January 2015, with this marking the beginning of any real progress on investigating the crimes.  Before it was formed, the cases had simply gathered dust in various divisions of the Prosecutor’s Office and Interior Ministry.

On October 24, 2016 Lutsenko suddenly announced the first ‘reorganization’ of the Department.  Horbatyuk remained in charge, but lost a considerable number of investigators and prosecutors who were redeployed in a newly created department on investigating organized crime.  The Advocacy Advisory Panel noted that assurances that this department would also be involved in investigating Maidan crimes had come to nothing. Instead new prosecutions were not passed to the court; people were not informed that they were under suspicion; and those cases that had already reached the courts remained where they were, without any progress being made.  This, they said, was an example of how Maidan cases get investigated in other departments – they don’t.

That this in no way enhanced progress was demonstrated by the investigation into the killing of 73-year-old Ludmila Sheremet and 21-year-old Dmytro Pahor on 19 February 2014, in Khmelnytsky.  It is likely that Ludmila Sheremet was killed by somebody in the SBU which makes the fact that the military prosecutor ‘lost’ the most crucial evidence – the bullet fired – of major concern. (see Prosecutor ‘loses’ critical evidence regarding Khmelnytsky Maidan killings).

Ukraine marks 21 November as Day of Dignity and Freedom, and remembrance ceremonies were held in honour of those whose lives were lost in what we now remember as Ukraine’s Revolution of Dignity.