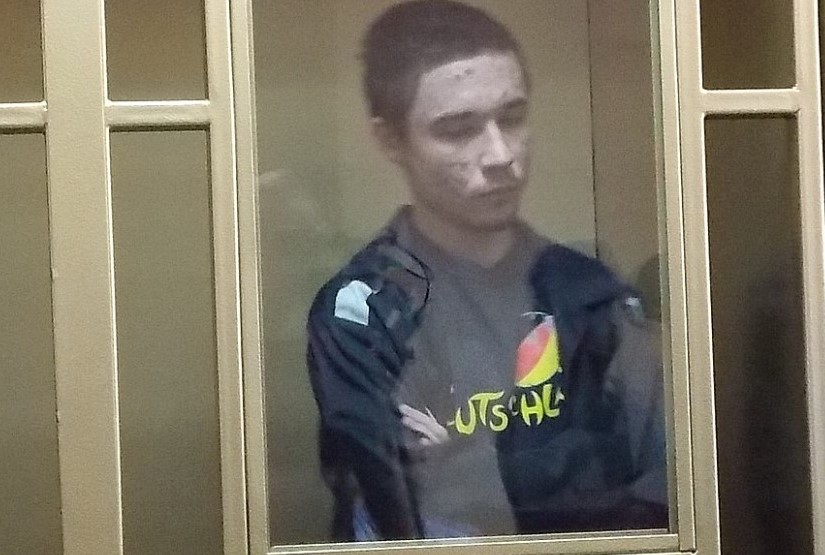 The best friend of the FSB’s chief witness in its ‘trial’ of 20-year-old Ukrainian Pavlo Hryb has testified in the young Ukrainian’s favour and has stated in court that she did not make the incriminating assertions claimed by the prosecution.  This is particularly important given that the prosecution’s case hinges on the testimony of her very young friend who told Ukrainian media after Hryb’s arrest that she had been threatened by the FSB with terrorism charges if she didn’t help them to abduct and prosecute Hryb.

An earlier attempt at a ‘trial’ was aborted after the prosecution was found to have used the wrong version of the criminal code for the charges. The first hearing of the renewed attempt was on 15 November, with the indictment, as read out by prosecutor Alexei Kister, otherwise unchanged. Russia is claiming that 19-year-old Hryb tried to persuade his then 17-year-old Internet girlfriend to plant a homemade explosive device and set this off during a school assembly.

There does not appear to be independent evidence to confirm the authenticity of the correspondence in question.  Suspicions are only exacerbated by the fact that the prosecution has only produced the supposed comments in Russian translation, although the two teenagers, who believed themselves in love, corresponded in Ukrainian. There are strong grounds for wariness, since later correspondence does not mention any such plans and there was certainly no attempt to carry them out.

Yershova herself began giving testimony, behind closed doors, on 15 November.  She was due to continue on 23 November, however was ill and her appearance was therefore postponed. The court instead heard Maria Yuristova, an 18-year-old first-year student who identified herself as Yershova’ best friend.  She stated that Yershova had communicated via the Internet with Hryb since 2016.  Their correspondence, she said, had mainly been of a romantic nature, and she did not recall them having discussed politics.

According to a Caucasian Knot correspondent who was present, the only negative aspect of the young people’s correspondence that Yuristova mentioned was that Yershova had stopped planning to go to university in Russia, and instead wanted to move to Ukraine.

Yuristova’s testimony was clearly not to the liking of prosecutor Kister who read out the protocol of her alleged testimony from 5 October 2017.  This stated that Yuristova had described Yershova as “a Ukrainian nationalist with right-wing views, who was interested in Ukraine and its place in the world, and who glorified [the Ukrainian nationalists] Stepan Bandera and Roman Shukhevych.

Yuristova was supposed to have asserted that Hryb and Yershova had concurred on ‘Ukrainian nationalism’, a common understanding of Ukraine’s history as occupation by the Russian empire and the Soviet Union, as well as on “the juxtaposition of the Ukrainian nation and the Russian world”,

Yuristova had also corresponded with Hryb in ‘VKontakte’ and via Skype, however mainly about the cartoon serial My Little Pony which they both liked.

Yuristova confirmed that her signature was on the protocol, but denied having ever called her friend a Ukrainian nationalist and said that she didn’t know what nationalism is.

Most importantly, she explained in court that she had heard about the alleged ‘bomb’ from Yershova only after the latter learned that a criminal investigation was in question.  She says that Yershova explained the grounds why criminal charges might be brought.  She said that Hryb had mentioned a bomb during his chat with Yershova on Skype and that the latter had seen it as a joke and not taken it seriously.

Hryb’s lawyer Marina Dubrovina is convinced that the ‘investigator’ came up with the ‘testimony’ which Yuristova had then signed, without reading.

Dubrovina also mentioned that Hryb had been preparing himself for the hearing, making notes on what needed to be asked.  These, however, had been removed by the prison staff, which is a flagrant violation of his right to defence.

So too is the fact that during the first hearing on 15 November, the judge ignored Hryb’s opposition to having a state-appointed lawyer foisted on him.  This position was backed, interestingly enough, not only by Dubrovina, but by the appointed lawyer who said she had never even met Hryb before the hearing.

This is not the first time that Russia is using this ploy to enable court hearings to be held without Hryb’s real lawyer being present.

Hryb does not make complaints about the staff of the SIZO [remand prison], which is not surprising since he is held under their total control.  His family have, however, reported that prison staff have ‘lost’ expensive medication which they had gathered for Hryb and which he needs for a life-threatening blood circulation problem.

Ihor Hryb also reports that his son has not been receiving any letters.  It is possible that this is part of the deliberate methods used to put pressure on the young man, and it is important that the letters keep coming (address details, etc. below).

The Skype conversation in question allegedly took place between March 27 and April 13, 2017.  Yevhenia Zakrevska, the Ukrainian lawyer representing Hryb at the European Court of Human Rights, does not know of any record of the Skype conversation, but she has seen all later correspondence between the two adolescents who believed themselves to be in love.  From a month after the alleged mention of a plan to commit an act of terrorism, there was not one word about it.  Not before the date allegedly chosen for the bomb, not on the day, nor afterwards.  Nothing at all to back the FSB’s claim.

The FSB themselves, who claim to have discovered this plan, did not say or do anything.  Yet on July 4, they allegedly launched a criminal investigation, with this involving a search of the young Russian girl’s flat.   By July 28, the FSB had designated Hryb as the ‘accused’ in this story, and they then set about intimidating the young girl (and her mother) into persuading Pavlo to meet her in Belarus.

The meeting was, unfortunately, arranged for August 24, 2017 in Gomel, Belarus, after which Pavlo vanished.  His father understood swiftly that something was wrong and set off in search.  The coach driver confirmed that Pavlo had entered Belarus without any problem.  This is of major importance since Ihor Hryb saw on a tablet screen, while talking to the Belarusian border guards, something suggesting that his son was on a ‘wanted list’.

Had he been on an international wanted list, then he would have been stopped on the Ukrainian-Belarusian border, with the Ukrainian authorities informed.  Instead he passed into Belarus with no difficulty, and was, he later told his lawyer, seized by unidentified individuals who pushed him into a car.

Pavlo Hryb could not have been taken from Belarus into Russia without the Belarusian side being at least aware what was happening.  There is simply no possibility that the young man, who has openly expressed his views about Russian aggression and whose father was working for the Chaplain Service of the Ukrainian Armed Forces, would have voluntarily entered Russia.

It was only on September 13, 2017 that Russia officially admitted that Hryb was in their custody, although it later transpired that a court in Krasnodar had issued an arrest warrant back on August 17.

Russia is now claiming that Pavlo was ‘arrested’ in Russia’s Smolensk on August 25.

It is likely that the delay in revealing his whereabouts was so that the FSB could try to force a ‘confession’ out of the young man to the quite incredible charge of incitement to commit a terrorist act, under Article 205 § 1 of Russia’s criminal code.

As mentioned, Hryb suffers from serious blood circulation issues, including portal hypertension, and has been under specialist medical supervision most of his life.  The poor food in the SIZO and restrictions on what he can buy in the prison shop heighten the danger of an increase in stomach acid which could lead to haemorrhaging in the digestive tract, stomach or duodenum.  All of this is especially dangerous due to blood coagulation.   The young man had been due to have a portosystemic bypass in September of last year, however had been abducted to Russia by that time.

There are no medical facilities in Krasnodar who would be capable of treating Hryb should such haemorrhaging begin, and Russia is risking Hryb’s life by effectively falsifying his medical readings and lying to the European Court of Human Rights about his condition.

It is very important to show him – and Moscow – that he is not forgotten.  Please use the Russian version of his name (Pavel) in any letters and avoid either politics or mention of the ‘case’.  Letters need to be in Russian.  If this is a problem, you could copy the letter below, perhaps adding a picture or photo.