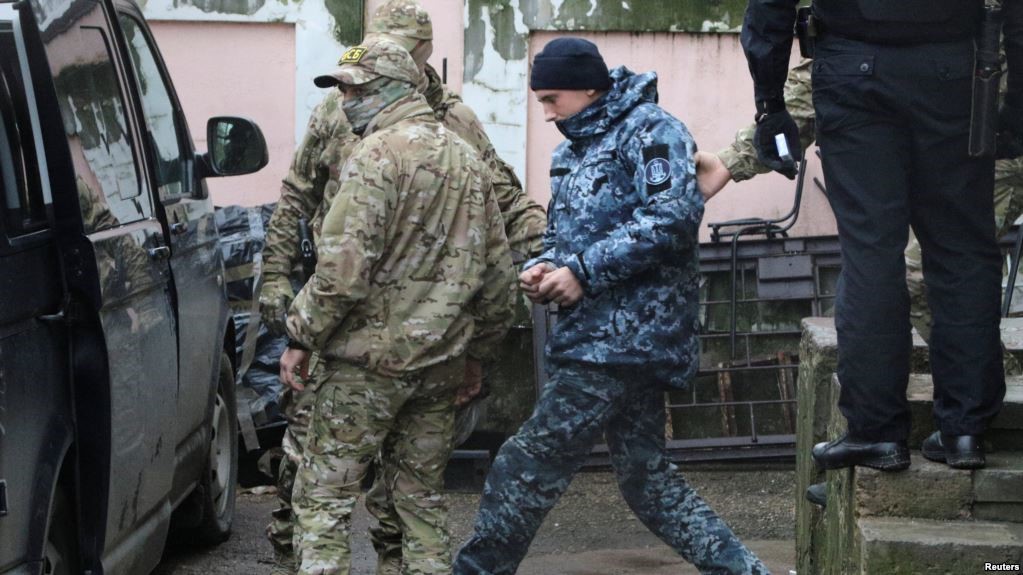 The European Court of Human Rights has reacted swiftly to an application from Ukraine in defence of 24 Ukrainian sailors whom Russia seized after firing on Ukrainian naval boats on November 25.  The information demanded could not be more relevant, as the men have all, reportedly, been taken from the remand prison in occupied Crimea, without any explanation or indication of their destination.

Ivan Lishchyna, Deputy Minister in Ukraine’s Justice Ministry, reported on 29 November that the European Court of Human Rights [ECHR] has demanded information from Russia by Monday, 3 December, regarding the seizure of the 24 men and the legal grounds for holding them prisoner; where they are being held; injuries they sustained (when fired upon by Russian border guards) and the medical treatment provided. Lishchyna has dismissed Ukrainian media reports stating that ECHR has demanded the men’s release as inaccurate.  He explains that the question regarding the legal grounds for the men’s imprisonment is very important as Ukraine has yet to be informed why Russia has seized Ukrainian naval servicemen.  Let them now explain why they are not only holding them prisoner, but have brought criminal charges against them (of "illegally crossing Russia’s state border", this carrying a sentence of up to six years’ imprisonment)

This is extremely important as the men are, in accordance with the Geneva Convention, prisoners of war, and are protected by international law.

The events on 25 November are at one level a continuation of Russia’s military aggression against Ukraine which began in February 2014.  There are, however, some significant differences.  On this occasion, Russia cannot even try to hide behind its use of soldiers without insignia, usually dubbed, far too kindly, ‘little green men’.  Russian FSB border guards deliberately rammed a Ukrainian naval boat and opened fire on three naval vessels, injuring six Ukrainian sailors.  The Kremlin’s attempts to blame ‘Ukrainian provocation’ are absurd since Russia had and is continuing to block access to the Azov Sea in flagrant breach of both international law and a bilateral agreement from 2003.  If Russia has been able to wave supposed criminal charges to try to justify its previous arrests and imprisonment of Ukrainians on political grounds or for their faith, this time its attempt to bring absurd criminal charges is in direct and visible breach of the Geneva Convention on POWs.

It was reported on 29 November that the 24 men, three of whom had only just been discharged from hospital, had been moved from the Simferopol SIZO where the remaining 21 men had been held since being taken prisoner.  While original reports that they were being taken to the FSB’s Lefortovo Prison in Moscow were initially refuted by former political prisoner Akhtem Chiygoz, it was he who later informed that the men were, nonetheless, being taken in an unknown destination.  Nariman Dzhelyal, the Crimean Tatar civic leader who has been at the forefront of the huge efforts to provide aid for the imprisoned POWs, later confirmed that the men were no longer at the SIZO and promised to ensure that help was delivered to them as soon as their whereabouts were ascertained.

The first report that the men had been taken to Lefortovo came from lawyer Dzhemil Temishev who is representing two Crimean Tatar political prisoners – Resul Veliliaev and Ali Bariev – imprisoned in the Lefortovo Prison. He believed that the men were already in Moscow since colleagues from Lefortovo had told him that the prison had been virtually closed, supposedly ‘for technical reasons’, whereas he and others had been prevented from visiting their clients at the Simferopol SIZO.

The Ukrainian POWs are represented by nine lawyers, most of whom have considerable experience in defending Russia’s mounting number of Crimean Tatar and other Ukrainian political prisoners.  One of them is Nikolai Polozov, the lawyer who defended Crimean Tatar Mejlis leaders Chiygoz and (until illegally removed from the case) Ilmi Umerov and who is currently carrying out an independent investigation into Russia’s arrest and the disproportionate force that led to the death of 83-year-old Vedzhie Kashka, a revered veteran of the Crimean Tatar national movement.   In an interview given while it was still unclear whether the men were being moved or not, Polozov said that it was difficult to talk about ‘jurisdiction’ in this case, and that, “if no political decisions are taken”, even establishing where the ‘trial’ is to take place could take several months. From the point of view of international law, he explained, and the position of the Ukrainian government, the detained sailors are prisoners of war and their treatment is regulated by the Geneva Convention on POWs. Russia is, however, trying to treat them as though suspects of ordinary criminal prosecutions.

“It is important to understand that from the point of view of that same international law, Russia is continuing to carry out a war crime in respect to these sailors, and violating the [Geneva] Convention. This case at the end of the day falls within the jurisdiction of the International Criminal Court”.  He noted that certain political consequences were already being seen, with the cancellation on 29 November of US President Donald Trump’s planned meeting with Russian President Vladimir Putin.  He assumes that the reaction of other western countries will be forthcoming.

“We have information that physical force was used against the sailors during the seizure, and that they were beaten.  We do not know definitely what kind of influence was brought to bear on the sailors who recited before a prompter ‘testimony’ which the FSB then circulated.  We should recall that access by lawyers to the detained men was seriously restricted and remains so to the present time. I am absolutely convinced that psychological pressure was brought to bear in order to force them to testify against one another in order to make the ‘investigators’’ work as easy as possible.  This is my personal conclusion, based on experience of the work of the FSB”.

Polozov was not alone in making such assumptions after the FSB produced videos of three naval officers ‘admitting’ to having illegally crossed into Russian territorial waters.  The videoed ‘confessions’ were nearly identical to those produced in the cases of most Ukrainian political prisoners.  On virtually all such occasions, attempts have been made to prevent independent lawyers from seeing the men.  When they have finally received access to real defence, most have stated that the ‘confessions’ were given under torture.  It has also been noted in many cases that the imprisoned men have ended up convicted of ‘crimes’ that bore very little resemblance to their supposed confessions which had been widely shown on Russian propaganda channels.

Emil Kurbedinov reported soon after the men had been seized that a campaign seemed to be underway to discredit lawyers representing the men.  Polozov notes that, despite this, it had been possible to swiftly organize a team of lawyers, many of whom, as mentioned, are all too experienced in defending the victims of Russian legal nihilism.

The decision by the US President to cancel the planned meeting with Putin came very late in the day and followed some rather ambiguous statements.  The reaction from other western leaders has been categorical in condemnation, but extremely short on detail as to measures to stop this latest aggression by Russia.  The latter is at present completely blocking the Azov Sea to Ukrainian vessels.  If allowed to continue, this will mean further encroachments into Ukraine’s sovereign territory and scope for even more serious attempts to destabilize Ukraine.

Update:  On 30 November the de facto Crimean ombudsperson confirmed that all 24 men had been taken to Moscow.