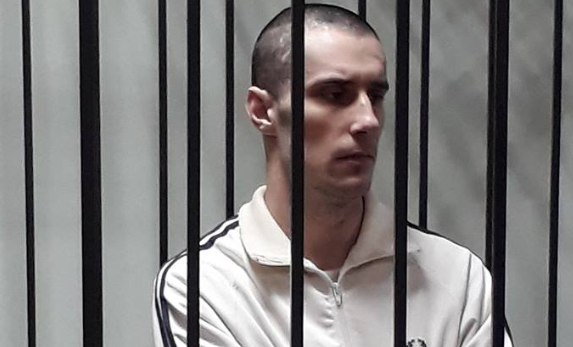 A Russian court has sentenced Oleksandr Shumkov to four years’ imprisonment, despite strong evidence that the 29-year-old Ukrainian was abducted to Russia and the totally surreal charges of involvement in ‘Right Sector’, a Ukrainian nationalist party while in Ukraine.  During his final address to the court, Shumkov pointed out that he was charged with activities which he had never denied – of involvement in Euromaidan and then in Ukraine’s operation against the militants in Donbas.  By bringing criminal charges based on the assertion that such activities “threatened Russia’s interests”, he said, “the Russian Federation is acknowledging its presence on Ukrainian territory”.

It was on 26 September, 2017, over a month after he vanished, that Larisa Shumkova received a letter from the Russian FSB for the Bryansk oblast saying that her son was being held in the Bryansk SIZO [remand prison] on suspicion of “committing a crime” under Article 282 § 2 of the Russian criminal code – ‘involvement in an extremist organization’.

Shumkov had taken part in Euromaidan and in 2014 was a guard for Dmytro Yarosh, the then leader of Right Sector, before joining the Armed Forces.  Although he was no longer a member of Right Sector in 2017, his former Maidan activism, his high profile for Russia because of his link with Yarosh, as well as his current military role all made it clearly dangerous for him to go to Russia.  Shumkov would have also been aware of the political trials and huge sentences passed on Ukrainian filmmaker Oleg Sentsov and left-wing activist Oleksandr Kolchenko on fake ‘Right Sector terrorist plot’ charges, and have understood the zero likelihood of a real trial.

In his capacity as investigator for the military prosecutor, Shumkov is believed to have set off for a meeting with an informer who was supposed to provide information about supplies of drugs smuggled from the Kremlin-backed ‘republics’ in Donbas to government-controlled oblasts.  The car in which he was driving came under attack near the Russian-Ukrainian border.  A taser gun was used against Shumkov, who was taken, unconscious, across the border into Russia. During his final address, Shumkov said that he regretted only having let himself be duped by the Russian security service whom he clearly sees as being behind the abduction.

It was not only the charges that were surreal, with the so-called ‘witnesses for the prosecution’ only stating what Shumkov had never denied, namely that he had, in 2014, been a member of Right Sector.

Even so, Russia still resorted, as it has in most political trials of Ukrainians, to ‘secret witnesses’, as well as to the testimony from a person who had a vested vested interest in saying what the prosecution wanted.

The prosecution, led by Vladimir Minakov, also made primitive mistakes. An FSB officer, Ruslan Kokulov, was brought in to testify that Shumkov had told him “at the border” that he had been a guard for Yarosh, and photos were shown of Yarosh and Shumkov together, and a video of a press conference given by Yarosh in April 2014.  Indeed Shumkov, who has a legal education, thanked Minakov for proving his innocence through such ‘exhibits’ which dated back to before Russia banned Right Sector.  By November 2014, Shumkov pointed out, he was serving in the Ukrainian Armed Forces and had no connection with Right Sector.

One of the ‘secret witnesses’ had claimed to have seen Shumkov at the Chonhar checkpoint on the administrative border with Crimea during the Crimea Blockade in September 2015, and that Shumkov had been giving instructions to 7-10 people. It transpired that he had not heard these instructions, but claimed to know that this was what Shumkov had been doing because he was told this by an SBU [Ukrainian Security Service] officer who had infiltrated Right Sector.  How the latter was supposed to have known is not revealed.

The prosecution’s ‘key witness’ was a Ukrainian from Kherson called Mykhailo Allanazarov who claimed that Shumkov had taken part in Right Sector protests (around five) in the Kherson oblast right up till 2017.

Allanazarov is a deserter facing criminal charges in Ukraine for trading in weapons and drugs, and had a clear motive for providing the testimony demanded of him.

‘Investigators’ from the Bryansk Oblast Investigative Committee asserted that Shumkov “took an active part in the activities of the Ukrainian extremist organization ‘Right Sector’ directed against the interests of the Russian Federation and encroaching upon its territory integrity”.

They could come up with nothing better than to claim, with zero credibility, that Shumkov had been detained in August 2017 by Russian border guards in the Bryansk oblast as he tried to enter Russia.  There would, in fact, have been no grounds for detaining him, even had this been true, since he was not on any wanted list.

In his final address, Shumkov called his imprisonment “punishment not for what I did, but punishment for my position which I held, and still hold, regarding the future of my country.”

He knows that his very life could be in danger in a Russian prison because of his firm stand, but says that if he returns alive to Ukraine, he will make maximum effort “both possible and impossible” to change the current situation where Ukraine is not a subject on the international arena, but the object of political relations.

After arguing, as noted above, that Russia’s prosecution of him is admission of its presence in his country, Shumkov also pointed out the absurdity of a situation whereby Russia’s Supreme Court ruling banning Right Sector in Russia was being treated as a carte blanche for imposing a ban on Right Sector in other countries.

Russia is certainly acting in a lawless manner, as the acting president of the Sevsk District Court in the Bryansk oblast Viktor Rukhmakov was well aware when he passed the same knowingly wrongful 4-year sentence in a medium security prison demanded by ‘prosecutor’ Minakov.

Shumkov has already been imprisoned for a year and a half in a SIZO [remand prison] and will remain there until the appeal hearing is over.