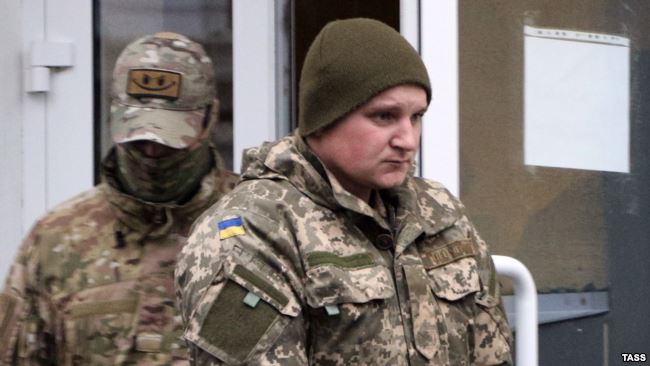 Russia’s FSB has claimed that one of the Ukrainian POWs seized during the attack on three Ukrainian naval boats in the Kerch Strait may have tortured somebody now living in the self-proclaimed ‘Donetsk people’s republic’ [DPR].  This was one of the most absurdly irrelevant accusations to come out of an FSB briefing on 8 December, but one worth noting since it echoes a claim made in 2014 where Russia was also in evident breach of international law.  Then Russia had abducted Ukrainian military pilot Nadiya Savchenko, following her capture by Russian-controlled militants in Donbas, and put her on ‘trial’.

Nikolai Polozov, lawyer for one of the 24 men whom Russia took prisoner on 25 November and is now accusing of ‘illegally crossing Russia’s border’, has every reason to see the déjà vu, since he represented Savchenko throughout her ‘trial’ and appeals.  Although it was the other fabricated charge that Russia concentrated on in Savchenko’s case, the charge of ‘illegally crossing the border’ was also added to cover up the fact that Russia had kidnapped her from Ukrainian territory.

Back in 2014, an individual identified as Volodymyr Moretsky, a ‘Donetsk resident’ claimed to have seen Savchenko on television and recognized her as a person who had savagely tortured him.  This was widely circulated by Russian propaganda channels to try to discredit Savchenko, amid international demands for her release.  The same channels made no effort, of course, to set the record straight after it was demonstrated that Moretsky’s story had no basis in fact.

It is possible that the claim this time, from an unnamed individual in ‘DPR’, will be quietly forgotten.  It certainly appears to serve no purpose but to emphasise the presence of two Ukrainian Security Service [SBU] officers on the naval vessels.  Russia has tried to make much of their presence, although it could not possibly serve as justification for Russia’s aggression in ramming,  firing upon and seizing Ukrainian naval boats in breach of the 2003 treaty regarding access to the Azov Sea, and international law.

Russia’s actions have been internationally condemned as an act of aggression. The motives are also clear: namely to seize control over the Kerch Strait, and to block Ukraine’s access to major ports in Mariupol and Berdyansk, with this having, at very least, a disastrous effect on Ukraine’s economy.

Despite Russian behaviour since May this year having left nobody in any doubt about such motives, both the Russian Foreign Ministry and Duma deputy Leonid Kalashnikov had both claimed, just days before 25 November, that it was Ukraine who was planning ‘provocation’ in the Kerch Strait or Azov Sea.

That theme has been pushed ever since, by Russian President Vladimir Putin, by high-ranking Russian officials and by the media.

It is the fact that Putin has so clearly indicated the line to be taken that now presents the FSB with the insurmountable task of coming up with a good ‘provocation plot’.

At the same briefing on 8 December, Alexei Volsky, deputy head of the FSB Coast Guard Service, claimed the Kerch Strait had been blocked to the Ukrainian naval vessels to “prevent an act of provocation” which could be carried out, including towards to Crimean Bridge.

The word ‘provocation’ was repeated several times, but in hypothetical mode and without a shred of evidence being provided to back the claim.

What seems more likely, unfortunately, is that attempts will be made to influence the 24 Ukrainian POWs, now held under effective FSB control in Moscow.  Polozov spoke in a Radio Svoboda interview about the need to carry out full checks on all the men’s lawyers whom he will be coordinating.  It is quite likely that the FSB would seek to infiltrate the defence and they will certainly try to break down the men and the defence’s single position for all of them.

This has, in fact, already been seen when the FSB took no time to circulate videos in which three of the highest-ranking men recited texts in which they spoke of the boats having “entered Russian territorial waters”.  That the men had been forced to do this was evident and the only question mark is whether the men were physically tortured into making such ‘confessions’, or psychological pressure was applied.

It is therefore vital that each man should have a lawyer, and that all 24 lawyers should work as one united team.

In fact, it is most important that western countries use maximum influence to ensure that the Kremlin makes the political decision to release the 24 men.  Polozov is certainly not alone in believing that one man alone, Putin, holds the key to their release.

If that does not happen, Polozov says he cannot exclude the possibility that Russia will try to bring new charges.

Everything about the seizure of the men on 25 November, he says, is like what Somali pirates or terrorists do, not a normal country.

Russia’s attempts to claim that the men are not prisoners of war because no war has been declared cannot be justified.  According to the Geneva Convention on the Treatment of Prisoners of War, if military or naval servicemen were in service, wearing uniforms and insignia, and were seized as the result of an act of aggression, they are unquestionably prisoners of war.

Russia is committing crime after crime with respect to these 24 Ukrainians.  They should not have been imprisoned in a SIZO, or remand prison, nor should ordinary courts (in this case, de facto courts in occupied Crimea) have been allowed to pass any ruling.  The men have been separated in Moscow and are being held in different cells, forced to wear prison clothes and remove their insignia, all of which is in breach of their status as prisoners of war.

Yevhenia Eyder, whose son Andriy, injured in Russia’s attack, is shortly to turn 19, has asked everybody to write to all of the men.  They need our support.

If writing in Russian is problematical, there is a crib letter below which you could send, together with a picture, or similar.