Russian proxy Donetsk ‘republic’ moves to plunder Ukrainians who don"t take its ‘citizenship’Ukrainians forced to take Russian citizenship, or lose their homes in occupied Crimea Putin’s Russian passport aggression against Ukraine fizzles in occupied DonbasBalukh describes torture in Russia and attempt to foist Russian citizenshipEU is preparing to refuse recognition of Russian passports illegally issued to Donbas residentsPutin extends Russian attack on Ukraine, offering passports to all Ukrainians in DonbasUkraine will only help Russia by stripping Donbas residents who take Russian citizenship of their pensionsRussia denies that political prisoner Balukh has Ukrainian citizenship after jailing him for not betraying UkrainePutin offers Russian passports in occupied Donbas in new act of aggression against UkraineCritic of Russia’s aggression against Ukraine gets 3.5 year jail sentenceRussia sentences Ukrainian soldier to 4 years for political engagement in UkraineUkrainian court orders that rights activist persecuted in Russia for pro-Ukraine views be granted asylumUkrainian gets prison sentence in Russia for peaceful protest in UkraineRussia occupies Crimea and deports Ukrainians for refusing Russian citizenshipUkrainian gets jail sentence in Russia for involvement in a legal organization in UkraineUkrainians deported from occupied Crimea for rejecting Russian citizenshipUkrainian jailed as ‘extremist’ in Russia for a Facebook post asking for tyresSchool kids intimidated in Russian-occupied Crimea as Crimeans refuse to reject Ukrainian citizenshipNew law in Ukraine would strip citizenship of Crimean victims of Russian occupationRussia protects suspected Maidan killers “for reasons of national security” while abducting Maidan activists
• Topics / On refugees 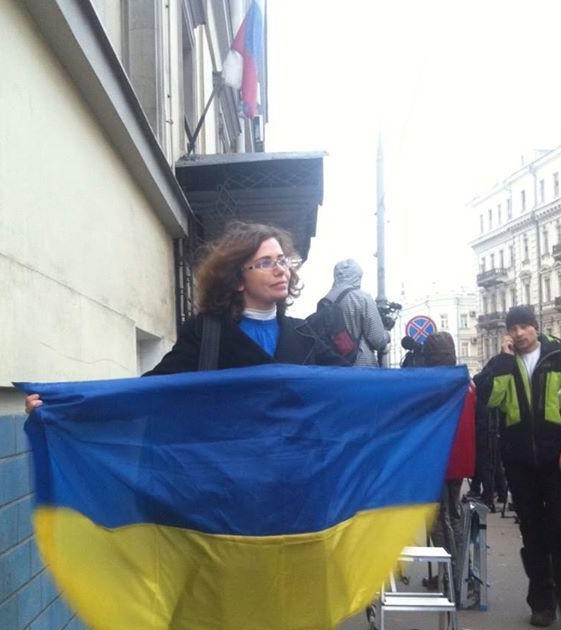 The ways of Ukrainian officials are truly unfathomable.  This time they have stripped a human rights activist who risked arrest while in Moscow for opposing Russian aggression against Ukraine of her Ukrainian citizenship.  They did not even bother to inform Olena Hlushko of this, leaving her to discover it the hard way when travelling to Moscow to support Denis Bakholdin, who is on trial effective for his support for Ukraine.

Hlushko was involved in civic activism in Moscow, including protests after Russia’s invasion of Crimea, demanding an end to the aggression and the release of the Kremlin’s Ukrainian political prisoners.  She was detained on several occasions for such protests.

Since Hlushko was entitled to citizenship through ethnic origin, she went through the procedure in 2015 and registered her new citizenship at the Ukrainian embassy in Moscow. She left Russia soon afterwards, and has lived in Ukraine ever since, working for Donbas SOS, an NGO which helps displaced persons and other victims of the military conflict, as well as studying Law.

Ukraine does not allow dual citizenship, and Hlushko therefore, in full accordance with the law, sent her passport to the Russian embassy, and informed the Ukrainian embassy of this by email.  Since Ukrainian legislation does not spell out any procedure for renouncing citizenship, it cannot be said that this was the wrong means of notification.

It turned out, however, that the Ukrainian embassy in Russia had, back on 27 April 2017, cancelled her citizenship without informing her.   This, the Ukrainian Foreign Ministry has since claimed, was because the Moscow embassy had not received notification from her that she had renounced her Russian citizenship.

Had they bothered to inform her, they would have received the notification which she had already sent by email once.   Instead, Hlushko learned that she had been made a stateless person on the night train to Moscow 15 months later, on 21 July 2018.  Her only passport, as citizen of Ukraine, was taken away from her by the Ukrainian Migration Service.

Glushko’s lawyer Oleksiy Skorbach points out the huge number of violations that the authorities have committed, of both Ukrainian and international legislation. Ukraine’s Constitution states unambiguously that “a citizen of Ukraine shall not be deprived of citizenship and of the right to change citizenship.” Ukraine’s Law on Citizenship expressly prohibits depriving a person of their citizenship if this will make them stateless.

Even if the Ukrainian embassy in Moscow believed, wrongly, that Hlushko had not renounced her Russian citizenship, it was still not their place to take any decision.  They have such authority only where a person is living abroad, and Hlushko has been living in Ukraine since 2015.  It was for the Migration Service to decide any such issues, though, once again, after consulting Hlushko, who would have presented them with the evidence that she had renounced her Russian citizenship.

Hlushko and Skorbach are seeking justice for her via the court, and hope to demonstrate that the embassy exceeded its authority by depriving her of her citizenship.

In the meantime, however, Hlushko is unable to visit the ‘trial’ of Denis Bakholdin and give him badly needed support from Ukraine.

Like Hlushko, 37-year-old Bakholdin opposed Russia’s aggression against Ukraine and criticized the regime of Russian President Vladimir Putin, taking part in many protests in Moscow.  He too moved to Ukraine in 2014, clearly hoping to make this permanent,  Unfortunately, his mother was ill and he tried to visit her in Russia in March 2017.  He was seized by Russian border guards on March 9, and has been held in Russian custody ever since, with his mother officially informed on March 17 that her son had been arrested in Russia, supposedly “while trying to illegally cross the Russian-Ukrainian border”.

I hate to tell you, but the Canadian bureaucracy has done equally stupid things in other areas. This was clearly a case of the right hand not knowing what the left hand was doing. . . and possibly the Russians deliberately not informing Ukrainian authorities that the persosn had given up her Russian passport. I don’t think it makes sense to make scandals out of a buraucratic mix-up. Hlushko/Glushko should be helped to have her citizenship restored. Period.

I think you’ re right that this was not a deliberate attempt to deny somebody their citizenship, however the problem has not been rectified, hence the attempt to make it public, since that sometimes helps (HC)