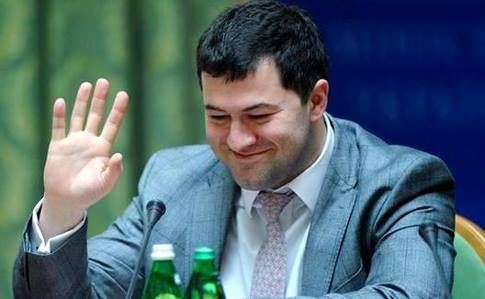 So when should we expect the District Administrative Court to reinstate Viktor Yanukovych?  This reaction from Acting Health Minister Ulyana Suprun was one of many sour comments following the news on 11 December that this Kyiv-based court had reinstated Roman Nasirov to the post of Head of the State Fiscal Service.  He was initially suspended in March 2017, following his very high-profile arrest on serious embezzlement charges, and then dismissed in January this year.  Both suspension and dismissal were on the basis of decisions by the Cabinet of Ministers and the latter has said that they will seek to challenge the District Administrative Court’s ruling.

The motivational part of the ruling has yet to be made public, however it appears that Nasirov’s lawyer had applied for his reinstatement on the grounds of procedural infringements over his dismissal.  MP Andriy Zhurzhiy reported that, “judging by the behaviour of one of the panel of judges”, the court had doubts as to whether Nasirov does have a British passport.

This is relevant since the second Cabinet of Ministers decision, from 31 January 2018 gives the (apparent) fact that Nasirov has dual citizenship, which is not allowed in Ukraine, as grounds for his dismissal.

However, on 6 March 2017, NABU – Ukraine’s National Anti-Corruption Bureau – reported that the British National Crime Agency had confirmed that Nasirov had become a UK citizen in May 2012.

This was claimed to be a fake by Nasirov himself, however Judith Gough, the UK’s Ambassador to Ukraine seems to have confirmed that the NCA letter was genuine.

Even if something has gone wrong and the court was presented serious evidence for doubting Nasirov’s British citizenship, it is hard to see how this would justify overturning Nasirov’s original suspension, reinstating a person accused of serious abuse of his position, and even compensating him for the time he was dismissed.  Nasirov and his lawyers had only challenged the 31 January decision to dismiss him, not the earlier decision to suspend him.

Since Nasirov has not been convicted of any crime, dismissal on any other grounds, but dual citizenship, would risk breaching his right to be assumed innocent, until proven guilty.  Given his post, and the fact that the alleged offences were committed while he occupied it, suspension from duties would probably be standard in any country.

If it does transpire that the court had been left no choice but to reinstate Nasirov because of some other procedural infringement, there should surely be questions asked about how this happened.  Over recent years there have been numerous such cases where, for example, judges dismissed for passing knowingly wrongful rulings against Maidan activists have gone straight to the Supreme Court which overturned the dismissals due to irregularities.

Mykhailo Zhernakov, Director of the DEJURE Foundation clearly sees no reason to seek charitable interpretations for the 11 December ruling.  His blistering comment begins with the words: “No, this is no joke”, and goes on to point out that there is nothing surprising about such rulings from the Kyiv District Administrative Court.  He asserts that this is a court that was created by the system established (under Yanukovych by Andriy Portnov and Serhiy Kivalov “specially in order to pass politically biased rulings.

A court in which not one judge has been dismissed, despite the fact that these judges banned Euromaidan and order the Berkut special forces to disperse it, and then received apartments for this from our money”.

Even the so-called judicial reform that we have, he goes on to say, has not had any impact on this court’s staffing or organization.

Zhernakov says he is willing to bet that there will be no adverse consequences for the judges who passed the ruling on reinstating Nasirov.

“While those in power leave such judges in their posts and continue to use them for their purposes, traitors and those involved in corruption will continue to hold their posts.  And we will have no hope of progress”.

Nasirov was arrested in early March 2017 on charges of abuse of position and embezzlement which is alleged to have cost the state two billion UAH.  He was ordered then to give up his foreign passport, and the court even remanded him in custody.  Bail was, however, allowed, but very steep (100 million UAH).  This was promptly paid by Nasirov’s wife.

Nasirov was an MP (part of the Bloc of Petro Poroshenko) for a year before becoming the top tax official in the country.  He was suspended on 3 March 2017, with criminal proceedings initiated by NABU.  The charges pertain to tax shenanigans which allegedly helped former MP Oleksandr Onyshchenko who is in hiding abroad.

Since Onyshchenko is out of reach, Nasirov would be the highest-ranking official under the current administration to face corruption charges.

Ukraine’s fairly dismal record on bringing people in power or with position to answer means that court hearings on preventive measures have a tendency to turn into something of a circus.

As has happened on many such occasions, Nasirov was wheeled into court from the cardiac unit of the Feofania Clinic. He was forced to spend at least one night in the courtroom with MPs and activists preventing him from leaving, fearing that he, like Onyshchenko, would immediately flee abroad.  If this should seem unreasonable given his apparent state of health, it should be noted that he himself suddenly got up and walked just before the court hearing was to begin, although his lawyers had claimed that he had had a heart attack and had been operated upon. Later, the then 38-year-old Nasirov refuted this, saying that, in fact, he had simply suffered a hypertensive crisis.

Nasirov, incidentally, stated in July this year that he is planning to put himself forward as candidate in the coming presidential elections.

There were a lot of very upbeat statements made after Nasirov’s arrest, with the prosecution of such a high-ranking official viewed as a watershed.  The prosecution is continuing, but after Tuesday’s ruling, optimism is distinctly muted.