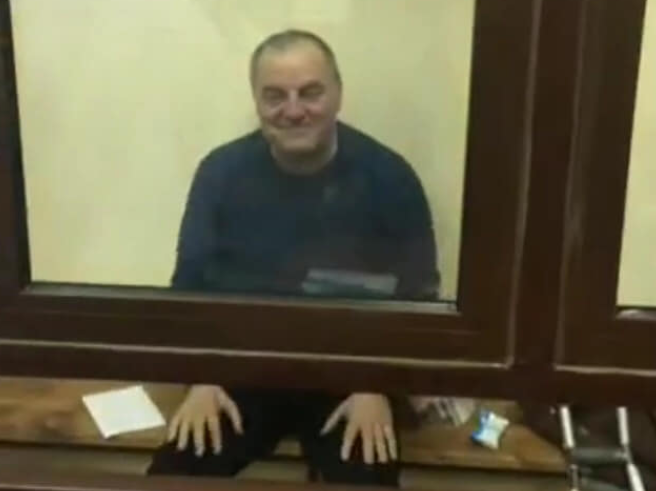 A ‘court’ in Russian-occupied Crimea has remanded 58-year-old Edem Bekirov in custody for two months, after he was seized by the FSB on 12 December when he tried to cross into Crimea to visit his elderly mother  Bekirov has an artificial leg, diabetes and last year suffered a serious heart attack.  He is, however, also married to a member of the Mejlis of the Crimean Tatar people which Russia is persecuting.  That would seem to have been enough for the FSB to concoct a story about transporting weapons based solely on the ‘testimony’ of an anonymous individual.

It transpired on 13 December, after Bekirov had reportedly been held for well over a day without water or food, that the FSB are charging him with circulating and transporting more than 10 kilograms of DNT and 190 bullets ((under Article 222 § 2 of Russia’s criminal code).

According to a supposed ‘witness’ (identified only by his last name, ‘Memetov’), Bekirov passed the explosives and bullets to him in May of this year. Memetov purportedly placed them in a secret hiding place around Krasnoperekopsk and then in August revealed this place to the Russian FSB and gave testimony against Bekirov.

There have been several cases where the FSB has seized and tortured men in order to extract ‘confessions’, sometimes getting them to sign multiple blank ‘confessions’, and this story, which lacks any credibility, could be such a case. Bekirov was coming to visit his mother and other relatives.  He himself is in very bad health and the idea that he could have brought such a quantity of explosives, etc. is simply preposterous.  Even were one to imagine that he might want to, the chances of a person with close links to the Mejlis being stopped and checked by the FSB were enormous.

There was nothing at all to indicate that Bekirov was on any wanted list, and it is difficult to not assume that the FSB took the chance of trumping up charges after they stopped Bekirov at the border crossing early on 12 December.

Bekirov is a well-known member of the Crimean Tatar community in Novoaleksiyivka in the Kherson oblast and there was widespread concern after he disappeared for many hours after being stopped at the border crossing by the FSB.  It was only into the evening that he was able to ring his wife.

It seems clear that the initial suspicions were correct that this is yet another attempt by the FSB to fabricate ‘proof’ of ‘extremism’ against the Mejlis to try to justify its flagrant refusal to comply with the ruling from the UN’s International Court of Justice.  The Court back on 19 April 2017 allowed Ukraine’s application for provisional measures with respect to Russia’s discrimination against Crimean Tatars and ethnic Ukrainians.  One of the specific orders was that Russia withdraw its extraordinary ban on the Mejlis, which is the self-governing body of the main indigenous people of Crimea.

The FSB were doubtless well aware that Gulnara Bekirova is a member of the Mejlis.

This would not be the first time that the FSB has seized well-respected Crimean Tatars and used the state-controlled media to both stress real or fictitious links with the Mejlis, and to push the clam that these are ‘ordinary criminals’.  This was very evidently the aim behind the arrest of four Crimean Tatars on 23 November 2017 and the gratuitously violent attempt to arrest 83-year-old veteran of the Crimean Tatar national movement, Vedzhie Kashka which resulted in her death.  On that occasion, the media even claimed, citing an anonymous ‘law enforcement official’, that “machine guns and drugs” had been found during searches.  Four men in their 50s and 60s: Kazim Ametov; Asan Chapukh;  Bekir Degermendzhy; and Ruslan Trubach remain imprisoned, despite extremely serious grounds for concern about the health, possibly life of both Chapukh and Degermendzhy, as well as the lack of any substance to the charges.

Bekirov’s arrest is a new escalation involving Crimean Tatars entering or returning to Crimea.  On 15 November, the Russian FSB detained prominent Crimean Tatar activists Nariman Dzhelyal and Lenora Dyulbar, as well as delegate from the Qurultay Lemmar Yunusov, and former Qurultay delegate Mustafa Asab.  Al were held for very many hours, though they were eventually released without any attempt to bring charges.

It has become extremely dangerous for many Ukrainians to return to occupied Crimea, with this a particular tragedy for those whose elderly parents or other relatives remain there.  If this is true of all Ukrainians forced to leave after Russia’s occupation, it is particularly acute for Crimean Tatars for whom the return to their homeland was so important after the Deportation of the entire Crimean Tatar people in 1944.

Following arrests of Ukrainians while visiting Crimea in 2016, the Crimean Human Rights Group issued advice to people planning to travel to Crimea. Although the underlying advice has increasingly been to not even risk it, they give helpful suggestions for those who see no choice but to take the risk.  These include suspending all social network accounts since these are closely followed, with any criticism of the Russian authorities, any publications expressing a pro-Ukrainian position, photos from Maidan, or with Ukrainian soldiers, etc. likely to be qualified by the FSB as ‘extremist’ or ‘terrorist’. The FSB will also pay attention to who your friends are on social networks.

Advice is given on cyber security if you are unable to suspend your account, and people are told to avoid taking smartphones with them unless you want to share information about yourself and your friends with the FSB.

All of this is very Soviet, but none more chillingly so then the warning that the people you speak with in Crimea could write a denunciation to the FSB against you, with this positively encouraged now by the occupation authorities.