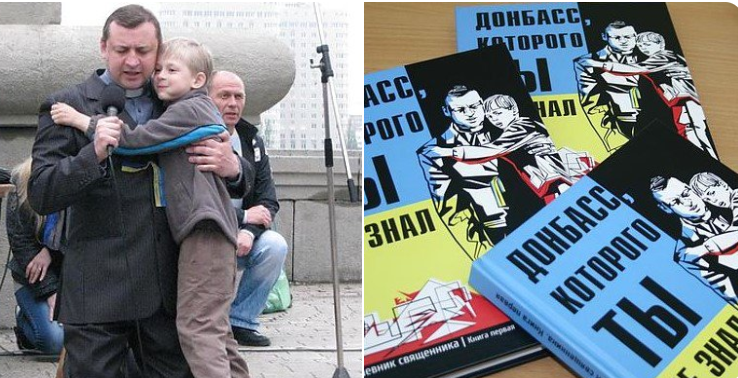 Ukrainians from Donbas, many of whom have paid a huge price for their courage and commitment to Ukraine, are tired of stereotypes about Donbas residents being ‘pro-Russian’ and claims that they brought the events of the last five years upon themselves.  It was to set the record straight that Sergey Kosyak, Ukrainian pastor, volunteer and one of the coordinators of the Donetsk Prayer Marathon decided to publish an important book chronicling resistance to Russia’s aggression.

Kosyak’s book “The Donbas which you didn’t know” is based on social media records on the events in Donetsk from 20 February 2014 to July 2015.  That includes the 158 days of the Prayer Marathon for peace and Ukrainian unity in the centre of Donetsk, and it was appropriate that he was joined in presenting the book by two of the other participants in that Marathon, Said Ismagilov, Mufti of the Spiritual Directorate of Muslims of Ukraine and Ihor Kozlovskyy, a religious specialist and former hostage.

At the presentation, Kosyak explained that if his Facebook posts back in 2014 had been spontaneous responses to what was happening, he has now reached a conscious and thought-out decision to publish them.  He can no longer calmly swallow the accusations levelled at Donbas residents that they did nothing to combat Russian aggression and save their cities from occupation. There is a general belief that the residents of Donbas in their masses supported and welcomed the seizure of their cities.

He said he has even seen the claim in a school textbook that there had been Euromaidan protests everywhere in Ukraine, except in Donetsk and Luhansk.

His book, he hopes, will demonstrate who did what, including what role was played by members of different churches. “Half a loaf of bread is still bread, but half the truth is a lie!”.

It is a lie that hurts, especially when many of those who resisted suffered torture and imprisonment.  Of the participants in the Prayer Marathon, 16 were at various times taken captive, with 5 of them subjected to mock executions and many, including Kosyak himself and the late Pastor Oleksandr Khomchenko, savagely tortured.

Said Ismagilov escaped a similar fate only thanks to Khomchenko who, after having been tortured for nine days, hurried as soon as he was released to Ismagilov to warn him that he was next in line.

During the presentation, Ismagilov also rejected any denial that there had been a Maidan and later resistance in Donetsk.  “There were Ukrainian rallies to which people came armed only with Ukrainian flags, and they were beaten or killed. We did all of that because we wanted people in Kyiv to see us, to see that we were there and fighting, and that we needed help.  Yet we were abandoned.”

Ihor Kozlovskyy described how, when Donetsk had been totally seized by militants and many had been forced to flee, including all the priests and pastors, he was forced to take the lead at the prayer gatherings.

Kozlovskyy’s elder son is paralyzed, and he had remained in Donetsk even after it had clearly become very dangerous.  He was seized by the so-called ‘DPR ministry of state security’ in late January 2016, and only released in the prisoner exchange on 27 December 2017.  One of the absurd charges that the militants brought against Kozlovsky was over his participation in the Prayer Marathon.

“Resistance through prayer to the Russian invasion and the armed formations which in 2014 united Catholics and Protestants, believers from the Orthodox Church of the Kyiv Patriarchate and Muslims under the Ukrainian flag was a phenomenon of our modern history that has yet to be fully understood”, Kozlovskyy said. “People’s memory fades and the witnesses of events disappear, with new heroes of the continuing hybrid war emerging. It is therefore of enormous importance to have the recollections of direct participants of the already legendary Donetsk inter-faith Prayer Marathon”.

Although ‘The Donbas which you didn’t know’ is Kosyak’s first book, he has long been speaking out publicly about the false assumptions people make about Donbas.

There was undoubtedly much less widespread support for Euromaidan in Donetsk and Luhansk than in many other Ukrainian cities, but it was there.  At some point, Kosyak earlier noted, local oligarch structures (connected with the ruling Party of the Regions under Yanukovych) began organizing anti-Maidan meetings.  Then “somebody consciously started pushing the idea that “we have to defend ourselves. That they’re coming for us, and that the Maidan in Kyiv will certain come to us.  And then a large part of the people got frightened.  Some did it for money, admittedly, however others began defending themselves from witches that don’t exist”.

Initial attempts to seize control in Donetsk were by local pro-Russian activists like Pavel Gubarev, who had earlier been a member of the neo-Nazi and chauvinist Russian National Unity movement.  Gubarev took part in a big demonstration on March 1 in Donetsk during which he was supposedly elected “people’s governor”.  On that and subsequent days Gubarev led crowds in storming the Donetsk regional administration building, hanging a Russian flag.

It became clear much later, especially after the publication by Ukraine’s Security Service [SBU] of the ‘Glazyev tapes – intercepted conversations between Sergei Glazyev, an adviser to Putin, and various individuals in Ukraine, that a major part of Russia’s tactics in Ukraine were based on ‘encouraging’ apparently local uprisings.

In fact, Gubarev’s uprising was nipped in the bud by the SBU, and though Russia tried to make him into a persecuted hero, the ‘people’s uprising’ would likely have ended by around 6 March, as would other disturbances.

There were certainly violent clashes, especially after ‘tourists’ of particularly athletic build began swarming into Donbas from Russia.  It was, however, only with the seizure of Sloviansk on 12 April by Igor Girkin, a Russian (possibly) former GRU or military intelligence officer and his men that the situation really changed and swiftly turned into a war.  Donetsk was taken over in June with the Chechen mercenaries who appeared in the centre of the city not even trying to conceal their identity.

Kosyak recalls that it was with the appearance of Strelkov and his men that the Russian security service also began playing a role.  He says that of his people who ended up in captivity, some were interrogated by FSB officers who did not conceal their identity.

Kosyak’s account here is backed by a study carried out by the Coalition ‘Justice for Peace in Donbas’.  In their report, “Those who went through hell’, they reported that  over 87% of Ukrainian soldiers and 50% of civilians taken prisoner by the Russian-backed, pro-Russian militants in Donbas had been subjected to torture or ill-treatment.  In over 40% of the so-called ‘interrogations’, key roles had been played by mercenaries from the Russian Federation or people who identified themselves as Russian military personnel.