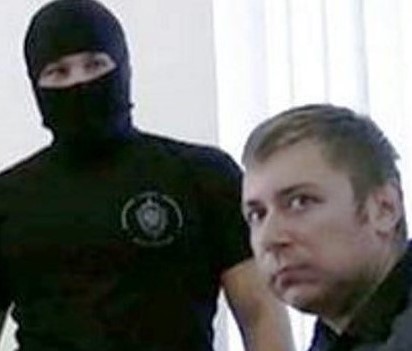 Ukrainian political prisoner Valentin Vyhivsky has been held in a Russian punishment cell for the last 10 months in appalling conditions and without any telephone contact with his family.  He has been told he will remain in such solitary confinement until the end of his 11-year sentence, with Russia clearly wanting to prevent him from having contact with his family and with other prisoners.

Petro Vyhivsky says that they have contact with their son only via letters, many of which are not getting through.  Any correspondence is read by the prison authorities, meaning that Valentin is not only silent about conditions to not worry his wife and parents, but because he would face reprisals for his openness.

Vyhivsky has effectively been held in solitary confinement since he first arrived at the prison colony, however imprisonment in a PKT, a cell normally used as a punishment, was initially claimed to be for his safety, with the normal restrictions on telephone calls, etc., not applied.

That suddenly changed in February 2018, probably because his wife was planning to visit him.  The family learned that he had been placed in a punishment cell “for six months”, with this meaning a clamp on visits, parcels and telephone conversations.  There are not supposed to be restrictions on correspondence, however Petro Vyhivsky is aware of several letters that have not got through.

Even if there had been grounds for the initial severe 6-month penalty, there can be none for holding Vyhivsky in effectively permanent solitary confinement.  His lawyer is planning a visit in January, and should surely consider applying to the European Court of Human Rights over conditions that cannot possibly be justified and that amount to torture.

Vyhivsky is permanently held in a cell which is designed as a punishment measure.  During the day, he can only sit on a bench very close to the floor, and is forced to even write letters from that position.  There are draconian restrictions on the amount of money he can spend in the prison shop where prices are very high.  This means that if people don’t send envelopes and (if writing from Russia) stamps, he cannot afford to buy them himself so as to write back.  He also has no possibility of even supplementing the appalling food provided.

Although most Ukrainian political prisoners held in Russian prisons are subjected to arbitrary punishments, including periods in punishment cells, there seems to be a particular aim in Vyhivsky’s case of holding him in virtually total isolation.  It is hard not to conclude that Russia has a lot to conceal – regarding how he was abducted, the highly implausible ‘spying’ charges against him, and the torture used to force him into ‘confessing’ to the charges.

The FSB particularly likes ‘spying’ cases since even the ‘trials’ can be held behind closed doors.  Many other Ukrainian political prisoners have also had ‘confessions’ tortured out of them while imprisoned incommunicado, but they have later had real lawyers and a chance to expose the lack of any evidence and use of torture.  In Vyhivsky’s case, virtually nothing was known about him until after the 11-year sentence, and to this day his family has no idea what his ‘spying’ was supposed to entail.

Vyhivsky is a graduate of the Electronics Faculty of Kyiv Polytechnic and was also active in the Euromaidan protests.  He has been fascinated by aviation since childhood and spent a lot of time on the Internet chatting with other enthusiasts, many of whom are in Russia. It seems likely that one of the enthusiasts, fearing that they could be accused of suspicious contact with a Ukrainian, and one who had taken part in Euromaidan, could have themselves ‘reported’ him.  It is known, for example, that he went to Crimea in September 2014 after having been asked to ‘help’ an acquaintance.  If this was, indeed, a trap, it would not be the only such occasion where the Russian FSB has used such methods to capture Ukrainian political prisoners.

Vyhivsky was seized at Simferopol railway station on 17 September 2014 by armed paramilitaries who clearly handed him to the FSB.  He was taken against his will to Russia where he was held incommunicado for eight months, without a proper lawyer or contact either with the Ukrainian consul or his family.

The fluid charges must already arouse suspicion, as does the fact that they held him incommunicado for such a long period of time.

He was only allowed a visit from the Ukrainian consul after eight months, and then in the company of two guards who immediately stopped them if they tried to talk about anything but ‘neutral subjects’.  The same thing happened when his mother was allowed a visit after nine months.  He managed to tell her only that “they know how to persuade you”.

Vyhivsky is now 35 and has not seen his small son for four and a half years.