Ukraine imposes sanctions on pro-Russian MP Medvedchuk & his wife. What about criminal proceedings?Russia forced to ‘change the status’ of occupied Crimea because of sanctions Ukraine’s President Zelensky blocks three pro-Russian channels linked with MedvedchukRussia threatens criminal prosecution over calls to impose sanctions Not just Navalny. EU sanctions needed over 18-year sentences against Crimean political prisoners 2020: There was no worse year in the realm of human rights after the Revolution of DignityInvestigation of individual terrorist crimesA brief description of the KHPG strategic litigations in July–December 2020Accountability for Crimes Committed in Eastern Ukraine: Q&A on FIDH-KHPG’s Article 15 Communication to the ICCUkrainian hostages not forgotten but Russia understands only the language of ransoms and sanctionsA brief description of the KHPG strategic litigations in January – June 2020Russia’s brutal persecution of Historian of the Terror Yuri Dmitriev and of his daughterRussia uses Covid-19 to try to get sanctions lifted while continuing aggression unabatedA brief description of KHPG strategic litigations in July–December 2019Accountability for international crimes committed in Ukraine between 2014–2018Crimean Tatar political prisoner prefers imminent death from hunger strike to the slow torture Russia proposesCouncil of Europe’s PACE on the brink of electing sanctioned Russian Crimea land grab propagandist as Vice PresidentCouncil of Europe caves in to Russia, ignoring the Kremlin’s Ukrainian hostages, MH17 victims and human rights valuesRussia adds 4 politicians under EU sanctions to its first ‘delegation’ if Council of Europe gives in to blackmailCivil society warns Council of Europe that the time is not right to lift sanctions against Russia
• Topics / News from the CIS countries
• Topics / Human Rights Abuses in Russian-occupied Crimea 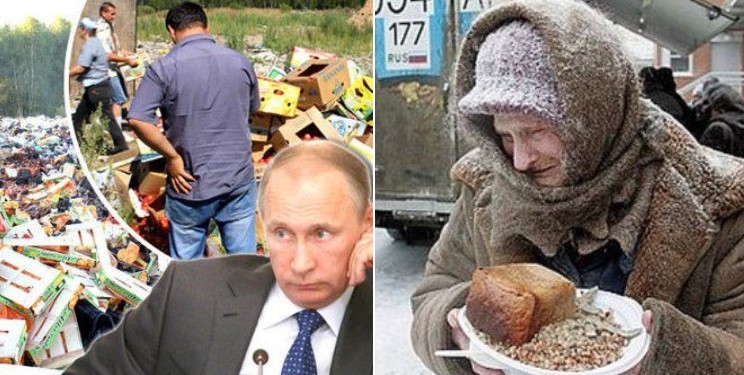 It is three and a half years since Russian President Vladimir Putin ordered the destruction of food products ‘smuggled’ into Russia despite Moscow’s ban on such imports in retaliation for western sanctions. Despite widespread outrage over the move when tens of millions are living below the poverty line, the barbaric destruction has continued unabated. .

In St. Petersburg, a city where almost a million people died of starvation during the Blockade in World War II, 929 tons of ‘banned products’ from the EU and Ukraine were destroyed during 2018.

Within the first three years following Putin’s decree, 46 tons of products were crushed or incinerated in occupied Crimea, most of the food being from mainland Ukraine.

The decree from August 2015, a year after the initial sanctions were imposed, elicited anger and disgust, with over half a million signing a petition to have it replaced by a law providing for the goods to be provided instead to the groups in society most at need.  Another petition got over 200 thousand signatures before being closed by its author in protest at the first petition.  The petition’s initiator called it “unacceptable to condemn the policies of our President”, and, pointing to the fact that the server was in the USA, said she was unwilling to “support American provocation”.

Even with the unfortunate fate of the second petition, such numbers were huge for Russia, with people unusually ready to express their opposition.  A Levada Centre public survey, for example, found that only about 15% of respondents approved of destroying food.

The authorities, however, continued bulldozing or incinerating huge loads of cheese, meet, fruit and vegetables.  All that changed was how it was presented by the state-controlled media.  The latter stopped showing footage of food being thrown into incinerators, bulldozed, etc, increasingly avoided mentioning Putin’s direct role in the measures, and also began focusing on fruit and vegetables, rather than the ham, other meat products and cheese that were being destroyed.  There were, and remain, attempts to explain away the destruction as being linked with safety requirements, since the produce, lacking labels, was allegedly of dubious origin.  That would in no way explain the crushing of tons of apples and other fruit and vegetables from Ukraine or Poland, nor why equally dubious produce from countries that have not imposed sanctions on Russia get through.

The percentage of people living under the poverty line in Russia and occupied Crimea rose to 14.2% in the second quarter of 2018, or 20.8 million people.  In fact, experts criticize the methods used by Russia’s Statistics Department to get those results and suggest that the real figure is one and a half to two times higher (around 35 million).

In 2015, the number considered poor increased by 2.1% (2.4 million).  The BBC Russian Service notes that this coincided with the Russian Statistics Department counting Crimea, invaded and annexed the previous year.  It surely, however, also coincides with the sanctions imposed by western countries on Russia, and the counter-measures that Russia imposed which hit ordinary Russian citizens.

Worth remembering also the very large number of children growing up in children’s homes, especially since Russia used children to retaliate against the USA’s Magnitsky Act by prohibiting Americans from adopting Russian orphans. It is unlikely that most of these children often see the sorts of fruit and vegetables being bulldozed.  The same is true of most people living in state-run institutions.  Virtually all elderly people who are dependent solely on their pensions will also be having immense difficulty making ends meet.

A 2017 study reported that 1% of Russians were the recipients of 29% of Russia’s GDP, and around 50 Russian billionaires from the Forbes List owned wealth equating to over a quarter of the country’s GDP.  While those in the West who probably know how many billions Putin owns are not telling, it is quite clear that he and his cronies possess vast amounts of property in the West, and multiple luxury items that are not subject to any sanctions.