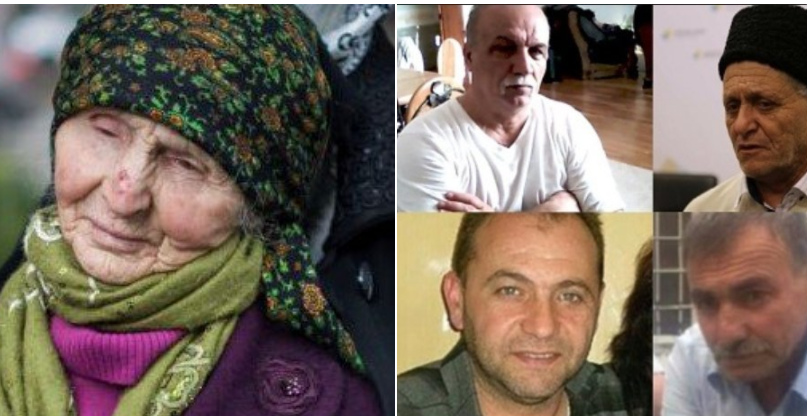 Russia began its most sordid persecution of Crimean Tatars by causing the death of Vedzhie Kashka, the 83-year-old revered veteran of the Crimean Tatar national movement.  It now appears intent on breaking its record, with the state of health of three other Crimean Tatar activists arrested on 23 November 2017 giving serious grounds for concern.

65-year-old Asan Chapukh was taken ill during the early hours of 7 January, and needed to be hospitalized.  Acute pain and, seemingly, internal haemorrhaging, was brought on by gastritis which his lawyer believes was caused by the medication he has needed in serious doses since being held in the torture-like conditions of the Simferopol SIZO, or remand prison, for 11 months.

Chapukh was finally released under house arrest in October 2018 with symptoms indicative of a stroke.  It took his hunger strike in protest at the failure to provide him with any medical care before the SIZO authorities even hospitalized him.

Chapukh had suffered a partial stroke soon after his arrest, which left one side of his body incapacitated and his speech impaired.  ‘Court’ after ‘court’ in occupied Crimea ignored his condition and kept him in detention until his blood pressure reached a level where death was very likely.

The situation is no better for 58-year-old Bekir Degermendzhy and here, Russian-controlled prosecutors and ‘judges’ are in clear breach of Russian legislation.  Degermendzhy has invalid status because of severe bronchial asthma, with this being a condition that should preclude any imprisonment.

In political cases, all regulations are forgotten and Degermendzhy has now been held in the SIZO for 14 months. During one ‘court hearing’, he needed an oxygen mask, yet the ‘judge’ still extended his detention for a further two months.

60-year-old Kazim Ametov’s health is also giving serious grounds for concern.  His lawyer, Emil Kurbedinov calls his continued imprisonment “slow murder” and believes his state to be critical.  He has never seen him so weak before and reports that Ametov too complains of breathlessness.

Ruslan Trubach is only 52 and, at least for the moment, in better condition.  The overcrowded, filthy and unsanitary conditions of the Simferopol SIZO are, nonetheless, tantamount to torture for anyone, and he is also not a young man.

The ‘criminal prosecution’ that led to the death of Vedzhie Kashka and is risking the lives of at least three of the four men arrested is of immense cynicism, and almost certainly aimed solely at trying to discredit the Mejlis or representative assembly of the Crimean Tatar people and respected members of the Crimean Tatar community.

On 23 November 2017,  Russia’s FSB, OMON and National Guard officers took part in an ‘operation’ against 83-year-old Vedzhie Kashka and four men who were trying to help her retrieve family savings ($7 thousand) that an unscrupulous man who had ingratiated himself with Kashka’s granddaughter was refusing to return.

It is unclear when Yusuf Aitan  (a Turkish citizen)  began collaborating with Russia’s FSB, and whether he himself initiated this as a means of getting to keep the Kashka family’s savings.  It could equally well have been the FSB who contacted him in order to concoct a prosecution, claiming that the 83-year-old and the four men had been trying to ‘extort’ money from Aitan.

There are Soviet fingerprints on many of the political prosecutions of Ukrainians in occupied Crimea, and this one is no exception.  In the later years of the Soviet Union, the regime increasingly fabricated ‘criminal’ charges to avoid the negative press they were getting for imprisoning dissidents.

This was undoubtedly what was intended in this case, which came several months after the UN’s International Court of Justice ordered Russia to revoke its extraordinary ban of the Mejlis, which is the self-governing body of the main indigenous people of Crimea.

Instead of complying, Russia has instead tried to discredit the Mejlis, including through the above arrests.  Incredibly, even after causing Vedzhie Kashka’s death through gratuitous violence, Russian and Kremlin-loyal Crimean media still came out  with lies about how “Weapons, drugs and extremist literature were found at the homes of the arrested Mejjlis men”  It was even claimed that machine guns were found, citing “a source in the enforcement agencies”.

Not only were the claims about weapons, etc. not true, but none of the men is, in fact, a member of the Crimean Tatar Mejlis.

Russia has also tried all forms of absurd excuses to block the independent investigation being carried out into the death of Vedzhie Kashka by lawyer Nikolai Polozov.  At the request of the Kashka family, he is persisting and has thus far come up with enough information to suggest that the 83-year-old died after being hit with the butt of a machine gun.  Polozov does not believe that the officers set out to kill the elderly veteran, but is convinced that her death was “the result of disproportionate use of force by those Russian enforcement officers who had carried out her unlawful detention”.

Russia may not be planning to kill any more victims of this squalid prosecution, but its behaviour is placing their lives in jeopardy.