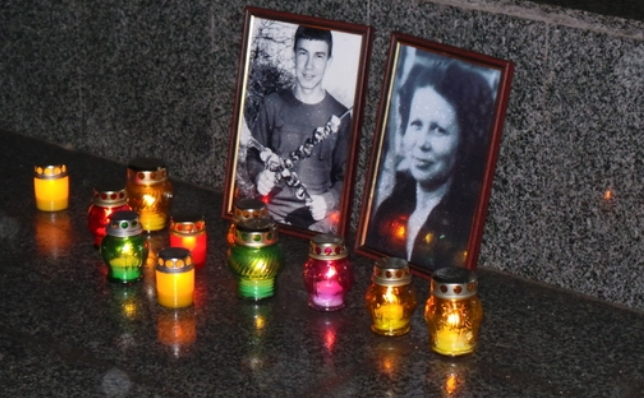 Almost five years after 72-year-old pensioner and Maidan activist Lyudmila Sheremet was gunned down outside the Security Service [SBU] building in Khmelnytsky on 19 February 2014, the suspected killer has been released from house arrest  after less than two weeks.  The court’s refusal to extend house arrest for Vitaliy Taradai, an SBU Alpha special force officer coincides with the extraordinary decision to take the investigation away from the Special Investigations Department just as real progress is being made.  All of this, and more, have fuelled anger and suspicion that Taradai, like his former boss Viktor Kraitor, are being shielded by the SBU.

Taradai had been placed under house arrest on 21 December 2018 and only until 8 January 2019.  The judge from the Podilsky District Court in Kyiv had rejected the prosecutor’s request for Taradai to be remanded in custody.

Even this house arrest was cancelled on 3 January 2019 in a hearing at the Kyiv Pechersky District Court.  It is telling that those recognized as having victim status in this case were not even informed about this new hearing, in direct breach of Ukraine’s Criminal Procedure Court.

The court cited evidence that Taradai had been working in the conflict area in the Luhansk oblast from 10 June to 20 December 2018 as justification for removing the house arrest.  The argument was that, although the Department for Special Investigations had summoned Taradai for questioning and then placed him on the wanted list when he did not appear, the SBU officer had not, in fact, been in hiding, but on a work-related trip.

Ihor Kalinin, prosecutor for the Special Investigations Department, earlier expressed deep scepticism, pointing out that Taradai had been summoned and not appeared, supposedly due to illness, before he was sent on this work trip to the Luhansk oblast. There was no good reason for the SBU to have spent a person facing serious criminal charges.

Kalinin also considers that the military prosecutors unwarrantedly removed the most serious charge against Taradai under Article 121 of the Criminal Code (causing grave bodily injuries).  He is now charged only with causing bodily injuries and manslaughter, and faces from 2 to 8 years’ imprisonment if convicted, instead of 10 years.

Equally suspicious is the fact that the military prosecutor first carried out investigative activities without involving the investigator from the Special Investigations Department and then handed the case to the State Bureau of Investigations. The latter has been assigned both the case involving Taradai and new proceedings against the former head of the SBU in Khmelnytsky, Viktor Kraitor.  Kalinin sees no grounds for this and says that they should continue the investigation to its conclusion.  Kalinin’s Department only learned of the decision by the group of military prosecutors from 28 December 2018 from the Single Register of Criminal Proceedings.

It should be stressed that it is the Special Investigations Department which has gained the trust and confidence of lawyers representing the families of Maidan victims and civic organizations linked with Maidan.

This is in marked contrast to the Military Prosecutor’s investigators who ‘lost’ the only undamaged bullet from the crime scene which made it possible to determine whose weapon was used in the shooting of unarmed protesters.

This was not the only indicator of sabotage since the logbook registering issue of weapons also proved to have ‘been lost’, with the claim being that it had been destroyed when the SBU building was set alight on the evening of February 19, 2014.  Since plenty of other material had been saved, this claim aroused considerable scepticism.

The same military prosecutors had also put forward a version according to which the shots which killed Sheremet and injured four other people had been fired by one of the Maidan activists who had managed to get into the  SBU building.

In fact, the video footage here https://youtube.com/watch?v=Nl5_cZtOg5M  makes it clear that the shots did not come from where the men who had managed to get inside and were trying to open the locked doors were standing.

It was only after the Special Investigations Department took on the case that progress was made and charges brought against Kraitor and Taradai, who had previously had witness status in the case.  It is difficult to understand what good rationale there could be for handing the investigation over to another body.

The Special Investigations Department appears to have concluded that Taradai opened fire using a machine gun, on Kraitor’s verbal instructions.  Yuri Butusov, Chief Editor of Censor.net, has examined the material and is convinced that, being in the foyer, Taradai could easily ascertain that none of the Maidan activists was armed. There were also no warning shot, just a rally of machine gun fire which killed Lyudmila Sheremet.

It was earlier reported that the shots had ricocheted on the granite balustrade before hitting activists.  This is probably the justification for calling the deaths manslaughter, however a trained spetsnaz officer and his SBU boss would have surely understood the potentially fatal consequences of shooting from a machine gun through a glass door when there was a huge crowd of people outside

Kraitor has now claimed that his actions on that fateful 19 February 2014 were lawful, although the following day he accepted full responsibility for the events, promising a proper investigation. Kraitor, who is believed to have issued the order to shoot, is now charged with exceeding his official powers (Article 365 § 2 of Ukraine’s Criminal Code); causing death through carelessness (Article 119 § 1) and causing grave injury through carelessness (Article 128).

Two people were killed in Khmelnytsky. Lyudmila Sheremet was a retired anaesthetist and a civic activist.  She was married, with a daughter and grandson.

Dmytro Pahor was just 21.  He had tried to reassure his mother that morning, saying that he was tired after work and just needed to sleep. He was shot dead with a Makarov pistol while outside the SBU building at around 20.00 that even.  Even here there are attempts to distort the story, with the claim that he was shot while climbing the fence rejected by the young woman who was standing near him and who first tried to help him as he collapsed.

Four other people were shot and injured in the same gunfire that killed Sheremet.  One young man had his leg amputated.