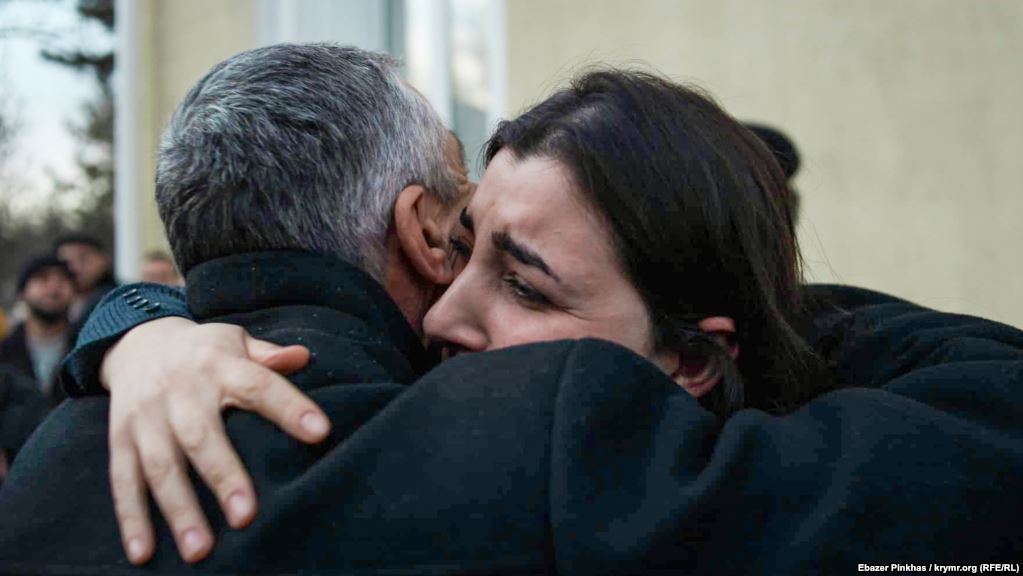 There were tears of joy and relief in Simferopol when a Russian-controlled ‘court’ unexpectedly ordered that three Crimean Tatar political prisoners, imprisoned for well over a year, be released under house arrest.  The three men: 60-year-old Kazim Ametov; Bekir Degermendzhy (58) and Ruslan Trubach (52); together with 65-year-old Asan Chapukh, released on the same conditions back in October, are still facing ‘trial’ on concocted charges.  There is, however, now hope that Russia will not raise its death toll in a criminal prosecution that began with the fatally violent attempt to arrest 83-year-old Vedzhie Kashka, the world-renowned veteran of the Crimean Tatar movement.

Nikolai Polozov, the lawyer carrying out an independent investigation into Vedzhie Kashka’s death within minutes of that attempted arrest, welcomed the news on 24 January and praised the lawyers, civic activists and the families of the men for their efforts. Bitter questions must, however, remain as none of the men should even have been imprisoned in the first place, and this is not only because of the absurd charges.  Degermendzhy suffers from severe asthma, a condition which, even by Russian law, should have precluded his detention.  The same applies to Chapukh, who suffered a stroke shortly after his arrest, yet remained in the Simferopol SIZO [remand prison] where the conditions are tantamount to torture even for men in good health.

This is unquestionably a political prosecution and there are no grounds for suspecting any of the parties involved in it of sudden demonstrations of humanity.  It was evident back in December 2017, less than a month after the men’s arrest, that the detention of two of the men (at least) was placing their lives in jeopardy.  Chapukh had lost control of one side of his body, was unable to speak and was totally dependent on cellmates.  Degermendzhy’s asthma became so acute that he needed to be admitted to an emergency ward.  He was held there under guard, and his wife was prevented from seeing him.  He was moved, as soon as his condition stabilized, supposedly to a normal ward, though in fact to the corridor outside the ward, and then back to the SIZO.

During at least one of the ‘detention hearings’, Degermendzhy needed to sit with an oxygen mask on, yet the ‘judge’ still remanded him in custody for a further two months.

Ametov is now 60, and his health has also been gravely undermined by the 13 months spent in SIZO.  His lawyer, Emil Kurbedinov recently called his continued imprisonment “slow murder” and warned that he had never seen him so weak.

One of the motives in persecuting Bekir Degermendzhy may have been that, as the father of Mustafa Degermendzhy, imprisoned in one of Russia’s most extraordinarily lawless political prosecutions, he had travelled to Strasbourg to tell people about the political persecution in his homeland.

The main motive, however, became evident back on 23 November 2017, from the coverage of the arrests in Crimea on Russian propaganda channels.  They claimed that the FSB and police had detained “members of the Crimean Tatar Mejlis” (with the words about the Mejlis in inverted commas, and with a footnote stating that the Mejlis (wrongly referred to as an ‘organization’) is banned in Russia. There were lies about how “Weapons, drugs and extremist literature were found at the homes of the arrested Mejjlis men” and claims that machine guns were found, citing “a source in the enforcement agencies”.

All of this was just months after the UN’s International Court of Justice ordered Russia to revoke its extraordinary ban of the Mejlis, the self-governing body of the main indigenous people of Crimea.

Russia has flouted this order and instead used various measures including the arrests in the ‘Vedzhie Kashka case’ to try to discredit the Mejlis.

As reported, Russia’s FSB, flanked by armed Rosgvardia [Russian National Guard] fighters and men from Russia’s so-called ‘centre for countering extremism’ mounted a ‘special operation’ on 23 November 2017 against a woman in her 80s and four other respected members of the Crimean Tatar community.

Even without any evidence of physical force, it would have been clear to the FSB that such an arrest of an elderly lady could have tragic consequences.  In fact, while Polozov does not believe that the officers set out to kill Vedzhie Kashka, he is convinced that her death was as “the result of disproportionate use of force by those Russian enforcement officers who had carried out her unlawful detention”.

The 83-year-old had been trying to retrieve the family’s savings (seven thousand USD) which had been ‘borrowed’ by a Turkish national, Yusuf Aitan, who had become friendly with her granddaughter and who had consistently failed to return the money.  Kashka had asked the men, whom she trusted, to act on her behalf convincing Aitan to return what he had borrowed.

The FSB decided to claim that the efforts to get the Kashka money which Aitan had taken and not returned was an attempt at ‘extortion’.  Undaunted by the fact that Aitan had signed a piece of paper acknowledging receipt of the Kashka family’s money, they claimed that this had been given ‘under pressure’ and that he had been ‘threatened’.

Lack of any semblance of credibility is not an impediment in Russian-controlled Crimean ‘courts’, but Russia has doubtless understood that the case will be exposed in all its squalor.  Having caused the death of one highly-respected Crimean Tatar veteran, it has now, thankfully, reduced the likelihood of other deaths.