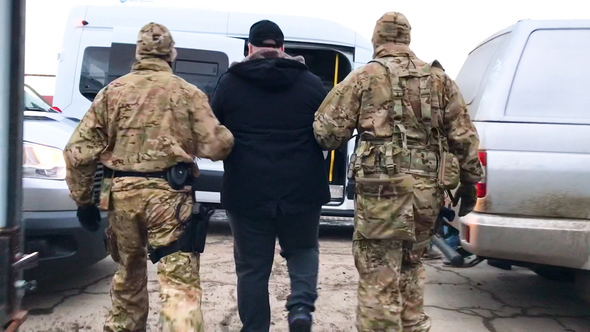 A 24-year-old Crimean Tatar has been sentenced by a ‘court’ in occupied Crimea to 10.5 years’ imprisonment for supposed involvement in mainland Ukraine in the Asker (or Noman Çelebicihan) Battalion.  Very little is known of this latest victim of Russia’s mounting attempts to demonize a volunteer battalion which is legal in Ukraine and not engaged in any combat.  It is, however, telling that the Russian-controlled reports of this sentence, passed on 23 January, used identical video footage to that shown in reporting another alleged arrest of a ‘battalion member’ on that very same day.  Given that the Russian FSB are particularly fond of extracting videoed ‘confessions’ for Russian television, it seems highly suspicious that neither of these two men’s faces have been shown, and the video shots from behind look like they are of a person who is considerably older than 24.

The original reports on 20 March 2018 said only that a 24-year-old had been arrested, however the person sentenced on 23 January has been named as Fevzi Sahandzhy.

The prosecution claimed that, in January 2016, the Crimean had joined the battalion which is, inaccurately described as Crimean Tatar.

Russia, as occupying state, is in breach of international law in its continuing prosecution of Crimeans under Russian legislation.  In this case, a Sevastopol ‘court’ under Russian control has passed a huge sentence on a Ukrainian for alleged involvement in a perfectly legal Ukrainian structure on Ukrainian territory.  Nor is the problem only that Russia has no right to declare the Asker Battalion ‘illegal’.  It has done so, claiming that it is an ‘illegal armed formation’, which is also inaccurate.

As reported, the Asker Battalion was formed soon after the beginning of the Crimean Blockade in 2015, initiated by exiled Crimean Tatar leaders Mustafa Dzhemilev and Refat Chubarov with specific human rights demands. It remains a relatively small formation whose role at present is merely to back the Ukrainian border guards in areas near the administrative border with occupied Crimea. The battalion’s leader, Lenur Islyamov, has long indicated that this is a Crimean formation, not only Crimean Tatar. While he would like to see the Battalion given status within the Armed Forces, this has not happened, nor has there been any participation of the Battalion as a whole in the conflict in Donbas.

While it is certainly true that its members, like most Ukrainians, wish to see the Russian occupiers out of Crimea, there is nothing to substantiate Russia’s ongoing attempts to convince the population that members of the Battalion are planning / carrying out acts of terrorism or violence.

There have been two reported arrests, on March 2018 and on 23 January 2019 of supposed members of the Battalion, but with nothing known about the men arrested, and assiduous attempts to avoid showing them, which is not in the FSB’s style.

The only Crimean Tatar whose identity is fully established is Edem Bekirov, a 57-year-old amputee with diabetes and a very serious heart condition.  The reports linking him with the Battalion came a week after Bekirov was seized by FSB border guards as he tried to enter Crimea to visit his elderly mother.  Even the Russian media reports that showed Bekirov having difficulty walking with a crutch still posted headlines claiming that he was a member of a military formation who’d been seized with 11 kilograms of explosives.

None of the reports on 19 and 20 December 2018 named the 57-year-old, nor did they explain why an arrest on 12 December had taken so long to be reported. It was, however, claimed that the detained man was “a member of the nationalist militarized formation ‘the Noman Çelebicihan Battalion’.  In the actual reports, most gave details that contradicted the misleading titles and made it clear that Bekirov had not been caught with explosives.  The gravely ill 57-year-old who suffered a life-threatening heart attack last year was merely alleged to have managed to carry “12 kilograms of DNT, 200 bullets and firearms” and place them in a secret hiding place in occupied Crimea.  Russia is continuing to hold Edem Bekirov prisoner, despite international demands for his release and the immediate danger to his life that this poses.