Turncoats and torture deployed against Ukrainian Muslims in Russian-occupied Crimea 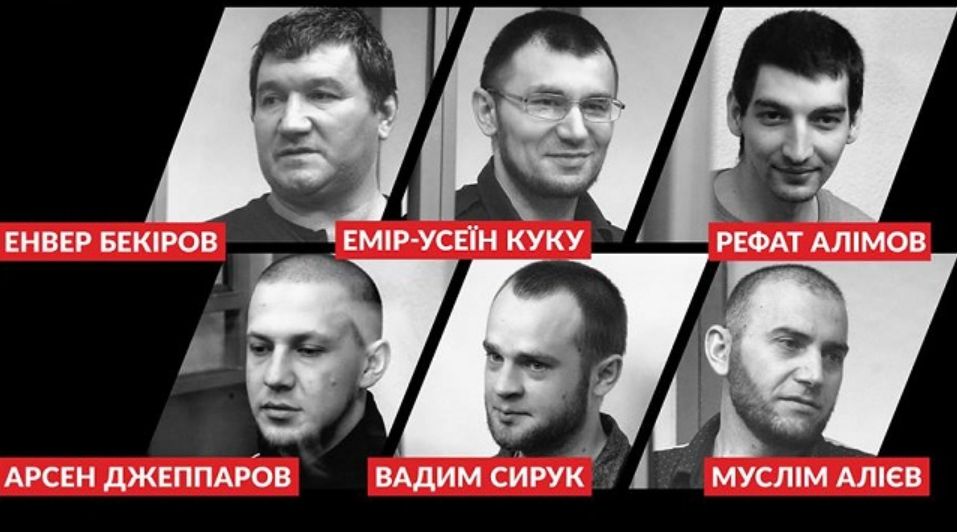 It is no accident that Russia’s censor has begun a new campaign to stifle information about human rights violations in occupied Crimea by trying to force YouTube to delete a video about imprisoned human rights activist Emir-Usein Kuku.  There is a lot that the FSB, and especially Alexander Kompaneitsev, a notorious Ukrainian turncoat, should want to hide.  That includes considerable evidence that Kompaneitsev has used threats of prosecution and / or torture to try to concoct a prosecution that will end with six law-abiding Ukrainians sentenced to 10 – 20 years’ imprisonment for their faith.

Seidal Aliev was just seven years old when masked men with machine guns burst into his home and forced his father to the ground.  The men claimed to be searching for drugs and weapons, but took away only religious books, children’s colouring-in books and technology.  They also took away Seidal’s father, Muslim Aliev, one of the four men arrested on 11 February and accused of involvement in Hizb ut-Tahrir, a perfectly peaceful pan-Islamist movement which is legal in Ukraine.  Aliev; Kuku; Enver Bekirov; and Vadim Siruk have been imprisoned ever since, together with two very young men Refat Alimov and Arsen Dzhepparov arrested on 18 April that year on the same charges.

This was the second ‘round’ of arrests in occupied Crimea on Hizb ut-Tahrir charges, however the four Crimean Tatars arrested in Sevastopol in early 2015 had received shamefully little attention from international human rights NGOs.  Kuku had already faced an abduction attempt that turned into an FSB ‘search’ only after his cries for help were heeded, as well as other forms of persecution quite unrelated to Hizb ut-Tahrir.  Since this all left no space for doubt that he was being persecuted for his human rights activities, Amnesty International declared him a prisoner of conscience and other international NGOs have also spoken out in his defence.

In fact, all six men should be recognized as prisoners of conscience, and not only because they are essentially imprisoned for their religious and political views.  Kompaneitsev, a former Ukrainian Security Service officer who betrayed his oath and joined Russia’s FSB, had not only hounded Kuku.  Zarina Dzhepparova has recounted how Kompaneitsev, together with two other FSB men, directly threatened her husband, saying that if he didn’t give the testimony they demanded against the four men arrested on 11 February, he would also be arrested.   He was only 25 then, yet neither she nor her husband saw any way out.  “There was no question of agreeing to their offer.  He told me: “They also have children, families.  How would I later explain what conscience and honour are to my daughter if I did something like that?”

Kompaneitsev had also threatened Bekirov in the SIZO [remand prison], saying that if he didn’t ‘cooperate’, his nephew, Alimov, would be arrested.

None of the men has ever agreed to any deal with the ‘investigators’, which is probably the reason that Kompaneitsev and possibly other new ‘colleagues’ tried to terrorize and put pressure on Kuku’s 9-year-old son (and, almost certainly, other children).

These methods were seen from the outset.  On 11 February, 12 men were initially detained, and though eight men were released, this was at a great price.

Dimar Minadirov, for example, recounted his experiences a few days later, almost certainly after he had left Crimea.  He too had been awoken by men in full combat gear hammering on his door, who carried out a search and then took him away for interrogation.  They wanted him to give testimony about the four men arrested, and at one point used torture methods and threats against him.

Fortunately he also gave an interview to journalist Taras Ibragimov, in which he revealed more details about his encounter with Kompaneitsev, as well as one fact which later proved to be of crucial importance.

Kompaneitsev had beaten him and placed a plastic bag over his head, threatening him with asphyxiation.  He said that they would make him a secret witness, and told him to “think about your family, after all, you have children.  And if you don’t agree, we’ll lose you, you’ll go to the pit for a couple of days”.  Kompaneitsev also boasted of the abduction and beating up of Kuku.  He had got that for his activities, Kompaneitsev said, and now would go to prison.  Did Minadirov want to “talk”?  All of this was while he was squeezing the plastic bag preventing Minadirov from getting any air.

Minadirov refused to ‘cooperate’ and was, eventually released.  He is now living in Kyiv.

It was a chance remark in this account that Ibragimov fortunately recalled later.  While in the FSB office, Minadirov says that another man was brought in, who told him that his name was Shamil, and that he was from Krasnokamenka.

Russia’s ‘Hizb ut-Tahrir trials’ are based on illicit records which, according to assessments from highly suspect and unqualified ‘experts’, are supposed to ‘prove’ involvement in Hizb ut-Tahrir and ‘secret witnesses’.

One such ‘secret witness’ proved to be this person called Shamil.  In fact, judging by the account given by lawyer Edem Semedlyaev, Kompaneitsev got it wrong here as well.  During the ‘trial’, Shamil was announced as a secret witness (in which case he would not be seen, and would not be identified).  Semedlyaev objected.  In fact, such objections are normally ignored, however Shamil himself stated that he was prepared to give testimony openly.  He also found the courage to state that he had been forced under pressure to ‘collaborate with the FSB and testify against the men.

Although Shamil did not specify what he meant by “pressure”, the testimony given by Minadirov, Rinat Paralamov  and others who had been seized by the FSB and tortured, suggests that the same methods were used against him.

According to the testimony Shamil had allegedly given earlier, he said that he knew Bekirov to be a member of Hizb ut-Tahrir.  In court, according to Semedlyaev, he said only that he had worked in the same school as Bekirov, that he knew Alimov and Dzhepparov and that many people in their village turned to Bekirov as he was known to be very well-versed in Islam.

It was after this, and some other disasters with supposed ‘witnesses’  that the then head of the FSB in Crimea, Viktor Palagin lodged an application with the court asking for a note which was claimed to be from Aliev to Bekirov to be added to the file.  This note supposedly asked Bekirov to “influence three prosecution witnesses”.

As the defence pointed out, the FSB had handed this case over and had absolutely no right to add anything.  Russia’s FSB, however, is powerful, and the judge agreed to what was clear revenge for the exposure of their ‘secret witness’ and, most importantly, the methods used to obtain such ‘testimony’.

Ibragimov suggests that the fiasco with such witnesses may have been the real reason for the extraordinarily lawless decision by the court to send the case back to the prosecutor for increasing the charges against Bekirov (details here Ominous new twist in Russia’s conveyor belt trial of six Ukrainian political prisoners ).

In this case, probably because of the debacle over ‘witnesses’, both Muslim Aliev and Enver Bekirov are  facing the more serious charge of ‘organizer’, under Article 205.5 § 1 of Russia’s criminal code, with this carrying a sentence of up to life imprisonment.  The other men are charged with ‘involvement’ under Article 205.5 § 2 with the sentence up to 20 years’ imprisonment.