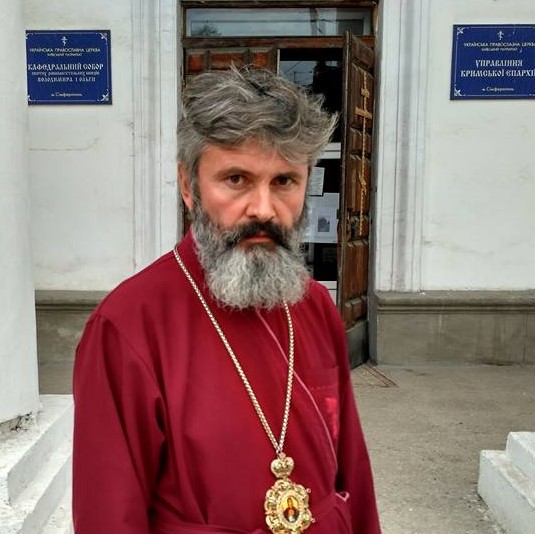 The Orthodox Church of Ukraine has been ordered to vacate the Cathedral of Vladimir and Olga in occupied Simferopol by the beginning of March, with this likely to lead to eight parishes in rural areas also being forced to close.  Archbishop Kliment of Simferopol and Crimea has appealed to the international community to prevent the effective destruction of the Orthodox Church of Ukraine [OCU] which has long been under attack in Crimea.  He has also, however, suggested that if there was a choice between the Church being able to continue and a fully principled stand refusing to register under Russian legislation, he chooses the Church.

Kliment reported on 8 February that he had received a writ ordering that he leave the Cathedral which was now under the so-called ministry of property and land relations. The occupation authorities were thus terminating the agreement between the Church and the Crimean Property Fund in 2002, and the Church was given 30 days to vacate the building.

Perhaps coincidentally, on 5 February Kliment was appointed the head of the Orthodox Church of Ukraine’s Mission to help victims of rights abuses and illegal imprisonment in Russia and occupied territories.

During a press conference in Kyiv on 12 February, Kliment called on the international community, on the ambassadors of European countries, the USA and Canada in Ukraine to take the situation under their personal control. If pressure on the Church intensifies, he said, personal sanctions were crucial against those involved in terminating the Church’s lease agreement.

The following day, Anna Anyukhina from the occupation ‘government’ claimed that they had offered to ‘legalize relations’, that the Church had not re-registered as a legal entity, under Russian legislation, and that they therefore did not have such a possibility.

The Church has, indeed, refused to re-register under Russian legislation, which would require adding words to its association papers  claiming that Crimea is part of Russia.  Lack of such registration has meant that the Church is not considered to be a legal entity at all.

As mentioned, Kliment addressed this question in an interview to Krym.Realii on 13 February, saying the following:

This is not the first time that the Archbishop has expressed bitterness that the Ukrainian government is not doing enough to support his Church under siege in occupied Crimea.

It is, in fact, not guaranteed that the occupation regime would not have used other methods to hound out the Church and Kliment has said that he was offered a large amount of money very early on if he vacated the Cathedral.

It was Kliment and the Church that first came under attack following annexation, almost certainly because of its openly pro-Ukrainian position and its public statement on 11 March 2014 condemning Russian occupation of Crimea.  It was this opposition that led to its refusal to enter into any agreement with the Russian Defence Ministry (over church premises in Sevastopol ‘handed over’ to that ministry or to re-register under Russian legislation.  There has, however, been an attack on all things Ukrainian since Russia’s invasion, and the Church has provided a vital focal point for people wanting to hear Ukrainian and be with Ukrainians.  That alone, as well as Kliment’s impassioned appeals to the international community in defence of Ukrainian political prisoners, were surely behind the attempts to deprive the Church and believers of their places of worship and of other rights. Other methods included  the threat of physical reprisals by the armed paramilitaries, especially in 2014, vulnerability over the  lack of Russian citizenship and also economic intimidation.  There have been threats, for example, against those businesspeople who provided premises for the Church to use, with this a reason why many religious communities have lost their places of worship.

At a press conference in October 2018, Kliment reported that only five priests now remained against 25 in 2014.  Five had left recently for mainland Ukraine after a number of searches of the homes of members of the Ukrainian Cultural Centre and after it became clear that the lack of a Russian passport was likely to be used against them.  The remaining clergy try as far as is possible to continue services, sometimes helped by priests who come for one or two days from mainland Ukraine.

While the Cathedral is not the only remaining church in Crimea, it is the main cathedral and eparchial centre of the Church. It is also the only Ukrainian Orthodox place of worship in Simferopol and for many believers, it would simply not be possible to travel to other parts of the peninsula for services.

The new moves to drive the Church out of Crimea are probably also retaliation for the creation of the Orthodox Church of Ukraine with autocephaly or independent status.  The developments were met with rage by both the Kremlin and the Moscow Patriarchate and Archbishop Kliment had anticipated measures against the Church in Crimea as revenge.  He had earlier spoken of how Sergei Aksyonov, the Russian-installed ‘leader’ of Crimea that the occupation regime’s restraint was due to a request from Metropolitan Lazar, head of the Russian Orthodox Church in Crimea who was worried that persecution of the Ukrainian Church in Crimea could lead to a backlash against churches of the Moscow Patriarchate in mainland Ukraine.  After Ukraine receives the Tomos of autocephaly on January 6, 2019, there is nothing and nobody, Kliment said, save God, who can restrain the Russian authorities in occupied Crimea.

Tragically, he was right.