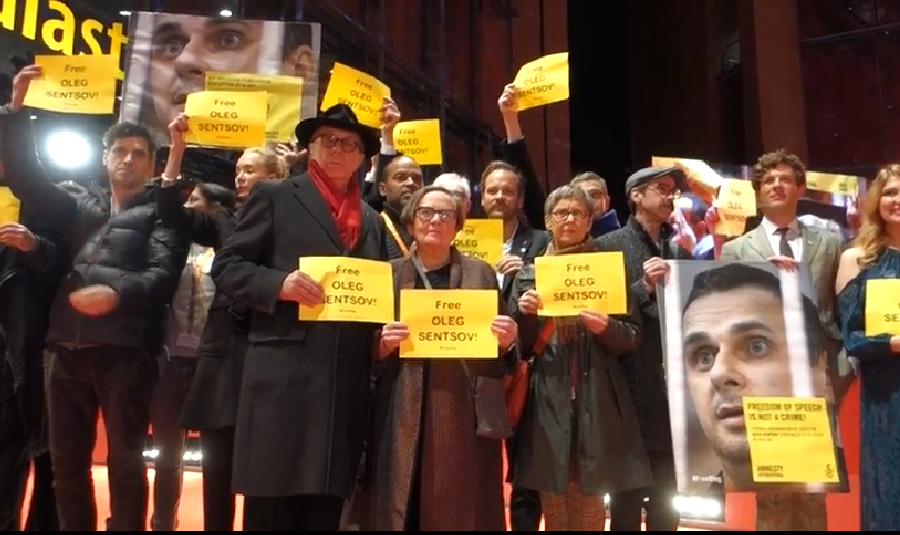 Viktor Kotov, a deputy from the Basmanny District Council in Moscow and a member of ‘Open Russia’ is facing a ‘pre-criminal investigation’ over an article he wrote in defence of Oleg Sentsov, the Ukrainian filmmaker and opponent of Russia’s annexation of Crimea, whom Russia has been holding prisoner for almost five years.  Since the internationally condemned charges concocted against Sentsov and three other Ukrainians were of ‘terrorism’, Kotov could face criminal prosecution for supposed ‘justification of terrorism’.

Kotov’s article was published in August 2018, amid mounting concern for Sentsov who had been on hunger strike since May that year and an international campaign for his release and that of all Russia’s Ukrainian political prisoners.  There is no justification of terrorism in his article, however this is not surprising given that there was nothing even remotely resembling ‘terrorism’ in the indictment used to stage the trial of Sentsov and civic activist Oleksandr Kolchenko.  This was the reason that the Memorial Human Rights Centre declared both men political prisoners, why the European Parliament recently awarded Sentsov the 2018 Sakharov Prize for Freedom of Thought, and why all democratic countries have demanded both men’s release.

A complaint against Kotov’s article was lodged with Russia’s Investigative Committee by Dmitry Zakharov who has become notorious over the years under Russian President Vladimir Putin for his Soviet-style ‘denunciations’.  It was Zakharov, for example, who led to Natalya Sharina, Director of the Ukrainian Literature Library in Moscow being arrested and prosecuted on ‘extremism’ charges over material, including children’s magazines, in the library (details here).  This was only one of Zakharov’s multiple ‘denunciations’ before, in September 2018, he turned his attention to Kotov’s article about Sentsov.

Zakharov confirmed to Novaya Gazeta that he had contacted the Investigative Committee.  Presumably referring to people in general who write in defence of Sentsov, he claimed that “they are speaking out against the state , after all, according to our laws, terrorism is bad. People who try to justify terrorism should bear liability, and it is likely that problems will start both for deputy Kotov and for the people publishing the newspaper.  It is unacceptable for such articles to appear in officially registered media”.

A human rights Telegram page reported on 13 February that Kotov has been summoned for questioning to the Investigative Committee. He was informed over the phone that he is being checked for ‘offences’ under Article 205.2 of Russia’s criminal code (‘Public calls to carry out terrorist activities; public justification of terrorism or propaganda of terrorism’).  The text is being sent for a linguistic assessment which should be ready at the end of the month.

Since the article was published in the media, this would likely fall under paragraph 2 and could carry a sentence of up to five years’ imprisonment.

It is possible that even the Russian linguistic ‘experts’ used for such assessments may balk at this task, however one of the aims has already been achieved. Given that there was no need to inform Kotov or question him until the assessment had been carried out, the idea was almost certainly to warn him and others, as had vigilante-denouncer Zakharov, of the problems they could face for defending political prisoners.  The same is true of the arrest a few days ago on identical charges of journalist Svetlana Prokopyeva over a remark in no way ‘justifying terrorism’

It may well be no accident that the news of Kotov’s ‘pre-criminal investigation’ is coinciding with attempts by Russia’s censor – Roskomnadzor – to get material about another Ukrainian political prisoner – the Crimean Tatar human rights activist Emir-Usein Kuku deleted from Ukrainian media pages (the Centre for Journalist Investigations, Krym.Realii, and probably others) on YouTube.  While the actions by Russia’s highly political Investigative Committee are unfortunately to be expected, it is extremely disturbing that YouTube is going along with measures aimed at silencing  voices of protest about repression in illegally occupied Crimea.

Sentsov has been incarcerated since May 10, 2014, although the charges against him were not proven, and did not, in any case, constitute ‘terrorism’.

There are very strong grounds for believing the allegations of three of the men that they were subjected to torture, and Russia has also failed to carry out a proper examination.

He and the other men were prevented from seeing lawyers during the first weeks, and there are multiple other violations of their right to a fair trial.

He and Kolchenko are both held vast distances from their family and homes, despite an unequivocal ECHR judgement on this very issue.  Both men are being deprived of their rights under Ukrainian and international law because Russia insists that the men ‘automatically’ received Russian citizenship.

There is no international body or democratic country that has not publicly condemned the men’s politically-motivated persecution.

Emir-Usein Kuku and five other Crimean Muslims are facing huge sentences on equally unjustified ‘terrorism’ charges based solely on unproven charges of ‘involvement’ in the peaceful Hizb ut-Tahrir movement which has never committed any acts of terrorism and which is legal in Ukraine.