• Topics / Against torture and ill-treatment

The research was conducted by the Kharkiv Institute for Social Researches under a joint project with the Kharkiv Human Rights Protection Group “Fight against torture, ill-treatment and impunity in Ukraine” with the support of the European Union.

The research was aimed at solving the following problems:

• to research and provide the community and the administration of the National Police of Ukraine with a clear idea on how the population sees the police, what is the level of trust in it;

• to research, what are the main indicators of the success of the police in the country and its regions;

• to propose the changes to the existing system of assessment of the crime leveland police activity, to make it more objective.

In order to perform those tasks a sociological survey of 19 500 respondents was conducted in Kyiv, all regions of Ukraine, districts of Kharkiv and Lviv oblasts during November-December 2018, according to a specially designed sample. The research was carried out by method of face-to-face interviews.

Key results of the research

2. 50 % of the respondents believe that the crime level in the place of their residence has not changed in the last 12 months. More than a quarter of respondents (26 %) pointed out that in their opinion the crime level has increased. Only 11,1% said that they noticedthe decrease of crime level during the year. 13 % haddifficultyansweringthatquestion. It should be noted that the residents of Dnipropetrovsk and Kirovohrad oblasts and Kyiv city estimate the crime level as the worst. Most respondents who noticed the improvement of the situation live inIvano-Frankivsk and Khmelnitsky oblasts (see Table2-1).

3. Assessing the district of their residence, respondents expressed opinion about crimes that are common there. The most widespread, with a significant margin, are violations of traffic rules (67,2 %). Burglaries are also common, in the people’s views (49,8 %), as well as hooliganism of aggressive companies (40,6 %) and illegal alcohol and drug trafficking (46,8 %), which is an essential basis for creating a dangerous environment and criminal activity. The violence, attacks and robberies in the streets worry less than a third part of the respondents (25,5 %), and fraud – over a third part (36,1 %). Theprevalenceofviolationsoftrafficrulesis most often noted by the residents of Dnipropetrovsk, Zakarpattia, Rivne, Cherkasy oblasts. Thefts worry most of the residents of Kyiv cityand Dnipropetrovsk oblast (see Table 3-1).

5. Most of respondents (75,7 %) did not have any contacts with the police during the year. Among the most widespread causes of contact respondents indicated the following: situations when their family members or acquaintances became the victims of crimes (5,4 %), the contacts when it was necessary to arrange the documents (4,6%), the situations when the police stopped them in the street to check their documents (4,1 %). (seeTable1-1).

10–13. In general, 4,6 % of respondents (878 of respondents in relevant selection) pointed out that during the year the police officers violated their rights or the rights of their relatives, or did not perform their duties well. It should also be pointed out, that 1,7 % of respondents (326 respondents in the relevant selection) noted that they became the victims of beatings by the police officers, were subjected to suffering or ill-treatment. At the same time 90,7 % of persons whose rights or whose relatives’ rights were violated or who pointed out that the police did not perform their duties in good faith, never filed formal complaints. The main cause is the belief that it would be in vain (51,4 %).

14–15. 30,4 % of respondents trust the police (2,7 % among them fully trust it, and 27,7 % rather trust it than not). 50 % of respondents said that they did not trust the police:29,6 % of them said that they probably do not trust, and 20,4 % do not trust at all. Thus, the police generally has a negative balance of confidence (-19,6 %). At the same time in two oblasts where the police enjoys more trust, the balance of confidence is positive – in Zakarpattia and Khmelnitsky oblasts (see Table15-1).

16. Itshouldbenotedthat36,3 %of the respondents pointed outtheir willingness to help the policein any circumstances. 27,8% are willing to help given that such help would not damage the interests of the respondentsor their relatives. Most of persons willing to help reside in Vinnytsia, Zhytomyr, Zakarpattia, Rivne, Sumy and Ternopil oblasts. 8,7 % pointed out that they would not help the police in any circumstances, most of such respondents reside in Ivano-Frankivsk oblast (see Table 16-1).

17. The respondents indicated the following among the biggest draw backs in the work of the police: incompetence (39,3 %), corruption (36,8 %), reluctance to protect “a regular person” (30,9 %). 26,4 % of respondents also indicated a weak connection with the population, and 20,6 % —the impunity of police officers.

20. 10,2 % among respondents said that during the last year they became victims of a crime. The respondents most often became the victims of hooliganism, various forms of theft, fraud. The most victims are in Volyn, Luhansk, Lviv oblasts (see Table 20-1).

24–26. During research it was revealed that a significant number of victims (40,2 %) never notified the police about the crimes that they became the victims of. Most of respondents who never reported police that they became victims of crimes reside in Volyn, Ivano-Frankivsk, Luhansk, Lviv, Khmelnitsky and Chernivtsi oblasts. The residents of Kirovohrad region contacted the police for help most often (see Table 24-1). Among the causes of reluctance to report police is the disappointment in the effectiveness of the police (34,9 %), the opinion that the police is not interested in such incidents (38,8 %) or the attempts of the residents to deal with the situation on their own (28,8%). Reports of crimes usually took place because people hoped for the return of their property or redress (56,6 %) or hoped that the perpetrators would be punished (50,8 %). Some of respondents (27,5 %) contacted the police because believed that it was right and believed it was their duty.

27. The main mean of notifying about a crimeis by phone. 102 number was used by 58,3 % respondents, 5,5 % called the local police department. 27,7 % more arrived to the police and wrote the applications.

29–32. Only 14,8 % of respondents said that they were fully informedabout the investigation. 18,6 % said that they were informed “more or less”. Some (17,1 %) said that they were not informed enough, and 29,3 % were not informed at all. As a result, 77,2 % of the victims of crimes said that they would like to be better informed about the course of investigation. Among the information they would like to receive the most, they most often indicated the information about the course of investigationand its result (47,3 %). The research revealed that 35,6 % of the victims of crimes did not receive any additional information from the police. Information about whether the perpetrator was found or what to do if the case is brought to the court, was received by 15,1 % of the respondents, 26 % were assisted while drafting the applications and during the subsequent communication with the police officers. 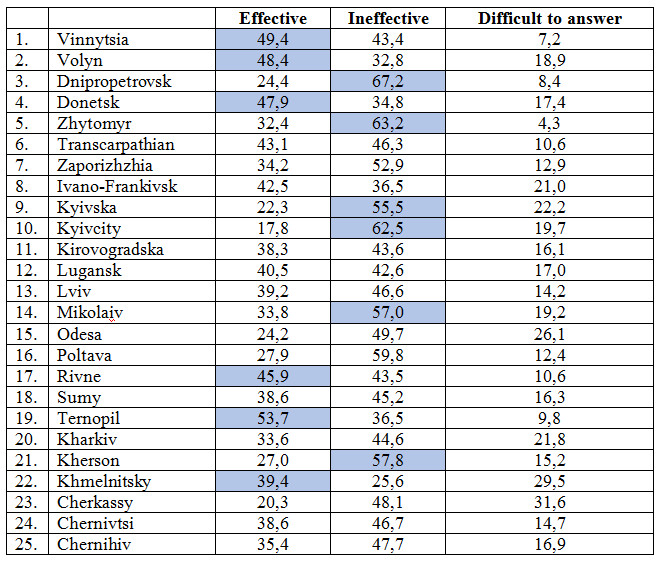 15. BALANCE OF TRUST (RELATIONSHIP BETWEEN THE RESPONDENTS WHO TRUST, AND THOSE WHICH DO NOT TRUST) TO STATE AND CIVIL INSTITUTES (in %)