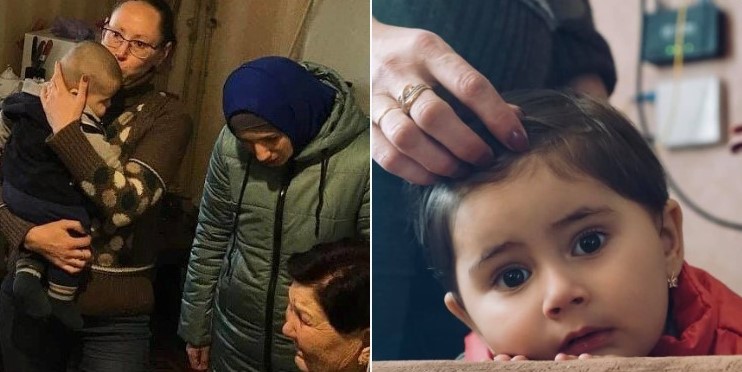 After the latest armed searches and arrests in Russian-occupied Crimea, three more Crimean Tatars have joined Russia’s long list of Ukrainian political prisoners and five children have been left without their fathers, bringing the number of Russia’s smallest Crimean victims to well over 100. .  The three men, the youngest of whom is just 21, are the latest victims of Russia’s most cynical conveyor belt prosecutions which it is conducting, in grave breach of international law, on illegally occupied Ukrainian territory.

There was one ominous difference in the events on 14 February 2019 from previous FSB ‘operations’.  The armed and masked men had not only synchronized their arrival at the three homes in Oktyabrske.  They also demonstrated the purely formal nature of such ‘searches’ by finishing them all at the same time.  At the home of Rustem Emiruseinov, there was a rather suspicious exchange after all rooms had been searched in which the ‘investigator’ asked an FSB officer if he “had found what he was looking for” to which the officer shook his head.

Emiruseinov’s wife Aliye notes that the officers took several books on religious subjects including one that they had clearly planted.  “We have a linen cupboard on the first floor and while the investigator was distracting my father-in-law, one of the officers pulled a book from the cupboard. We said that this was not ours, that we were seeing it for the first time.  They still added it to the protocol although the witness whom they had brought with them confirmed that he had not seen the book during the search”.

The couple’s two daughters were old enough to be aware of this armed intrusion and could not be calmed for many hours.  The men carrying out the search took computer technology, telephones and also 11-year-old Ayshe’s tablet which they simply grabbed from her schoolbag.

Emiruseinov has attended ‘court hearings’ in the cases of political prisoners and also took part in the online flash-mob entitled ‘Muslims are not terrorists’.  This followed the series of single-person pickets in October 2017, after 76-year-old Server Karametov was imprisoned for 10 days after standing in defence of political prisoners with a placard reading: ‘Putin, our children are not terrorists!’.  Emiruseinov’s father, Reshat, was one of the over 100 Crimean Tatars who stood with such placards on 14 October.  Like most, he was prosecuted and faced a 10 thousand rouble fine for what even according to Russian anti-protest laws was a legal picket.

It is not at all inconceivable that Rustem Emiruseinov was arrested in place of his elderly father who might well not survive the torture-like conditions that the men are held in.

32-year-old Arsen Abkhairov is married with two very small children.  His wife Azize recounts that the men who appeared took her telephone away immediately, as well as a laptop and religious literature.  They not only refused to allow her to make any calls, but also prevented her from even seeing the court order.

Eskender Abdulganiev is only 21 and does not have a family of his own. Although the youngest of all the Ukrainian Muslims arrested in these cases, he is bearing up very well, his lawyer Lilya Hemedzhy says, adding that you can only envy his strength of spirit.

The men, their wives, parents and, unfortunately, the older children, are well-aware of what these arrests that Russia has brought to Crimea mean.  The FSB have a set format for such prosecutions with one person designated ‘the organizer’ of a supposed ‘Hizb ut-Tahrir cell’, while three or more other men are charged with ‘involvement’. Hizb ut-Tahrir is a peaceful pan-Islamic organization which is not known to have committed any acts of terrorism or violence anywhere in the world.  It is legal in Ukraine, however back in 2003 the Russian Supreme Court declared it ‘terrorist’ without providing any proper grounds and keeping the ruling secret until it was too late for the organization and human rights NGOs to appeal against it.  An expert from the renowned Memorial Human Rights Centre, Vitaly Ponomaryov believes that Russia may have declared the organization terrorist to make it easier to extradite people to Uzbekistan where they almost certainly faced religious persecution and torture.

It appears that Emiruseinov is to be charged under Article 205.5 § 1 of Russia’s criminal code (‘organizing’  a group which Russia has claimed is terrorist) with this carrying a sentence of up to life imprisonment.  Abkhairov and Abdulganiev face the slightly lesser charge of ‘involvement’ in such a group (Article 205.5 § 2) with this carrying a sentence of from 10 to 20 years.

There is absolutely no need for any of the men to have ever committed any crime, just as it does not matter that there is no evidence at all to back the designation of Hizb ut-Tahrir ‘terrorist’.  Such prosecutions are based on illicitly-taped conversations that can be on any subject since the FSB uses its own ‘experts’ to find ‘proof’ of involvement in Hizb ut-Tahrir where there is none.  It also uses ‘secret witnesses’ who provide the ‘testimony’ demanded of them without their identity in any way able to verify.