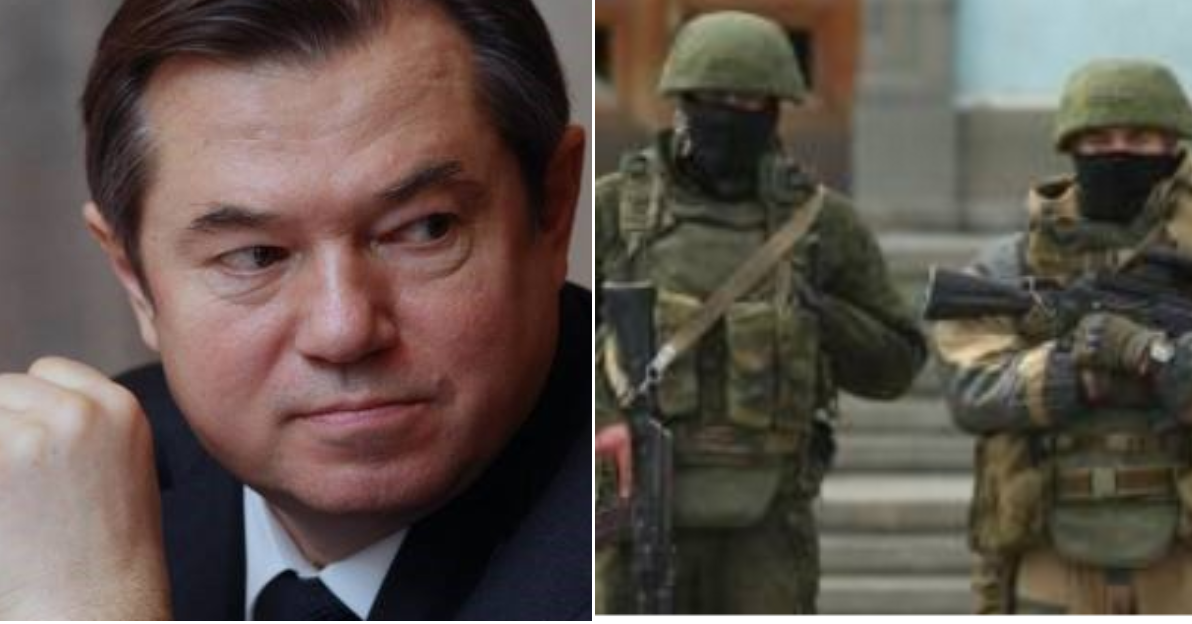 Although the international community has remained united in refusing to recognize Russia’s annexation of Ukrainian Crimea five years ago, it has been disturbingly willing to accept Russia’s narrative about the supposed mass support in Crimea for this move.  Even those who recognize that the 16 March ‘referendum’ was flawed still assume that euphoric crowds with Russian flags are somehow more reliable than the surveys carried out before Russia’s invasion that found only a minority in favour of joining Russia.

One major source of evidence of the methods Russia used in both Crimea and other parts of Ukraine in 2014 has not received the attention it deserves.  The Glazyev tapes were first made public by Ukraine’s SBU [Security Service] in August 2016, with more recordings revealed during the trial (in absentia) of former Ukrainian President Viktor Yanukovych.  They appear to be intercepted telephone conversations between Sergei Glazyev, a senior adviser to Russian President Vladimir Putin and various other figures, including Konstantin Zatulin, Director of the Russian Institute of CIS Countries who was declared persona non grata in Ukraine back in 2006 for activities linked with seeking Crimea’s secession from Ukraine.  Zatulin admitted soon after the initial publication that his voice is on the tapes, though claimed that they were a manipulative montage.  Both Glazyev and Zatulin have reportedly received the Russian state awards ‘For the return of Crimea’ given to those who played a direct role in Russia’s annexation.

Ilya Ponomaryov, who in 2014 was the only State Duma deputy to vote against annexation, does not believe that Glazyev was an influential figure responsible for the annexation, unlike the Russian Defence Minister Sergei Shoigu who, he says, led the Crimean ‘operation/ and Putin aide Vladislav Surkov.  He does, however, suggest that it may have been Glazyev who got the Kremlin interested in the idea of a so-called ‘Novorossiya’ (encompassing Donbas and other south-eastern oblasts of Ukraine which Russia appears to have hoped to seize after Crimea).

The tapes unfortunately cover only a very small period of time – from 27 February to 3  March 2014.  It is, however, very clear even from the conversations intercepted on those days that Glazyev and Zatulin were “financing” supposedly separatist protests in Crimea, Kharkiv, Odesa and Zaporizhya. The amounts of money mentioned are high enough to mean that this was no private venture on Glazyev’s part and easily enough to ensure a considerable number of paid ‘pro-Russian protesters’.  It is equally evident that certain Ukrainian politicians (Vadim Kolesnichenko; Oleg Tsarev; Viktor Medvedchuk and Serhiy Kivalov), as well as one religious figure (Metropolitan Agafangel from the Orthodox Church under the Moscow Patriarchate) were, at very least, seen as allies.

On 27 February, for example, Zatulin mentions to Glazyev that he has already spent 25 thousand dollars, and that he needs a further fifty thousand by the next day.  The money seems earmarked not only for Crimea, but for paying people in Kharkiv and Odesa.

Later that day, Zatulin reports that “we have financed Kharkiv, financed Odesa”.  There are ‘applications’ from other regions, he adds, but that he’s put them on hold while the question of finance is resolved.

With regard to Crimea, Zatulin mentions that there are about six thousand people with Russian flags, and a few ‘talking heads’, but that two prominent pro-Russian politicians Sergei Aksyonov and Sergei Tskekov are nowhere to be seen.  Glazyev uses vulgar language, adding: “and we fed them so much”.  In the following conversation, it becomes clear that Glazyev does not support Aksyonov’s supposed ‘election’ as Crimean ‘leader’ on the afternoon of 27 February.

Of those six thousand pro-Russian demonstrators, it is likely that many were the ones brought in by coaches for a counter-demonstration to the 10 thousand-strong demonstration organized by the Mejlis (representative assembly) of the Crimean Tatar People on 26 February.  It was that demonstration which almost certainly preventedv Russia’s plan of carrying off an apparently ‘parliamentary’ coup with pro-Russian politicians forcing through a ‘vote’ to change Crimea’s status.

It was thanks to Russia’s revenge offensive against the Mejlis and imprisonment and entirely lawless ‘trial’ of the Mejlis’ Deputy Head Akhtem Chiygoz, that a number of inconvenient details were revealed about Russia’s ‘operation’.  These included the accidental admission that among those present at the pro-Russian part of the demonstration were the so-called ‘private military company’ Black Sea and a paramilitary Cossack organization from Sevastopol.  It is believed, from the testimony of many witnesses, that it was after a large group of men arrived on coaches from Sevastopol and joined the pro-Russian demonstrators, that the pro-Russian side began behaving more aggressively (details here).

One of the key ideas that Glazyev pushes during his conversations is that all ‘uprisings’ must appear to be from the local population.  This had been the plan in Crimea on 26 February that the Crimean Tatars and other Ukrainians who gathered in support of Ukraine’s unity thwarted.  The tapes show that the same attempts were planned in Odesa and Zaporizhya.

One especially cynical detail about Crimea comes when Glazyev mentions the funeral of one of two people who died on 26 February.  “We need to somehow present this cases correctly from the propaganda sense.  So that they’re heroes and so forth”.  Viktor Postny died that day of a heart attack.  While the death of Valentina Korneva was clearly the result of her ending up caught in the demonstration (in the pro-Russian area), her husband stated during the Chiygoz ‘trial’ that he did not think the Crimean Tatars on trial had been in any way responsible and that he suspected it had been the paid thugs brought in for the pro-Russian meeting.

During the Yanukovych trial, Iryna Romaliyska from Censor.net published* annotated transcripts of all the recordings.  They are well-worth reading or listening to for other gems, such as one of the conversations about Yanukovych.  Glazyev is pushing the official line that needs to be brought in to give ‘legitimacy’ to what is happening in Crimea.  Yanukovych had fled from Kyiv on 21 February, leaving his official and semi-official residence at Mezhyhyria plundered but still capable of staggering Ukrainians by their obscene (and tasteless) opulence.  Zatulin disagrees, saying that Mykola Azarov, Yanukovych’s Prime Minister, could be used instead since ‘his Mezhyhyrya’ is not been shown on television.

While Glazyev and Zatulin are clearly not the ones making key policy decisions, the role effectively spelled out by these tapes, of financing attempts to orchestrate apparent local insurrections has received lots of confirmation from other sources.   That Russia’s appetite extended to all of the so-called ‘Novorossiya’ is certainly suggested by another document which Novaya Gazeta reported in February 2015.  If authentic, this is a plan, linked with Konstantin Malofeyev, for ensuring the ‘integration’ of Ukraine’s eastern oblasts with the Russian Federation.  As the newspaper pointed out, the document is of interest particularly since it was believed to have been passed to the Kremlin in early February while Yanukovych was still in power in Ukraine.

Probably the most proof of Russia’s direct involvement has emerged from Odesa where the tragic disturbances and fire of 2 May 2014 may have prevented Odesa becoming the next oblast to follow the fate of parts of Donbas.

Once again, it was largely as a reaction to Russia’s aggressive attempts to turn the 2 May tragedy into a ‘massacre’ that journalists, rights activists and others from the 2 May Group worked tirelessly to understand the reasons for the events on 2 May 2014 and uncovered a clear trail leading directly to Moscow.  The film 2 May. Moscow trail demonstrates how the same people involved in an earlier attempt to seize control and declare an ‘Odesa people’s republic’ and heard discussing this on the Glazyev tapes, also initiated the mass disturbances in Odesa on May 2, 2014, and the seizure of the Trade Union building that led to the fire.  It was specifically that organization, ‘Odesa Druzhyna’, that Zatulin mentions ‘working with’ and paying in the Glazyev tapes.

The film explains that Odesa Druzhyna appeared for the first time in late February 2014, with its leader Maidanek [Odinov] and other main figures coming from the neo-Nazi ‘Slavonic Unity’ organization.

On 1 March 2014, there was a rally of around 5 thousand pro-Russian supporters on Kulikove Pole, including members of Odesa Druzhyna, armed with sticks, etc.

There is a conversation on the Glazyev tapes that same day between Glazyev and Kirill Frolov, a Russian national from the pro-Russian group calling itself the Union of Orthodox Citizens of Ukraine.  Glazyev stresses that rallies are not enough and says that there needs to be a session of the Regional State Administration where they declare the post-Maidan government in Kyiv illegitimate.  Frolov expressed concern that the council members might not come, but is told that there have been such sessions in Kharkiv and Donetsk, and it must happen in Odesa.

Frolov comes back with Denis Yatsyuk, one of the leaders of Odesa Druzhyna, as one of the people ready to storm the administration and ‘appeal for help’ to Russia.  Yatsyuk tells Glazyev that “we have people who in principle are ready to act, but who need some specific, clear and understandable recommendations”.  They also need guarantees, he says, and is told by Glazyev that the Council of the Federation has just voted in the President’s decree.  Neither man spells out which decree, but it is clear that what is meant is the ominous carte blanche given on March 1, 2014, for Russian forces to be sent into other countries.  Therefore, Glazyev says, “this is very serious, and you’ll be supported, don’t worry.”  He stresses that there need to be mass appeals directly to Putin asking him, Russia to defend them.   They must, however, also organize a decision from an extraordinary session of the regional council.

Although the film produced for Dumskaya TV does not go into detail, Dumskaya journalists earlier pointed out that Glazyev’s instructions were partially carried out.  At the meeting on March 1, a referendum was demanded and a meeting outside the regional council two days later.  Valery Kaurov was present at the rally and also called Glazyev’s office to tell him that they had stormed the building and “need help”.

During the session, the building was surrounded by anti-Maidan activists who blocked all the exits, while Kaurov and Anton Davydchenko tried to put the proposals for declaring an ‘Odesa people’s republic’ and announcing a ‘referendum’.

They were stopped and thrown out of the hall by three of the deputies.  By that stage pro-Ukrainian Odesa residents had also begun gathering outside, and the scenario turned quite different.  The regional council in fact became the first council in Ukraine to vote a resolution condemning Russian aggression and the incursion of any foreign military on Ukrainian territory.

The understanding from the Glazyev tapes that supposed ‘separatist’ attempts were, in fact, being financed via these Russian politicians also corresponds with the account given back in 2015 by Serhiy Rudyk, one of the activists from Odesa Druzhyna arrested over the 2 May disturbances.  He told members of the 2 May Group that the anti-Maidan protests on Kulikovo Pole had been paid for by Moscow, and mentioned rumours that Moscow had paid 2 million dollars for the entire ‘Kulikovo Pole project’.

Although the tapes scarcely mention Donbas, the same basic attempts were made, at least in Donetsk, to use far-right activists, like Pavel Gubarev, who had once been involved in the neo-Nazi Russian National Unity movement to create a so-called ‘people’s uprising’.  That didn’t work, so Russia sent a number of ‘tourists’ (thugs of athletic build) to take part in demonstrations.  It was when even that didn’t work that (apparently) former Russian military intelligence officer Igor Girkin and heavily armed men began seizing control in April 2014.

Russia lost Odesa on 2 May 2014, but immediately began a cynical propaganda exercise about a non-existent ‘massacre’ in which Glazyev has also played an active role.

Ukraine had no chance of defending Crimea against Russian soldiers.  It can combat Moscow’s attempts since 2014 to rewrite history, whiting out the inconvenient truths. There is plenty of damning proof, including from the Glazyev tapes.