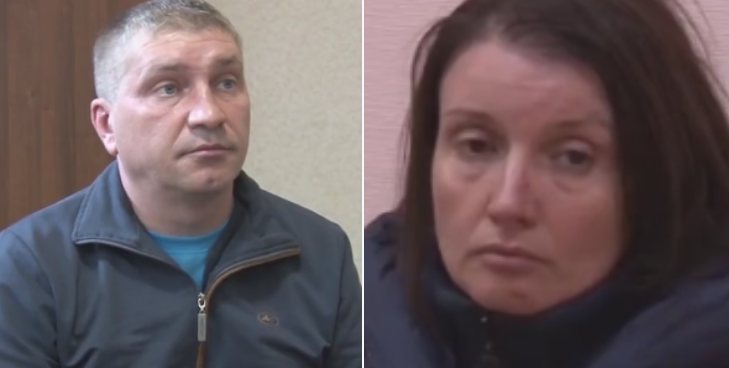 A former Ukrainian military serviceman who is on Ukraine’s wanted list for betraying his country after Russia’s invasion of Crimea has been sentenced by a Russian military court to ten years’ maximum security imprisonment for supposed ‘state treason’ against Russia.  Dmitry Dolgopolov and his common-law wife Anna Sukhonosova were accused of having gathered secret information for Ukraine’s Military Intelligence.  Sukhonosova, a Crimean fitness trainer, was sentenced to nine years in a medium-security prison colony.

The couple were arrested in Crimea on 27 September 2017 and have been in custody ever since, with the only information about the case coming from Russia’s FSB and, on 28 February 2019, from the Northern Caucuses District Military Court.

In September 2017, much was made of the arrests on Russian state television, with the standard FSB videos shown of the arrests, and also of Dolgopolov ‘confessing’ to having handed over secrets to Ukraine’s Defence Ministry.

The court reported on 28 February 2019 that sentences had been passed on Dolgopolov and Sukhonosova in a closed court hearing, with the charge being under Article 275 of Russia’s criminal code (‘state treason’).

The prosecution claimed that in 2015 Sukhonosova had, while in mainland Ukraine “been recruited by the security service of that state”.  She was then supposed to have returned to Simferopol and suggested to Dolgopolov that he provide “information of a military nature constituting a state secret” received through his service in the Russian Armed Services for financial remuneration.

It is claimed that in 2017, Dolgopolov, while carrying out his work (in the Russian military) used his mobile phone to secretly photograph material, “being convinced that they were secret”.  He is supposed to have passed this to Sukhonosova who then “via the Internet” sent it to a representative of the Ukrainian Security Service.

The court report states only that the couple were found guilty and handed the above-mentioned sentences, with the sentences still subject to appeal.  The FSB claimed that both defendants ‘admitted guilt’ and expressed ‘repentance’.  The sentences were lower than the usual 12-year minimum, so that may be the case, however it seems strange that the trial, which began on 9 January, took nine hearings.

Since all of the trial took place behind closed doors and both Dolgopolov and Sukhonosova had state-appointed lawyers, whose role is generally to ensure that the person ‘confesses’, there is no way of properly checking the FSB’s assertions.

When Russia invaded Crimea, Dolgopolov was the deputy commander of an artillery unit based in Simferopol.  Russian soldiers without insignia and armed paramilitaries besieged the unit on 28 February 2014.  Some of the Ukrainian soldiers remained faithful to their oath of allegiance and were evacuated from Crimea, while others, including Dolgopolov changed sides and joined the Russian armed forces. Back in 2017, Krym.Realii spoke with two of Dolgopolov’s former colleagues, Oleksiy Mazepa and Vladislav Seleznyov.  Both expressed open scepticism about the FSB’s claims, with Seleznyov saying that “knowing Dmitry’s moral and work qualities, I very much doubt that he was left on Crimean territory to carry out some kinds of special tasks under top secret cover”.

It is worth remembering that Russia’s FSB have also arrested over 10 Ukrainians on similar charges in occupied Crimea.  In virtually all these cases, similar videos have been shown on Crimean and Russian television with the person detained ‘confessing’.  In a number of these cases, the eventual convictions had little or no connection to their earlier ‘confessions’, and in most cases, the men detained have said that the confessions were given under torture.