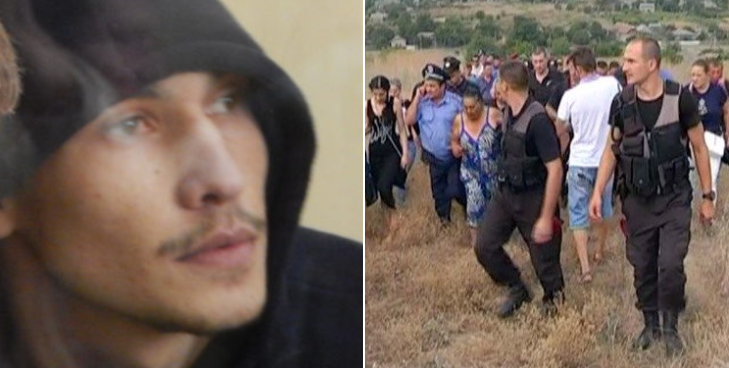 Apparently damning ‘evidence’ linking a murdered child with the young Roma man whose arrest for the killing led to appalling riots in the Odesa oblast may have been faked  It would be difficult otherwise to explain how the hand swab taken from the suspect contained only the murder victim’s DNA, and not his.

This is not the first indication of problems with the indictment against a young man held in detention for over two and a half years, who has reportedly contracted tuberculosis while in custody.  It is, however, particularly disturbing since it would seem to point to deliberate falsification of evidence.

Chebotar, then 21, was arrested shortly after 8-year-old Angelina’s body was found near her home in Loshchynivka on 27 August 2016.  The young man had lived in the area all his life, however the fact that he was of Roma origin was used by around  local residents to prompt riots that destroyed several Roma homes and forced their inhabitants to flee.  The riots made world headlines, in part because the authorities effectively went along with the rioters, ‘persuading’ Roma families to leave the area.

The trial for murder of Chebotar began in November 2017 in the Prymorsky Court in Odesa and has so far only questioned six witnesses, with 44 others due to be called, as well as eight experts.

On 14 February, the court yet again extended Chebotar’s detention, rejecting the defence’s application for a less severe restraint measure.  That ruling came after testimony that appears to give Chebotar an alibi and on the same day as testimony which seriously undermines crucial evidence against the young man.

Tetyana Gerasimova, from the Centre for Legal Monitoring, reports that the questioning, by video link, took place on 14 February of Ihor Manzoruk, the specialist who carried out molecular-genetic expert assessments of the blood of the murder victim and of Chebotar and compared these with traces of DNA on a list of items provided by the Central Department of the National Police in the Odesa oblast.

The proceedings began with one of Chebotar’s lawyers, Andriy Leshchenko, asking that two documents be added to the case material, namely the letter sent together with the items and the protocol recording receipt of DNA samples from Chebotar for the assessment, these being swabs from both hands.

During questioning, Manzoruk explained that he had looked for traces of blood on the items and then compared any found with the blood samples from the victim and from Chebotar.

The defence was interested in what appeared to be a number of alleles (variant forms of a given gene) found which did not belong to either the murdered girl, or to the defendant.  Manzoruk asserted that these were either technical glitches, typos, or still linked to the victim and defendant.  Gerasimova notes that these answers seemed to arouse doubts in the objectivity of Manzoruk’s conclusions since one of the judges, Vadym Kovalenko asked him if there would be enough genetic material on the items for an additional molecular-genetic assessment.

The main mystery, as mentioned, is the fact that the swabs from both Chebotar’s left and right hands contain only Angelina’s DNA, not Chebotar’s.

Asked if he could have been sent the little girl’s DNA which was presented as being Chebotar’s, Manzoruk answered that this was “outside of his competence”.

It is important to note that there is another analysis, carried out by a different expert, of hand swabs from the murdered child.  According to the second lawyer, Serhiy Ivaniv, this also found extra alleles, as well as the little girl’s DNA, but, unlike Manzoruk, attributed these to an unknown individual.

As reported, there are other problems with the charges against Chebotar. On 10 December 2018, Oleh Halev, the forensic expert who first examined the little girl’s body gave a detailed account of the various methods which led him to conclude that Angelina had been killed during the night of 26-27 August between 22.00 and 1.25 a.m.

Since the prosecution claims that Chebotar committed the crime at 3 a.m., and the latter has an alibi until 2.30 a.m. at the very earliest, the time of Angelina’s death is critical.  Gerasimova  notes that there were very tense moments in court and gives an almost verbatim account of the questions asked, which were clearly aimed at seeing if the possible time of the crime could be stretched to 2.30 a.m., meaning that the defendant could have committed it.

Halev appeared to waver a lot under questioning, however did state that he believes the latest possible time to have been 2 a.m.

In earlier comments about the case against Chebotar, Gerasimova suggested that, having grabbed the young men, the investigators had beaten testimony out of him and concocted the case against him.  She did, however, stress that there was some evidence against Chebotar.  His cap was found lying on her bed, the murder weapon was found at his home and there appears to be a trace of his DNA on the little girl’s hand, together with the DNA of a person who has not been identified.  The sheer obviousness of the first two pieces of evidence, the doubts about the authenticity of DNA samples, and the fact that from the first moments of the investigation, no other version but Chebotar’s guilt was ever considered make it increasingly clear that this trial needs close scrutiny.  It is worrying that, because Chebotar was arrested so early, and no other versions were continued, samples were never taken of others’ DNA.

It was the events in Loshchynivka following Angelina’s murder and Chebotar’s arrest that were widely published, including in the international media.

It is unclear what methods were used to persuade the local Roma community to leave Loshchynivka, but the very fact that the local authorities obtained such agreement essentially meant that they were siding with the rioters.