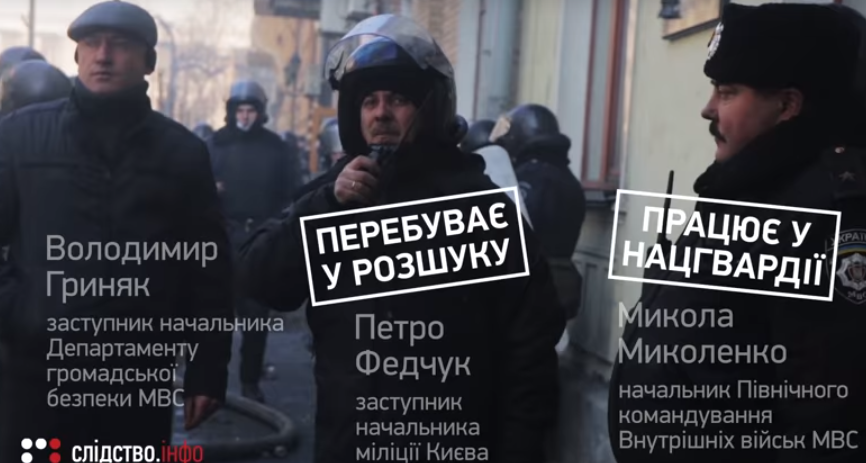 Slidstvo investigative journalists have scrutinized video footage from 18 February 2014 and identified five places where a person who looks like Ukrainian National Guard general, Volodymyr Hrynyak, appears to be actively involved in the enforcement bodies’ violence against Maidan protesters.  In one shot, he can be seen in the company of a high-ranking enforcement official wanted for his role in crushing the protests and hiding from justice in Russia.  None of this is news to prosecutors from the Special Investigations Department, who first laid charges against Hrynyak in December 2016, but it does make it even more baffling that Hrynyak has not only continued to hold high office, but has even been promoted to a higher rank since Maidan.

Hrynyak was the former Deputy Head of the Interior Ministry’s Department of Public Security, and now heads an analogous department within Ukraine’s National Guard. He is accused of involvement in organizing the deliberate killing of Maidan protests on 18 February, 2014, one of the bloodiest days of Euromaidan; of obstructing protests; and of other offences.

He was appointed commander of a merged police unit during Euromaidan, and investigators from the Special Investigations Department believe that he coordinated enforcement officers during the protests.  Even without the video footage and other evidence, that position alone makes it startling that he simply moved into an analogous post after Maidan, one that would mean that he was once again responsible for dealing with mass protests.

At least four Maidan protesters were killed in the morning of 18 February, and around 200 injured, when Berkut and Internal Forces officers tried to disperse protesters heading towards the Verkhovna Rada, including with the use of firearms.

On one of the video shots, Hrynyak can be seen standing next to Petro Fedchuk, the Deputy Head of the Kyiv Police and Mykola Mykolenko, Internal Forces General. The Special Investigations Department has issued indictments against Fedchuk over the violent dispersal of young students on Maidan on 30 November 2013.  It was largely outrage over the gratuitous brutality showed by Berkut then brought huge numbers of Ukrainians out onto the streets.  As mentioned, Fedchuk is in hiding in Russia where he appears to be using his experience in crushing protests for the regime of President Vladimir Putin.

Challenged by Slidstvo journalists over the video shots, Hrynyak claimed that he had simply been walking by, as he lived in the centre of Kyiv.  This does not explain many things, including why, in one of the shots, he seems to be holding a weapon. He claims that during Euromaidan, he was effectively suspended from carrying out his duties.

This is not the view of the Special Investigations Department, and certainly not borne out by the records of the telephone calls between him and top enforcement officers during the protests. Yevhenia Zakrevska, lawyer representing Maidan victims or their families, told Slidstvo that at certain times, Hrynyak was the highest-ranking head amongst the police coordinating Berkut and the internal forces.

It is no accident that both Zakrevska and the Head of the Special Investigations Department, Serhiy Horbatyuk gave interviews to the Slidstvo team, nor is it the first time that Horbatyuk has seen no choice but to publicize information about high-ranking officials under suspicion, in particular, Hrynyak.

On 2 October 2017, he gave a press briefing at which he said that the resistance his Department had encountered when seeking the arrest of these first high-ranking officials had prompted them to publicly accuse the top Interior Ministry management of sabotaging their work and, within the limits demanded by the fact that this is on ongoing investigation, to set out details about the men, including Hrynyak, under suspicion and the charges they were facing.

Horbatyuk said then that Hrynyak and Serhiy Pohotov, then First Deputy Head of the Department of Public Security had received instructions from top police management during the storming on February 18 and passed these on, including to Berkut commanders.  The infographs demonstrated at the briefing clearly set out whom the men had communicated with during the relevant period.

Hrynyak, for example, had received 39 calls from the Deputy Interior Ministry, as well as over 50 calls from his own direct management.  He had also spoken with the Department of Public Security.  He himself had made less outgoing calls, which the investigators believed was because he had passed on instructions to Berkut via two subordinates who were both in contact with a number of Berkut commanders.. He had, however, held direct calls with the commanders of four Berkut units during that night.

The investigators sought back in December 2016  to have Hrynyak remanded in custody, but to no avail. There was simple resistance just prior to the 2 October press briefing to attempts to secure the detention of Pohotov and the two subordinates – Anatoly Seredynsky and Ihor Babych, with it likely that pressure had been brought to bear on the judge.

Horbatyuk noted that the assertion made by the Interior Minister Arsen Avakov that Hrynyak was innocent could in itself be viewed as pressure on the court.

The case against Hrynyak was only passed to the court in May 2018,  In the nine months since then, the court has still not begun considering the case on its merits.