Children taught how to hunt ‘the enemy’ and disperse protests in Russia and occupied CrimeaCrimean children take oath to serve as friends of the Russian FSBPutin’s ‘Russian World’: Children taught war and violently detained for daring to protestRussia recruits children for ‘Youth Army’ & now plans to use kids for propaganda about CrimeaMass armed searches for ‘prohibited books’ and arrests in Russian-occupied Crimea Russia imprisons rights activists for ‘terrorism’ & terrorize their children Russia hits new low through detention of Crimean Tatar nurse helping sick childrenRecord sentence in mounting persecution of Jehovah’s Witnesses in Russia and occupied Crimea Exposing the ‘experts" who secretly help to imprison Crimean and Russian political prisoners Crimean Tatar political prisoners illegally taken to Russia in appalling torture conditions Russia threatens criminal prosecution over calls to impose sanctions Russia indoctrinates children to want ‘to defend’ occupied Crimea against Ukraine Crucial victory for Ukraine in ECHR case against Russia over Crimea Crimean Tatars sentenced to 18, 17 and 13 years for discussing their faith and Russian persecution Mass detention of Crimean Tatars travelling to political trial in Russia Next, Russia will come for the children Lukashenko plotted to kill Sheremet yet Ukraine has charged people with no motive for his murder The childhood Russia ended in 2020 with machine guns and arrests Moscow’s proxy ‘republics’ announce that Donbas is and always was ‘Russian’Russia begins its most repressive trial of Crimean Tatar journalists and activists
• Topics / Children’s rights
• Topics / News from the CIS countries
• Topics / Human Rights Abuses in Russian-occupied Crimea 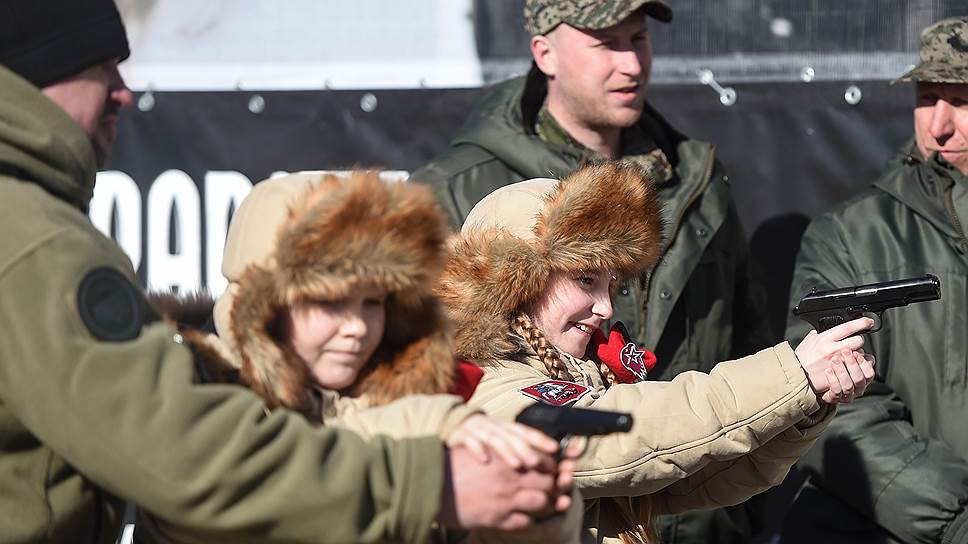 Russia’s Defence Ministry is reportedly seeking the creation of ‘Yunarmia’ [‘Youth Army’] units at all defence industry enterprises in its drive to get one million children and young people ‘enlisted’ by 2020 in a structure that has been compared to the Nazi Hitlerjugend.

The Russian newspaper Kommersant reported on 12 March that ‘proposals’ to create such Yunarmia units had been sent to the management of all defence enterprises in the middle of February.  The letter spoke both of the need for Yunarmia units to be created, and “for work of Yunarmia military – patriotic sections, groups and clubs to be organized at all available socio-cultural and sports sites”.  The enterprises were also asked to report on this ‘work’.

Kommersant has received no response to its attempts to get official Defence Ministry comments on this report, or with respect to an earlier document, apparently seeking 100% engagement of all children, aged from 8 to 18, of military officers in Yunarmia.  If the letter to all enterprises seems couched in terms of a ‘request’, the document dated 29 January 2019 and widely circulated on social media leaves little doubt that any officers who did not get their children involved in this ‘army’ would face problems.  This ‘telegram’, signed by Alexander Manakov, acting deputy commander on military-patriotic work of the Eastern Military District, cites a meeting held by the Deputy Defence Minister and head of central military-political department, Andrei Kartapolov.  This speaks of the need to “actively develop the military-patriotic movement Yunarmia”, with the children of military servicemen being the basis.

Lest anybody think this is a mere recommendation, Manakov asks that the absence of the children of officers from the ranks of Yunarmia “be viewed as a lack of understanding by the military officers of the foundations of state policy regarding the patriotic upbringing of citizens”.

Yunarmia was created on 29 October 2015 at the initiative of Defence Minister Sergei Shoigu, though it took several months before the public became aware of this children’s ‘military-patriotic formation’.  This children’s army” clearly received significant Defence Ministry support from the outset, with 76 regional branches having been opened within the first eight months. Yunarmia was itself reporting 140 thousand members in 2016, and that figure is now reportedly around half a million, with the plan being to double this by 2020.  The Defence Ministry described the Youth Army as having emerged “at the initiative” of Shoigu and as being “supported by” Russia’s President Vladimir Putin.  It seems likely, in fact, that the ‘army’ was always planned as part of the ‘Russian Movement of School Students’, created by presidential decree on October 2015.

There was no public discussion about the formation of such an ‘army’ which was first mentioned back in January 2016. The media noticed it in May after an official gathering of members from all over the country with the participation of Shoigu and the leadership of his ministry. Shoigu promised the children vivid experiences, plane journeys, parachute jumping and going on military submarines.  They would be able to shoot from anything except rockets, and travel on all forms of transport.  What child or teenager would say no, especially when they come from the provinces where there is nothing to do or hope for?

In an early probe of the movement, Roman Popkov from Open Russia stressed that military generals were openly admitting that they want to teach kids to fight from an early age.  The enforcement bodies, Popkov said, were demonstrating that the new ‘movement’ was a part of the state and here for a long time, all of this being reminiscent of Hitlerjugend, both in the ideological component and in the concentration on militarism.

It is important to stress that this supposed training in ‘patriotism’ is illegally involving children from occupied Crimea.  There is very clearly a drive on for membership, and the above directives only strengthen the doubts expressed from the beginning as to how ‘voluntary’ membership would be.

In March 2018, the Russian Guard, a body dubbed Putin’s army , together with ‘Berkut’ Russian OMON police, held a ‘patriotic event’ in Dzhankoy.  Over ten schoolchildren were accepted into Yunarmia, after tasks that included shooting and putting together an assault rifle.

All such events are accompanied by tests on Russian history and a focus on developing ‘patriotism’, with this clearly presented as being linked with so-called ‘Russian values’.

This came shortly after a ‘military quest’ organized by the Russian Defence Ministry in occupied Crimea.  According to the Ministry’s announcement, “young patriots had to gather as much different information as possible about the enemy, uncover their opponent’s secret plan, overcome complicated obstructions and save comrades in need”.

While no specific ‘enemy’ was identified, Russia has tried to ramp up anti-Ukrainian sentiments ever since its invasion and annexation of Crimea, and a considerable number of Ukrainian political prisoners are effectively claimed to have been the ‘enemy’ Russia was training children to hunt and catch.

Telegram demanding 100% membership in the Youth Army of all children, aged 8-18, of officers 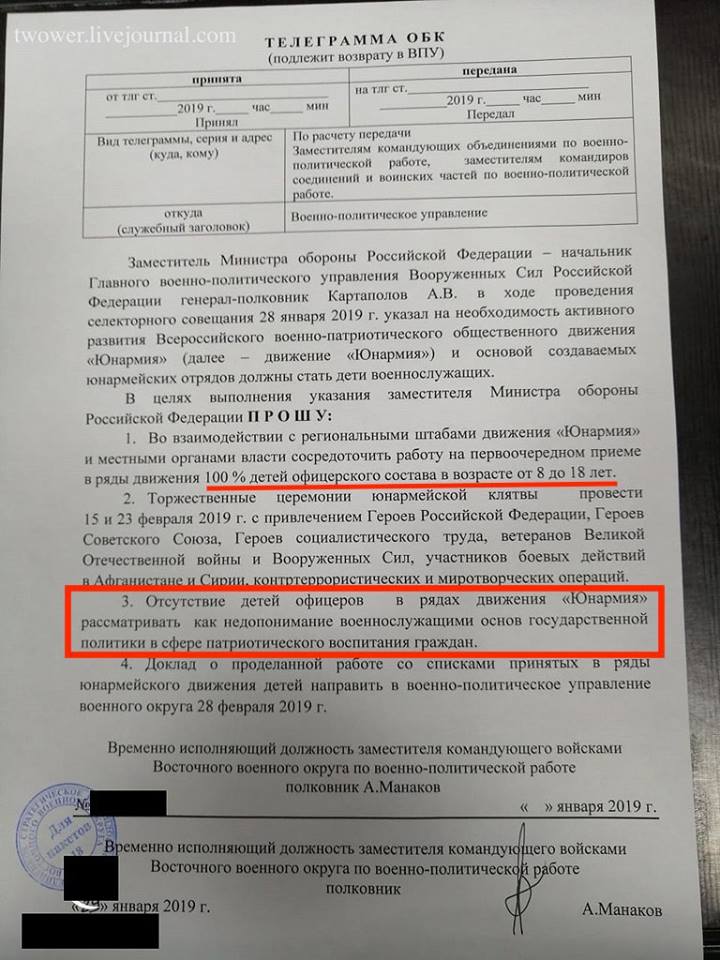