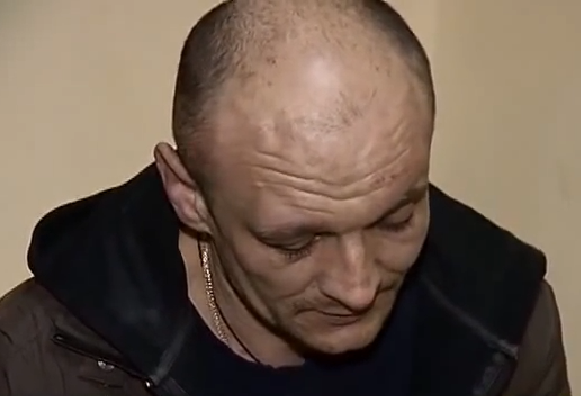 Russia had seized its first Ukrainian political prisoner even before completing its illegal annexation.   Mykola Shyptur has now been imprisoned for over five years serving a 9-year sentence on a surreal charge of attempting to murder paramilitaries who were trying to abduct, and probably kill, him.paramilitaries

It is bitterly poignant that Shyptur had come to Crimea for a demonstration in support of Ukrainian unity on 9 March, the 200th anniversary of the great Ukrainian poet Taras Shevchenko’s birth.  During the later Soviet years, when protests of any kind would get you arrested, people would gather near monuments to Taras Shevchenko , including on the anniversary of his birth on 9 March 1814.  Since Russia’s invasion in 2014, this has once again taken on huge symbolic importance for Crimeans, though any gathering is likely to result in prosecution for an ‘unauthorized protest’.

Shyptur was born in Ivano-Frankivsk on 26 May 1978, and has a wife, Yulia, and son, now 13, whom he has not seen for five years.  The family had been living abroad for some time, however they were back in Ukraine when Euromaidan began.  Shyptur spent several months on Maidan, and then set off for Crimea, where armed paramilitaries, including many Russian Cossacks were helping Russian soldiers to seize control.

He was one of four Maidan activists, together with Serhiy Tkachuk, Vladislav Polishchuk – a doctor, and Olha Chernyatynska who arrived separately in Sevastopol on 7 March 2014.  They spent the first two nights before the planned pro-unity rally for the Shevchenko bicentenary trying to circulate leaflets explaining the farcical nature of the so-called ‘referendum’ which Russia was using as a smokescreen for its forced annexation.

The account of events on 9 March given by Tkachuk and Polishchuk is backed by the BBC correspondent present.  All speak of the pro-unity demonstration having been peaceful, and attacked by “Russian Cossacks with whips” and other aggressive ‘self-defence paramilitaries’.

The two other men were badly beaten by the paramilitaries, but they, Shyptur and Chernyatynska managed to get back to the flat that local activists had rented for them.  They were aware that the paramilitaries would be able to recognize them, and planned to lay low.

It was at very least strange that Chernyatynska suddenly announced that she needed to go into the city.  They tried to dissuade her, warning that if she was caught, it wouldn’t be just herself that got into trouble, but she didn’t listen.  Then around 20 minutes later, she rang Shyptur asking him to come and help her.

It is not clear what exactly she said, but Shyptur pulled out a pistol that the other men were unaware that he had, saying, as he ran out the door, that it might be needed.

As the others had warned, Chernyatynska did indeed lead paramilitaries to the flat, but only after Shyptur, having found her surrounded by paramilitaries, tried to help them both escape by firing some warning shots.

He was caught and savagely beaten, with the torture methods used both then and later including an electric shock gun and savage injuries (breaking his fingers). Lawyer Edem Semedlyaev only saw him for the first time in 2016, yet reported then that he still bore the marks of the electric shocks.

The other three were held in captivity under 26 March, but were finally released and able to return to mainland Ukraine.

As mentioned, the gunshots meant that Shyptur faced a different fate, although they may have prevented the paramilitaries from abducting and killing him, as had already been the case with 39-year-old Crimean Tatar Reshat Ametov.  He had been seized on 3 March during silent protest outside the parliament buildings in Simferopol and savagely tortured to death.  It is likely that the so-called ‘self-defence’ paramilitaries were  also behind the disappearances of at least three other activists.

The police officer, called after somebody heard the gunshots, did have to record the event, which, it seems, prompted the police to remain firm when the paramilitaries tried to get them to simply hand over the Maidan activist.

A propaganda version of the events was shown on Russian-controlled local TV, with paramilitaries telling a police officer about how they had “detained” the young woman and how Shyptur had started shooting.  The report here also merged all events that day and claimed that the Maidan activists were guilty of “provocation”, and that Shyptur had opened fire at the paramilitaries.

Whether or not Shyptur should have had a gun on him, he did have serious grounds to fear for his life.

That was ignored throughout, as was the fact that all of this had taken place on Ukrainian territory.  Shyptur was ‘tried’ illegally under Russian law, with the version presented being that he had shot three times at A.V. Kulish, a member of ‘Russian Bloc’.  This, it was claimed, had been attempted murder (three times, at close range).

On April 28, 2015, judge Volodymyr Sybula from the Gagarin District Court in Sevastopol sentenced Shyptur to 10 years’ maximum security imprisonment.  He was convicted of illegally transporting weapons and of the ‘attempted murder of persons carrying out their official duties or civic duty’.  The appeal against Shyptur’s conviction was heard by another occupation court on June 16, 2015.  This court dropped the illegal transportation charge and therefore reduced the sentence by one year.  Since then he has been held in Prison Colony No. 1 in Simferopol.

It was only in 2016 that human rights activists learned of Shyptur’s existence and understood that his case bore all the hallmarks of politically-motivated persecution.  The Ukrainian Helsinki Human Rights Union has lodged an appeal on the family’s behalf with the European Court of Human Rights.