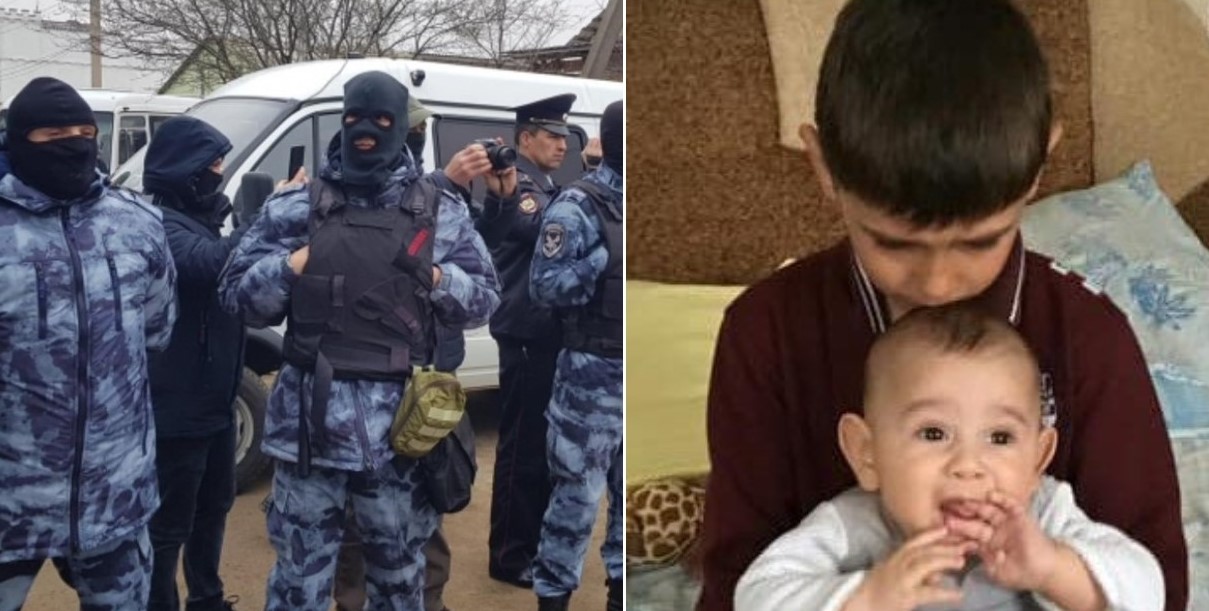 20 Crimean Tatars have been arrested, the majority of them activists of the Crimean Solidarity initiative which helps political prisoners and their families, and reports human rights abuses.  This is the latest, and most flagrant, of a series of attacks on Crimean Solidarity clearly aimed at intimidating Crimean Tatars and forcing them into silence about the mounting repression under Russian occupation.

News of the first search in Kamenka appeared on social media around 6 a.m. local time, and it rapidly became clear that as many as 25 homes had been targeted, in several districts around Simferopol (Kamenka, Stroganovka).  Journalist Anton Naumlyuk reported that the micro-district of Kukuruzne Polye was cordoned off and passport control posts set up after four of the men whom the enforcement officers had come for proved not to be at home. “Before that the FSB officers and police had gone around all homes, breaking into those which were empty, and searching them without any court order”

This was not the only report of gratuitously rough methods used by the armed men, who burst their way into homes where children and elderly people had been sleeping.

The nature of the ‘searches’ carried out is indicated by the fact that lawyers, who arrived swiftly to represent the men, were illegally prevented from being present.  As lawyer Emil Kurbedinov pointed out,  it was only the FSB information circulated to Russian and Russian-controlled media that enabled him to know where the armed and masked men were from.  Judging by his and other reports, it appears that the FSB were planting ‘prohibited literature’ and clearly did not want lawyers seeing this.

As mentioned, the men arrested on Wednesday are, in the main, activists, many of whom have tirelessly attended court hearings, streamed armed searches and detentions onto the Internet and have helped the families of political prisoners.  It is likely that most of them took part in the single-person pickets on 14 October 2017, under placards reading “Crimean Tatars are not terrorists.  Give children their fathers back” and “Fabricating criminal cases – it’s this that’s TERROR”.

Despite the fact that even Russia’s, repressive, legislation permits single-person pickets, a large majority of the 100 Crimean Tatars who took part faced administrative prosecution, with either fines or administrative arrest.  Some of the men arrested on Wednesday, such as  Remzi Bekirov and Riza Izetov have already been subjected to harassment and absurd administrative prosecutions.  None of this stopped them or others from coming to show support for victims of persecution and their families.

On Wednesday morning, large groups of Crimean Tatars gathered outside the homes of the latest FSB victims.  On at least one occasion, armed officers threatened them with prosecution for ‘holding an unauthorized meeting’ if they did not disperse.  They remained.

It was typically from the FSB report circulated on Russian state media that the full extent of the offensive on 27 March became clear.  RIA Novosti, for example, reported that “twenty participants in the terrorist organization Hizb ut-Tahrir have been detained in Crimea”.  The so-called ‘investigative measures’ (searches) had been carried out, the agency said, by the FSB, together with police and Russian National Guard units.

These reports are generally quite standard, with it again claimed that “the activity of a structure of the international terrorist organization Hizb ut-Tahrir has been stopped, with 20 people from among its leaders and members detained.”  The FSB report quoted, went on to claim that the men had carried out “anti-constitutional activities” …. “aimed at violently overthrowing the current regime.”

This is pure nonsense.  Hizb ut-Tahrir is a peaceful, pan-Islamist party, described in the important Chatham House study Transnational Islam in Russia and Crimea as tending “to avoid violent means and instead may focus on social work, education and dialogue initiatives”.   Hizb ut-Tahrir is legal in Ukraine and most countries, and the decision by Russia’s Supreme Court in 2003 to declare it a ‘terrorist organization’ was never justified, and was in fact concealed until it was too late for the organization and human rights NGOs to appeal it.  Vitaly Ponomaryov, and expert from the renowned Memorial Human Rights Centre, Vitaly Ponomaryov believes that Russia may have declared the organization terrorist to make it easier to extradite people to Uzbekistan where they almost certainly faced religious persecution and torture.

It is also clear in occupied Crimea that Hizb ut-Tahrir charges are being used as a weapon against civic activists, especially those involved in Crimean Solidarity.

It is a weapon which carries huge sentences, potentially up to life imprisonment, with the FSB and ‘prosecutor’ using ‘experts’ willing to write the assessments required of them, as well as ‘secret witnesses’.  This, it should be stressed, is not to prove that the men arrested have actually committed, or even planned a crime.  They are charged with ‘involvement in’ or ‘organizing’ a Hizb ut-Tahrir group, purely on the basis of conversations pertaining to religious or political subjects.  No more is required for prosecutions which are known to bring the FSB promotion while enabling them to persecute civic activists, not try to prevent real crimes.

20 men are now facing sentences of from 10 years to life.  55 children have had their fathers violently taken from them and that number is shortly to increase, since three of the wives are expecting.

The men arrested on 27 March 2019 (four others were not home, including Remzi Bekirov, but presumably have also been targeted in this attack)