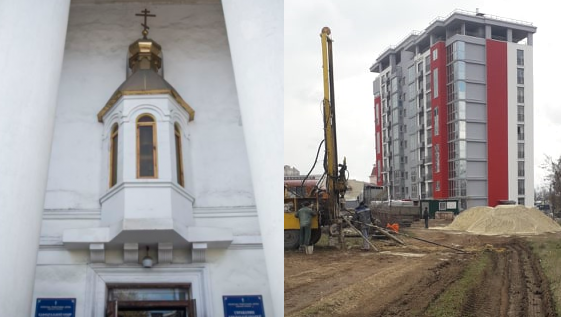 The Russian occupation regime has begun construction work on land allocated to the Ukrainian Orthodox Church back in 2012 for a new Christ the Saviour Cathedral  It had earlier asked Archbishop Klyment to hand over the land, and presumably considered that the Church’s refusal to relinquish its property ‘voluntarily’ allowed them to simply plunder it.

A photo of the construction site was first posted by Andriy Shchekun, a Crimean activist who was tortured and forced to leave Crimea after Russia’s invasion.  It is he who reported that the plan is to build a residential complex for FSB, or Russian security service officers,  and that they have begun geodesic surveys for building a church, which he assumes will be under the Moscow Patriarchate.  He seems to have based this conclusion on a letter from the de facto city authorities back in February 2015 which spoke of the FSB asking for land, supposedly to house military servicemen and their families.

Archbishop Klyment has confirmed that he found the work to have begun, without any prior notification, when he returned to Simferopol.  He has been informed that they are taking geodesic samples before designing the church. He does, however, note that there are cranes standing nearby, together with stone, ballast and cement, which does seem to suggest that building work is about to commence.

The Archbishop stresses that the land belongs to the Church, and that he has all the documents to prove this.  What is now happening has bypassed them altogether.

This is partly a move aimed at seizing a major site in Simferopol which, according to Klyment, he was initially offered 200 thousand USD to give up soon after annexation.  It is, however, also indicative of the repressive measures against the Ukrainian Church in Crimea.

On 27 March, the Church received another letter from this ‘ministry’, which terminated the lease agreement on the only OCU church remaining in Simferopol.  The letter claims that this is because the Church is in debt, although the amount cited is nominal, and Klyment denies that there is anything owed.

The letter arrived on the same day that the FSB carried out armed searches and arrests of 20 (and later a further four) Crimean Solidarity activists.  Eustrati Zoria, spokesperson for OCU, says that the two developments are linked, with the occupation regime carrying out a purge of those who don’t buckle under.

Archbishop Klyment was himself detained on 3 March, when he was already seated on a coach to Rostov in Russia for the latest hearing in the ‘trial’ of Russia’s youngest Ukrainian political prisoner Pavlo Hryb.   Two pretexts were found, both insultingly implausible, for holding Klyment in detention until late evening.  It is possible that the occupation authorities were planning administrative arrest, but were deterred by the publicity the move received (details here).

Archbishop Klyment announced on 23 March that he had submitted documents to register the Ukrainian Orthodox congregation in Crimea, a move that he had avoided for five years. He explained that the occupation authorities had given him three months to organize such documentation, and he saw no option now but to do so, since it was now a question of the eparchy’s very existence in occupied Crimea.

It remains to be seen whether the congregation will be registered and, mainly, whether the degree of pressure on the Church eases. This is, unfortunately, not at all guaranteed.  It was reported on 29 March, six days after the documents were submitted, that the occupation authorities had taken the Church to (a Russian-controlled) court to get it evicted, with the lack of registration cited as excuse. The Orthodox Church under the Kyiv Patriarchate came under fire immediately after annexation, at least in part because of its openly pro-Ukrainian position and its public statement on 11 March 2014 condemning Russian occupation of Crimea. Klyment warned late in 2018 that the persecution they were experiencing was likely to escalate after the creation of the Orthodox Church of Ukraine with autocephaly or independent status, a move met with rage by both the Kremlin and the Moscow Patriarchate.  This has proven to be the case, and with most of the churches already seized or forced to close, and only a small number of priests still left in Crimea, the danger to the Church’s very existence in Crimea was real.