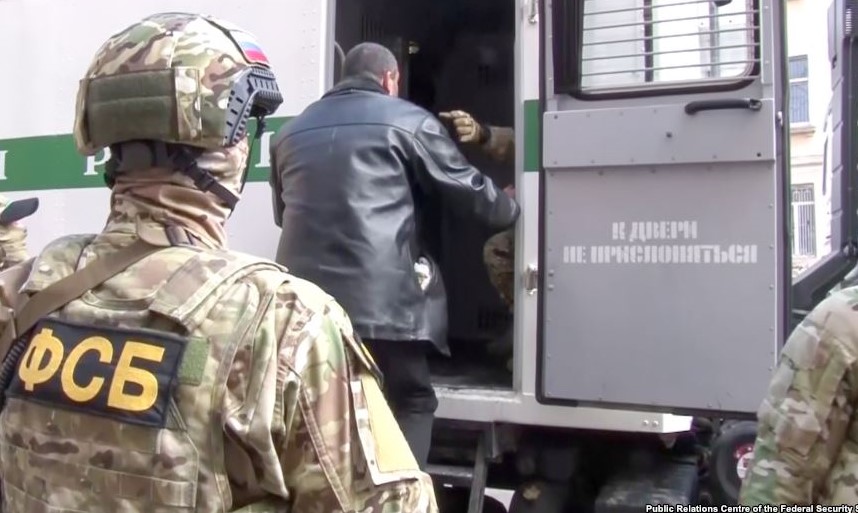 Russia has illegally taken the 23 Crimean Solidarity activists arrested on 27 and 28 March from occupied Crimea, without giving the men a chance to even contact their families.  The move was carried out in secret, and is almost certainly aimed at ensuring that the men do not receive proper legal defence and are isolated.

It is no wonder that analogies have been drawn since early morning on 27 March with the 1944 Deportation, since this is an evident attack on Crimean Tatars, carried out with immense brutality.

Journalist Anton Naumlyuk reported on 30 March that the 23 men have been separated and are being held in three different Rostov SIZO [remand prisons], as well as SIZO in Shakhty and Taganrog.  In one of the Rostov SIZO, he says, they have vacated cells in the special block, in order to hold the men in isolation.

There is conflicting information as to whether the FSB has detained  Edem Yayachikov, the 24th Crimean Solidarity activist who was not at home when the FSB and other masked and armed enforcement officers burst into 25 or more homes on the outskirts of Simferopol on 27 March.

It may well be no coincidence that Russia has, for the second time in less than six months, taken 24 Ukrainians prisoner.  The 24 prisoners of war seized after Russia attacked three Ukrainian naval boats near Crimea on 25 November 2018 were also taken to Russia quickly and in secret.  Their move came after an unprecedented outpouring of support for them from ordinary Crimeans.

The armed searches and arrests on 27 and 28 of March signalled a sharp escalation in Russia’s attack on Crimean Tatars and its offensive against the Crimean Solidarity civic initiative which helps political prisoners and their families, as well as publicising acts of repression.  Not one of the lawyers who sped to the men’s aid was admitted to the homes where armed searches were underway.  Both during these arrests, and those on 14 February, there were reports of so-called ‘prohibited literature’ having been planted, and the FSB clearly didn’t want lawyers getting in their way.

The defence and general support that Crimean lawyers and activists linked with Crimean Solidarity have provided for political prisoners have, in general, made the FSB’s life more difficult in occupied Crimea.  While powerless to prevent huge politically motivated sentences, they have served to highlight the monstrous nature of the charges and the fabrication of evidence, use of torture and other abuses common in such cases.

This is probably the reason why the FSB are resorting to both planting ‘prohibited literature’ to ‘prove’ the charges of involvement in the peaceful pan-Islamist Hizb ut-Tahrir which is legal in Ukraine (and most countries).

It is surely also why three Crimean Tatar lawyers have already faced varying degrees of persecution, with Emil Kurbedinov subjected to two terms of administrative arrest and almost stripped of his right to practise.  One of the aims is clearly to intimidate other lawyers and make them frightened of defending political prisoners.  That has not, thus far, worked, however it will undoubtedly be difficult to find lawyers for the 24 new political prisoners and the fact that all the men will be in Russia can only further obstruct their right to defence.

These new arrests are a frightening escalation in repression and demonstrate that Russia is no longer even trying to pretend that this is not an open offensive against those who speak out about its rights violations and, quite simply, against Crimean Tatars.

Each of the 24 men has been active in Crimean Solidarity efforts to help political prisoners and their families and / or in attending court hearings and reporting rights violations.