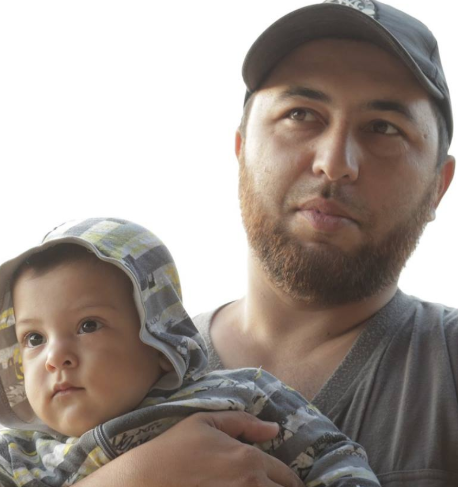 Osman Arifmemetov was one of the first civic journalists in occupied Crimea and there is every reason to believe that his arrest and imprisonment are the direct result of his tireless work in reporting on the ever-increasing number of armed searches, arrests and politically-motivated ‘trials’ since 2014.

Through its arrests, on 27-28 March 2019, of  Arifmemetov and 22 other Crimean Tatar activists, most of them involved in the Crimean Solidarity civic initiative, Russia was hardly concealing the political motivation behind the persecution.  Nor had it earlier, in February 2017, when Arifmemetov and other Crimean Solidarity activists were jailed for five days merely for standing and streaming information about the latest armed search of a Crimean Tatar home.

There are numerous reasons why Arifmemetov himself, and Crimean Solidarity as a whole, have annoyed the occupation regime and the FSB.  It was Arifmemetov who, on March 29, 2017, ran after the blue Volkswagen minivan into which masked men in camouflage gear had forced another activist, Belyal Adilov after seizing him while he stood outside the High Court, reading a prayer for the political prisoners on trial.  There have been many abductions and enforced disappearances since Russia’s annexation of Crimea, and there was every reason for Arifmemetov to want to video the minivan and  to ensure that the apparent abductors’ movements were widely publicized.

That publicity certainly protected Adilov from any threat to his life, however it was only several hours later that he was able to phone his family and tell them that he was being held at the Investigative Committee. Adilov was subsequently prosecuted and fined for words that the de facto police decided to treat as ‘threatening’ them.

Arifmemetov was not at home on 27 March 2019 when armed and masked enforcement officers burst into his home and those of 23 other Crimean Tatars, most of whom are Crimean Solidarity activists and devout Muslims.  He, fellow Crimean Solidarity civic journalist Remzi Bekirov and activist Vladlen Abdulkadyrov were seized in a café late in the evening on 27 March and beaten so savagely that Arifmemetov briefly lost consciousness.  They were then taken to a forest where they were again beaten, before being transported for six hours, handcuffed and with their arms behind their back.

The charges brought against Arifmemetov and the others are under Russia’s ‘terrorism’ legislation and can sound alarming.  They are, in fact, based solely on unproven allegations of involvement in Hizb ut-Tahrir, a peaceful, pan-Islamist party which is legal in Ukraine and which has never committed any act of terrorism anywhere.  This is the reason why all those convicted on such charges are recognized as political prisoners by the authoritative Memorial Human Rights Centre.  There are additional reasons for condemning such application in Crimea of a flawed Russian Supreme Court ruling since Russia is in breach of international law by applying its legislation on occupied territory.

All of such arrests of law-abiding Ukrainian Muslims, who have not committed any crime, are invariably widely reported by the Russian and Russian-controlled media as seizures of ‘dangerous terrorists’.

Arifmemetov is charged with ‘involvement in a Hizb ut-Tahrir cell’ under Article 205.5 § 2 of Russia’s criminal code, for which he faces a sentence of between 10 and 20 years.  All previous Hizb ut-Tahrir ‘trials’ of Crimean Muslims have been based on flawed ‘expert assessments’, highly dubious ‘secret witnesses’ and falsified evidence.  With respect to rigged evidence, lawyers were prevented from being present at all armed searches carried out on 27 March and there were reports that the FSB officers had claimed to ‘find’ prohibited literature’ that they had, in fact, brought with them.

Osman Arifmemetov is 34 (b. 28.08.1985) and a maths and information science teacher by profession.  He earned a living giving lessons and writing computer programs.  He is one of the main civic journalists reporting for Crimean Solidarity on searches, arrests and court hearings.

Please write to Osman and to all the other Crimean Tatar activists arrested on 27 March, who have just had their detention extended in closed court hearings in Russia