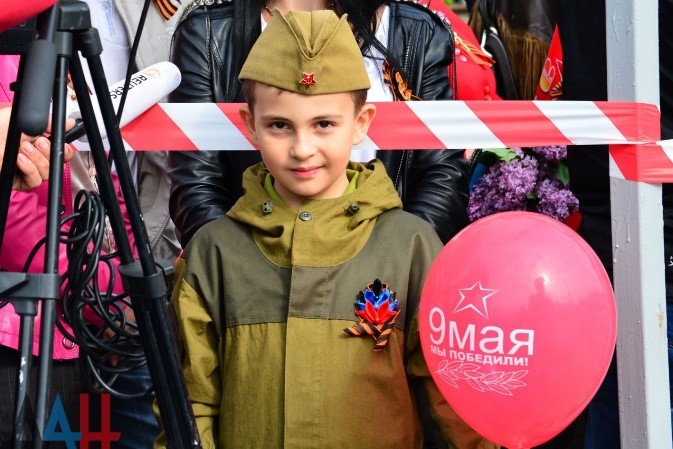 The self-proclaimed ‘Donetsk people’s republic’ [DPR] has announced the formation of a militarized ‘army’ for children and young people.  Like most developments in this Russian-controlled pseudo-republic, this is essentially a copy of the Russian ‘Yunarmia’ or ‘Youth Army’ which is being used to militarize childhood in both Russia and occupied Crimea.

The so-called military-patriotic movement ‘Molodaya Gvardiya – Yunarmia’ is different from the Russian Yunarmia in that it will, rather bizarrely, take both children from 8 years to adults up till the age of 35.  At least for the moment, it seems less overtly linked with the military than its Russian counterpart.  According to the ‘DPR information agency’, the youth army was formally created on 5 April 2019, and will be headed by the deputy head of the ‘department of military-patriotic upbringing of the so-called ministry of youth, sport and tourism, Viktor Pudak.

That this is no innocent club for ‘military-patriotic sports’ was clear from the speech on 29 March from Edward Basurin, one of the few original Donetsk militants to have not  been killed or imprisoned by his comrades.  On 29 March, Basurin, who is now called the deputy head of the ‘people’s militia’, asserted that “it is important to not only bring youth up even more patriotically, but to fight against the falsification of history which the mendacious Kyiv authorities are currently involved in”.

He claimed that “the military” are regularly asked by locals to create “a single centre for bringing up the new generation in military-patriotic traditions.  This ‘Youth Army’, he asserts, will “include both physical and intellectual development, and also form correct life views in the broad sense of the word”.

It remains to be seen how closely this ‘DPR’ formation apes Russia’s Yunarmia which is  an ‘army’ for children from 8 to 18, but which is also supposedly aimed at ‘military-patriotic upbringing’ and undoubtedly about ensuring ‘correct views’.  All kinds of incentives and pressure are currently being applied to achieve the Russian Defence Ministry’s goal of getting one million child and teenager ‘recruits’ by 2020.

The Defence Ministry described the Youth Army, created late in 2015, as having emerged “at the initiative” of the Minister of Defence, Sergei Shoigu and as being “supported by” Russia’s President Vladimir Putin.  It seems likely, in fact, that the ‘army’ was always planned as part of the ‘Russian Movement of School Students’, created by presidential decree on October 2015.

The movement is one of many methods being used to illegally militarize childhood in occupied Crimea, glorify war and indoctrinate children.  All events in which children are taught how to put together rifles, etc., are also accompanied by tests on Russian history and a focus on developing ‘patriotism’, with this clearly presented as being linked with so-called ‘Russian values’.

There is every reason to expect the same in occupied Donbas, especially since Ukrainian children from the so-called ‘republics’ have, on many occasions, been sent to such ‘military-patriotic camps’ in Russia.

Russian neo-Nazis Alexei Milchakov and Yan Petrovsky, both of whom are wanted in Ukraine for war crimes, have taken part in such camps training children and young people how to fight and kill, Milchakov in 2015, Petrovsky in both 2015 and 2016.  There are reports that Milchakov has found new scope for his notorious sadism in Syria.

The ‘II Dmitry Donskoy International Military-Patriotic Camp’ held in September 2016 in the Moscow region  September 2016 in the Moscow region made little pretence about the recruitment nature of the exercise.  Children and young people from the Donetsk and Luhansk oblasts were involved, as well as kids from Belarus.  Those who finished  the training could, if they wished, take part in “humanitarian aid to Donbas”, as well as “helping the local police fight street crime”.

Less detail is available about other camps, in which Donbas children are known to have been involved, but the general course towards militarization and inculcation of ‘correct views’ seems clear.