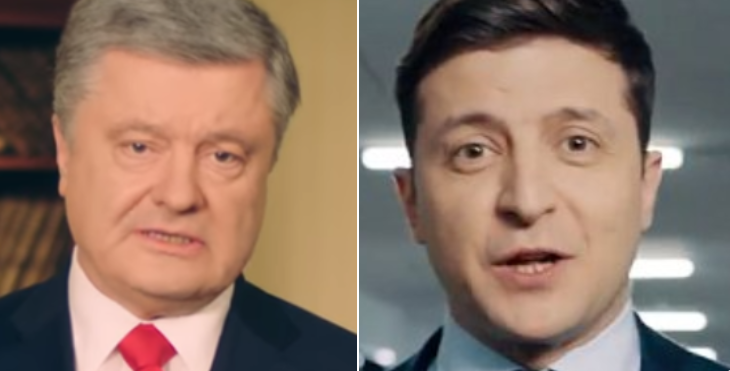 Calls are mounting for presidential candidates Petro Poroshenko and Volodymyr Zelensky to conduct proper debates and to fully reveal their programs now, before the second round of voting on 21 April.  Several prominent Ukrainians have expressed concern that ‘form is replacing content’, with at least one of the candidates finding it convenient to remain an ‘enigma’ – a “colouring book” for voters to colour as they prefer.

On 10 April, a number of well-known media NGOs issued a joint appeal to both candidates to take part in a television debate on 19 April at the studios of the National Public TV and Radio Broadcasting Company.  It is precisely such publicly funded debates that are envisaged in Article 62 of Ukraine’s Law on the Presidential Elections. “We can welcome a show at the Olympiysky Stadium as one of the possible forms of campaigning by the candidates.  However this cannot replace the official debates, run according to clearly defined rules for their procedure.

This will be the last chance for candidates to set out their plans for the future and to present a substantive view of the country’s development. We consider any arguments given to justify not taking part in official debates to be unacceptable for a democratic country”, the media organizations stress.

It was Zelensky who announced that he would take part in a debate with Poroshenko, but demanded that this should be at the Olympiysky Stadium in Kyiv. It seems likely that he was expecting Poroshenko to refuse.  When the latter agreed, Zelensky then stipulated that the debate should be on 19 April.  This is just two days before the elections, and on the eve of the day when the media are obliged to remain silent about the elections, and would therefore not be able to subject the candidates’ statements to any analysis.

Shortly after the candidates exchanged video clips (!) regarding a debate at the stadium, Svyatoslav Vakarchuk, lead vocalist of the very popular rock band Okean Elzy, issued his appeal to the voters to not let “content be replaced by form”.  He called on them to demand specific answers to questions about how they see Ukraine in the next five years and how they plan to implement their plans to achieve this.  He, as a voter, needs to know how each candidate will ensure rule of law in Ukraine, reform the judiciary; how they will achieve the release of political prisoners and prisoners of war and ensure an end to the occupation of Crimea and Donbas.

As reported earlier, of all the programs of presidential candidates during the first round, Poroshenko’s has the most detail about occupied Crimea.  His words, however, will be judged as well by his record over the past five years.  Zelensky did not even mention Crimea in his program, and he has no political track record to enable conclusions to be drawn. He has also made it clear that he sees no end to Russian occupation without a change in regime in Russia.

During a press conference on 10 April, entitled “Candidate, tell us whose Crimea is”, the civic movement #Liberate Crimea articulated a number of hard-hitting questions to both candidates, including on protecting human rights in Crimea, given the mounting repression under Russian occupation.

These and other questions need to be asked, and the answers or failure to answer publicly recorded.

Members of Zelensky’s team have provided Liga.net with a list of 10 steps that would be taken if he wins.  Some, like removing deputy immunity, are, in fact, only steps that he could initiate, with the ultimate decision lying with parliament.  This is the reason that most politicians have campaigned with this in their program for years, without any significant progress having been made.  Many other steps are very vague, and it would be useful to hear more detail.  The same is doubtless true of many of the promises Poroshenko is making.

In an article published by Ukrainska Pravda, journalist and political commentator Pavel Kazarin suggested that Zelensky is short on detail because it suits him to get voters to come up with their own image of him.  This way, he says, you have people with apparently irreconcilable positions supporting him.  He cites a Razumkov Centre survey before the first round of voting which showed that , for example, that Zelensky enjoyed support both from people who support joining NATO, and those who want to remain outside it; from those who support the Ukrainian language and those who want equal rights for all languages in Ukraine, etc.  Although there are such divergent views among Poroshenko supporters, there is much greater homogeneity of views on fundamental issues, such as the two mentioned here.

Kazarin believes that the Zelensky team is quite deliberately avoiding answering questions.  Zelensky, he says, has from the outset not been interested in finding a target audience so as to attract as many voters as possible.

“Judging by the first round, this could not have been a more winning strategy. The candidate is like a colouring-in book for whom each voter chooses the felt-tip pens.”

Kazarin, however, comes to the same point as the media organizations, Vakarchuk and many others.  Even if we assume that people will be voting for the lesser of two evils, they still need to know what a candidate is proposing in order to determine which is the greater, which the lesser evil. It is here, for example, that voters may decide that one candidate’s position is unacceptable and choose the other.  For example, one voter might feel that banning Russian content is linked with Ukraine’s security, while another would see it as alarming censorship.

Making your position clear will, of necessity, mean that you lose voters.  Kazarin believes it possible that for this very reason, Zelensky’s team is hoping to gain from people being tired of the current President and remain largely silent about policies before the second round.

Kazarin reaches the same point: “If you are so confident in your candidate, why not persuade him to speak with us all?”   A five-year presidential term is no colouring-in book.