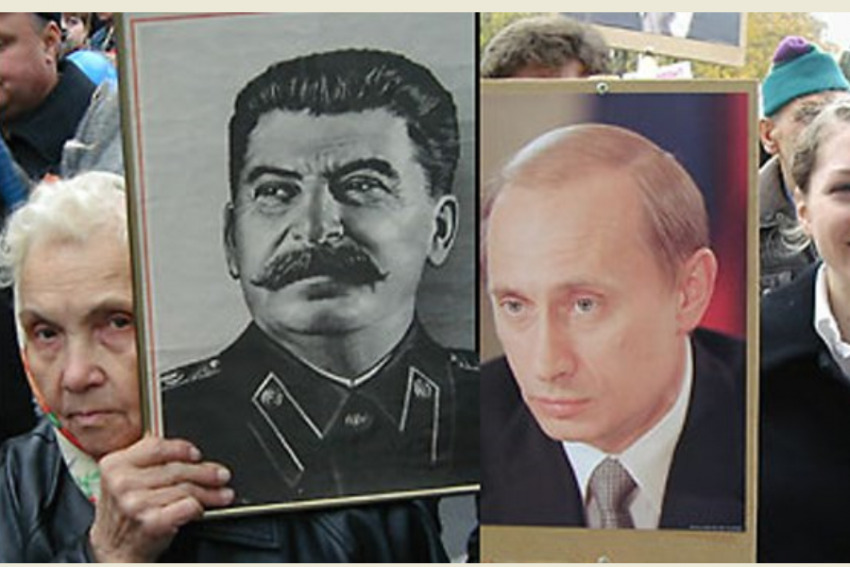 The Levada Centre has been carrying out surveys into attitudes to Stalin and other historical figures since 2001, and says that their poll in March 2019 showed a record level of approval for the dictator.  While the number of those who spoke of ‘admiration’ for Stalin had remained fairly stable at 4%, there had been a huge increase (from 27% in 2001 to 41% now) in the numbers who ‘respected’ Stalin.  Together with the largely unchanged percentage of Russians who view the dictator ‘with liking’, this means that 51% have a positive attitude to him.

Equally disturbing is the sharp rise in the percentage of Russians willing to justify the number of victims of the Stalin era.  This has risen from 27% in 2008 to almost half the population (46%) in 2019.

The major change seems to have come from 2015, with the number of Russians since then with a neutral or negative attitude to Stalin, or answering that they don’t know, rising.  The Levada Centre notes that this is in contrast to Ukraine, where the attitude to Stalin and his role in history is becoming more negative.  In a survey carried out in February 2016, together with the Kyiv International Institute of Sociology,  a negative attitude to Stalin was found to dominate in Ukraine, with more than twice as many people having a negative than a positive attitude (38% against 17%).  People are only allowed to give one answer, although there are around three possible positive, and three negative answers.  Nonetheless, it is indicative that on 3% of the Russian respondents described their attitude to Stalin as ‘revulsion, hatred’.  This was against 17% in Ukraine.

It should, perhaps, be noted that the survey in Ukraine could not be carried out on occupied territory in Donbas, and occupied Crimea.  There are certainly indicators that  the same kind of glorification as seen in Russia can now be found in Crimea, and, probably, in occupied Donbas.  It is for sociologists to determine whether their inclusion in 2016 would have influenced the result in Ukraine.

Holodomor [the artificially-caused Famine of 1932-32] in Ukraine, the 1944 Deportation of the entire Crimean Tatar people and the atrocities committed by the NKVD after the Soviet Union invaded Western Ukraine (then part of Poland) on 17 September 1939 may be more imprinted on Ukrainians’ memory than Stalin’s crimes in Russia.  The reason may also, however, be in what Russians are seeing on television and what children are studying in schools.

In marking the opening of a museum and bust of Stalin in the Tver oblast in June 2015, Vladimir Medinsky, Russia’s Culture Minister, wrote an article for Izvestia, entitled ‘We must stop laying our problems on Stalin’. In it he spoke of the place the dictator holds in the country’s history and historical memory.  Although he did not precisely justify Stalin’s crimes, it would be most unlikely that readers not intimately familiar with the scale of the crimes involved would have understood what kind of mass murderer he was talking about.  He wrote, for example, about Stalin “as a state figure, commensurate with the gigantic scale of our terrible and equivocal era. His achievements, his mistakes and failures are our historical experience.”

He claimed that there should be no secrets about the past, yet it is specifically the regime of Russian President Vladimir Putin that in 2015 put the archives of all the secret police [officially ’state security’] bodies (Cheka, NKVD, KGB, etc.) under lock and key for another 30 years.

One Russian (Vladimir Luzgin) has been prosecuted for reposting a text which accurately stated that the Soviet Union invaded Poland together with the Nazis in 1939.  Two Russian historians – Yuri Dmitriev and Sergei Koltyrin – who have devoted decades to revealing the crimes and the mass graves of Stalin’s Terror are in prison on fabricated charges.  Dmitriev’s arrest may in fact be linked with efforts to deny that the mass graves at Sandarmokh in Karelia, a place of pilgrimage for many Ukrainians, Poles and other nationalities, as well as for many Russians, are of victims of the Terror.

A recent survey by VCIOM found that almost half of young people, aged from 18 to 24 had never heard of the repression of the Soviet times.

This is hardly surprising.  In an address to history teachers in June 2007, Putin expressed concern about the presentation of Russian history, noting that “up till quite recently we read things in textbooks that made our hair stand on end…”  Putin was commenting on certain ‘positive moves’ like, for example, a manual for teachers in which the author, Alexander Filippov described Stalin as “one of the most successful leaders of the USSR”.

Monuments to Stalin have been appearing over the last few years, as well as highly doctored information about Stalin’s role in the Second World War.  In 2017, Putin appointed Olga Vasilyeva  Education Minister.  She is known for an extremely specific view on Stalin and for remarks denying the number of his victims.  The reappearance of portraits and busts of Stalin reached a crescendo in 2015 around events marking the 70th anniversary of the end of World War II.  At least in Novosibirsk, there are also a huge number of streets named after Stalin.

If young people are not learning about the crimes against humanity which Stalin and his regime were guilty of, and the television program is full of programs glorifying everything about the Second World War and treating security service officers as heroes, it is not surprising that in 2017 Russians named first Stalin, then Putin, as ‘the most outstanding figures in history’.