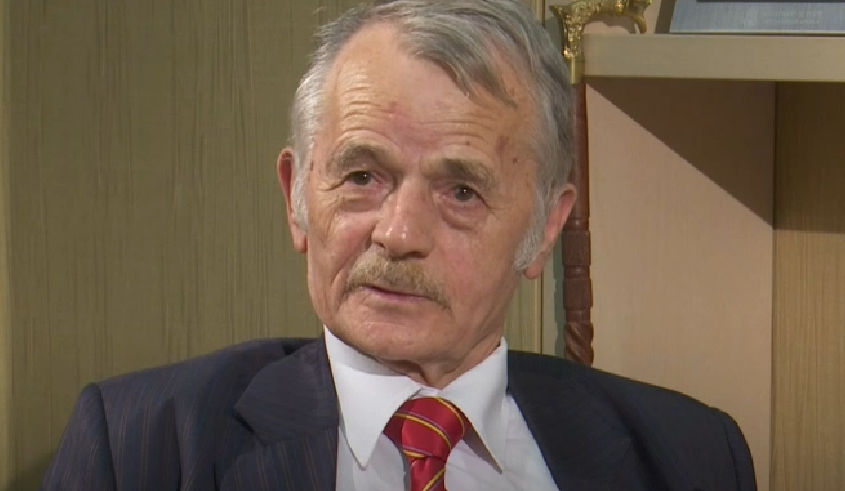 The 5-year ban on entering his native Crimea that Russia imposed on veteran Crimean Tatar leader Mustafa Dzhemilev soon after invading his homeland came to an end on 19 April.  There is, however, no question of his being able to return, with Russia having since placed him on their ‘sanctions list’, as well as bringing various criminal charges against him. Russia’s ban in April 2014 was the first declaration of war against the Crimean Tatars and it is typical that it should have begun with Mustafa Dzhemilev.

Now 75, Dzhemilev was six months old when the entire Crimean Tatar people were deported from Crimea, a crime now recognized by Ukraine as an act of genocide.  He spent 15 years in Soviet labour camps, persecuted for his leading role in the struggle for the right of the Crimean Tatars to return to their homeland and for human rights generally.

He has for many decades enjoyed international renown for his courage and unwavering commitment to non-violent means of protest.  He was, for all those reasons, hated by the Soviet regime, and swiftly became enemy No. 1 of the Russian occupiers after the invasion and annexation of Crimea in the Spring of 2014.

The Kremlin had tried to woo him, but discovered rapidly enough that neither he, nor the Mejlis, or representative assembly, of the Crimean Tatar Mejlis, which he headed until 2013, would accept Russian occupation.

Dzhemilev is also a long-standing Ukrainian MP and was in Kyiv when Russian soldiers without insignia seized control in Crimea. He returned to Simferopol for the first time after that on 19 April 2014.  One of his actions after reaching the Mejlis  offices in Simferopol was to order that the Ukrainian flag be reinstated over the building in its rightful place next to the Crimean Tatar flag.  By 22 April,  Dzhemilev had been handed a scrappy document which called him a ‘foreign national’, as a citizen of Ukraine, and banned him from entering Crimea under Russian occupation until April 19, 2019.  Both Moscow and the leaders it installed in Crimea cynically denied any knowledge of this ban for the next 10 days, until it was enforced on 2 May.

Within months,  Russia had also banned the current Head of the Mejlis, Refat Chubarov from his homeland, and had begun the repressive measures against the Mejlis which were to result in the politically-motivated imprisonment of Deputy Mejlis leader Akhtem Chiygoz and the ban on the Mejlis, which is the self-governing body of the main indigenous people of Crimea.

Russia’s measures against Dzhemilev became particularly deranged after he and Chubarov initiated the Civic Blockade of Crimea, presenting specific human rights demands, including the release of all political prisoners.

Russia began using its propaganda media to push the absurd claim that Dzhemliev was ‘recruiting fighters for the so-called Islamic State’.  Then in January 2016, it became clear that criminal charges had been laid against Dzhemilev and an arrest warrant issued against a man whom Russia had itself banned from his homeland.

According to Dzhemilev’s lawyer, Dzhemil Temishev, there were three charges, including, most incredibly, a charge over the events on 3 May 2014.  It was asserted that on that day, Dzhemilev had, in Russian post-annexation Newspeak,  “carrying out his criminal intention, aimed at the unlawful crossing of the State border of the Russian Federation, while being fully aware of the established procedure for crossing the State border of the Russian Federation, acting deliberately in violation of the Federal Law of 15.08.1996 , realizing the public danger and unlawful nature of his actions, envisaging the inevitability of publicly dangerous consequences in the form of violation of the established order in the Russian Federation ….”.  He had, in short, endeavoured to cross the administrative border from mainland Ukraine to Crimea which is internationally recognized as part of Ukraine, but which Russia is illegally occupying (more details here).

The Kremlin is probably right in seeing Mustafa Dzhemilev as one of its most implacable enemies, one who has said that “dying before Crimea is liberated would be desertion”.  It also doubtless understands that Dzhemilev is a danger, one that its ban and criminal charges are powerless to fight.

When Dzhemilev tells the world that the level of lawlessness under Russian occupation is worse even than that under the Soviet totalitarian regime, he speaks with experience and with immense moral authority. That authority, and his tireless determination, have also been invaluable in ensuring that the international community does not succumb to Russian pressure and turn away from Ukraine.

Russia’s ban on Dzhemilev was, of course, upheld by Russian courts, who chose to believe that the Crimean Tatar leader was “a threat to national security”.  The ban is now awaiting assessment by the European Court of Human Rights.