The day Russia lost Odesa and launched a lethal propaganda lie used to kill in DonbasDramatic Acquittals in Trial over Odesa 2 May 2014 RiotsPutin and Russia Today continue incitement to kill through lies about non-existent Odesa ‘massacre’Ukraine faces human rights court hammering over investigation of Odesa 2 May TragedyOdesa Smoking Gun Leads Directly to Moscow"US guilty of genocide": Kremlin supports anti-Maidan festival with links to the German far rightOdesa 2 May Suspect: We were financed by MoscowVital Probe of Odesa May 2 Tragedy stymied because of questions answered?Movement at last on Odesa 2 May investigationRussia Today, or why Odesa May 2 is different from BaltimoreOdesa May 2 Investigation: A Failed Test for Ukrainian JusticeMore Evidence against Incendiary Lies about Odesa 2 MayContinuing Obstruction of Odessa May 2 InvestigationPropaganda that KillsOdessa May 2 trial turns into farce as Russia continues ‘massacre’ propagandaBad Start to Crucial Odessa May 2 TrialsRussia’s New Odessa FileOdesa "Massacre" Propaganda vs. the FactsDangerous silence over police role in Odessa May 2 eventsWithout Double Standards
• Topics / Politics and human rights
• Topics / The right to life 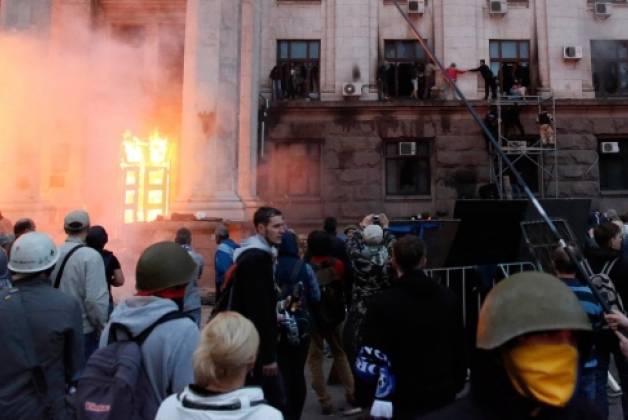 It is five years since the riots and fire in Odesa on 2 May 2014, in which 48 people lost their lives.  The events that triggered the riots were probably part of a plan to see Odesa plunge into the same bloody violence as the Donetsk and Luhansk oblasts, a plan involving Russian President Vladimir Putin’s senior adviser, Sergei Glazyev.  The plan failed, and Russia turned instead to creating a toxic propaganda narrative about a fictitious ‘massacre’.  It is a narrative that Russia has spent a lot of money fostering, but one that the Ukrainian authorities have failed to properly counter through their unwillingness to adequately investigate and ensure accountability for the events that day.

The following is based on considerable research carried out by the 2 May Group, a respected bipartisan initiative formed by journalists, scientists and civic activists.  Their findings, presented in Russian, English and in German) were also backed by  international experts from the Council of Europe’s International Advisory Panel.

All confirm that the earlier disturbances arose after a group of pro-Russian anti-Maidan activists from the recently formed (and seemingly Russian-funded) Odesskaya Druzhyna attacked a peaceful march for Ukrainian unity.  The violence escalated, with weapons and firearms used by both sides, and spun out of control particularly after news of the first death – that of Ihor Ivanov, a Maidan activist.  Six people were killed, four of them anti-Maidan activists.

Pro-unity activists then moved to Kulikovo Pole Square intending to destroy an anti-Maidan tent camp, where they were shot at by activists from inside and on the roof of the Trade Union building.

Vladislav Balinsky, a biochemist and member of the 2 May Group, was one of the first people to enter the Trade Union building after the fire. He has provided evidence suggesting that barricades had been set up inside the building just before the attack, with large amounts of Molotov cocktails and inflammatory liquid for them. He and the Group have also amassed proof that various methods, including deception, were used to get around 380 people into the Trade Union building (more details here).

Most, if not all of the 42 deaths from the Trade Union building fire would have been averted had the fire brigade not taken forty minutes to arrive, despite repeated calls.

Judging by the Glazyev tapes – conversations intercepted between Putin’s senior advisor and various individuals, including some in Odesa, one of the plans which Glazyev was responsible for financing involved provoking supposed ‘people’s uprisings’ in various parts of south-eastern Ukraine (details here).

It is widely believed that the shocking events on 2 May 2014 pulled Odesa back from the brink of the same bloody war as in Donbas.

Effectively by that same evening, Russian propaganda media had begun presenting the events in a highly distorted fashion.  The claim then, and with few variations since, was that ‘Ukrainian radicals’ had caused the disturbances, and then driven people into the Trade Union House on Kulikovo Pole and deliberately set it alight.

These claims have also been taken up by western communist or far-right parties which Russia has cultivated, and by some others who assume that the lack of confirmation of a ‘massacre’ is due to a NATO or similar ‘cover-up’.

Given Putin’s repetition of the same lies, and an ‘exhibition’, with alleged ‘victims’, which has travelled around Europe, this is no mere media sensationalism.

From the outset, the Russian and pro-Russian media, presented a deliberately distorted impression, especially of events around the fire.  They never showed or mentioned the people shooting at pro-Ukrainian activists from the roof, nor the desperate attempts by those same activists to drag scaffolding to the building and rescue the people trapped inside.  All coverage was aimed at creating the erroneous impression that the pro-unity activists had driven their opponents into a building and set it alight.

There were perhaps more outrageous lies that Russian state-controlled media told, but this is surely the most toxic and dangerous.  It is known, for example, that lies about Odesa prompted many young men to go and fight (sometimes die) in Donbas.

There can be no question that this was not deliberate.  This is seen most clearly when ‘Russia Today’ or other state-funded media apparently give ‘coverage’ to the UN Human Rights Commissioner’s Monitoring Mission June 2014 report of the above-mentioned Council of Europe’s International Advisory Panel’s report.  The Russian reports mention criticism of the Ukrainian prosecutor’s office or police over the investigation, while assiduously ignoring the parts of the reports which totally debunk the ‘massacre’ claims.

From the outset there were damming things to say about the Ukrainian investigation into the disturbances and the fire, and the situation has only got worse.  In its most recent quarterly report on Ukraine, the Office of the UN Human Rights Commissioner noted that “As of 15 February 2019, almost five years after the events, which led to the deaths of 48 people, none of the state officials have been held accountable. On 16 January 2019, the court of appeals for Odesa region reversed the decision of the Kyivskyi district court of Odesa to return to the prosecutor’s office the indictment against three State Emergency Service officials accused of negligence and ruled to start the trial. OHCHR notes no progress in the case against the only ‘pro-unity’ activist accused of killing: two hearings were adjourned due to the court’s failure to select a jury panel and disruption of the proceedings by ‘pro-unity’ supporters. (77-79). The report goes on to explain one of the main reasons for the lack of progress into the trial of the pro-unity activist, Serhiy Khodiyak, namely obstruction by Khodiyak supporters (many of whom are from Right Sector or other far-right groups).  It is, in fact, possible that the case would in any case collapse because of the lack of direct evidence linking Khodiyak’s shooting to a particular death.  That is likely to be forgotten due to the shocking obstruction of his trial, and the fact that he was released from custody almost immediately, unlike many pro-Russian activists who remained in detention on less serious charges.

In September 2017, 20 pro-Russian activists were acquitted after many of them had spent very long periods in detention on charges that had been slammed by the both the 2 May Group and the International Advisory Commission.

Two of the men - Ukrainian Serhiy Dolzhenkov and Russian Yevgeny Mefedov – were immediately re-arrested, and are still in detention, facing charges under Article 110 of the Criminal Code – encroaching on Ukraine’s territorial integrity.

The latter charge may make some sense, unlike the vague charges that the 20 men had faced, of involvement in riots which could just as well have been laid against a huge number of other people that day.

There was no ‘massacre’ on 2 May 2014, but there were very bad mistakes made.  There is also evidence of individuals within the police force or prosecutor’s service having helped those who should have faced the most serious of charges to escape, been involved in providing weapons, etc.

The above-mentioned IAP report noted evidence suggesting some police complicity, as well as omissions, and the fatal delay of the emergency services, and advised that the investigation needed to be carried out by a body independent of the Interior Ministry. Those recommendations were ignored.

While some of the officials fled almost immediately, it seems likely that Volodymyr Bodelan was allowed to ‘disappear’ in 2016.  At the time of the tragedy, he was the head of the emergency services who took more than 40 minutes to arrive, despite repeated and increasingly urgent calls from people in the building or nearby.  There is now evident obstruction of the trial of his subordinates as well.

The right to life, enshrined in Article 2 of the European Convention on Human Rights demands both that the authorities protect human life and that they effectively investigate cases where life was lost.

There is at least one application before the European Court of Human Rights from the mother of a young man who died in the Trade Union building, and that number is likely to rise.

In a blistering statement issued on 17 March 2017, the 2 May Group wrote: Ukraine “did not defend its citizens during the disturbances in the centre of Odesa, did not take measures to save them during the fire in the Trade Union House.  The state is not carrying out a proper investigation into the crimes committed on that tragic day and is not safeguard the law during court hearings.”

Two more years have now been lost without any progress.