Less than a quarter of Russians believe that military parades and processions are an appropriate way to mark Victory Day, yet thousands of children, even of pre-school age, have been decked out in military uniforms and sent onto the streets for elaborate 9 May events.  The smallest children have no idea what is going on, but the aim with older kids is very clearly to inculcate a highly specific form of ‘patriotism’ and glorification of war.  All of this is particularly aggressive and dangerous in occupied Crimea, where Russia is using supposed ‘patriotic education’ as a method of strengthening its grip on illegally occupied Crimea.

In Russian Pyatigorsk, 500 pre-school children were dressed up as fighter-pilots, infantrymen, tank-drivers, naval seamen and nurses for a march to the Eternal Flame. As the head of the local Education Department, Natalya Vasyutina, put it: “The earlier patriotic upbringing begins, the healthier a society”. The official Pyatigorsk website makes it quite clear that this was no spontaneous decision within a particular kindergarten.  What it does not explain is who paid for all of the children’s ‘uniforms’ since there can be no question of parents having been able to refuse to let their children participate. 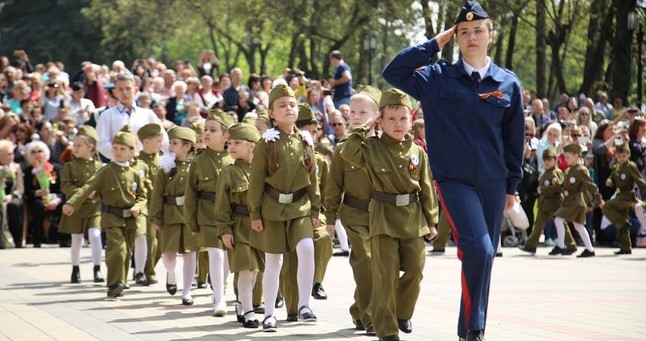 If in the last two or three years military uniforms for children had seemed like a tasteless fashion for the more affluent, vast amounts of money have now evidently been expended.  This is at a time when the number of schools and hospitals in Russia has fallen sharply and the level of poverty is rising.

You won’t learn about that from the state-controlled media, however, and Yevgeny Grekov, an activist from Open Russia has just been fined for a Facebook post in which he wrote about the shortage of kindergartens and schools in the Krasnodar region.

At least in Crimea, the hype around Victory Day is not significantly greater than the general level of militarization of children under Russian occupation.  There is particularly active and not necessarily voluntary ‘recruitment’ into Yunarmia, however Russia is also seeking to promote its army in Crimea, and there are constantly events where children are shown weapons, tanks, etc..  At some of the events, especially those linked with Yunarmia, they get the chance to load and unload or even fire from the weapons.

Krym.Realii has put together a chilling video in which you see very small children learning how to aim a rifle, taking part in drills and simulating partisan action, with some children shooting, others being shot.  Especially for children from poorer families, this gives access to sports and other facilities that they would not otherwise have, and will almost certainly be seen as fun.

This is undoubtedly not the main aim.  The video begins with a young lad from Sevastopol, saying “We want to defend our homeland so that in our Russia nothing ever happened”.  A young girl, ‘recruited’ into Yunarmia, also says that while it’s all just fun activities now, she does hope to “defend her homeland” in the future.

It is obvious why the current regime in Russia is expending so much money and effort on indoctrinating children.  Many of them will simply not have known or, at least, not remember the reality before Russia’s invasion and annexation.  At that age, distorting children’s ideas about who is a hero, who a villain, and what exactly they should be “defending” is dangerously easy.

It is not, in fact, at all clear that the huge number of kids now joining Yunarmia are doing so voluntarily, just as it is unlikely that the children dressing up as fighter pilots or partisans are marching because they want to.  A document dated 29 January 2019 and widely circulated on social media leaves little doubt that any officers who did not get their children involved in this ‘army’ would face problems.  This ‘telegram’, signed by Alexander Manakov, acting deputy commander on military-patriotic work of the Eastern Military District, asks that the absence of the children of officers from the ranks of Yunarmia “be viewed as a lack of understanding by the military officers of the foundations of state policy regarding the patriotic upbringing of citizens”.

Yunarmia was created on 29 October 2015 at the initiative of Defence Minister Sergei Shoigu, though it took several months before the public became aware of this children’s ‘military-patriotic formation’.  This children’s army” clearly received significant Defence Ministry support from the outset, with 76 regional branches having been opened within the first eight months. Yunarmia was itself reporting 140 thousand members in 2016, and that figure is now reportedly around half a million, with the plan being to double this by 2020.

Under Russian President Vladimir Putin, and especially since Russia’s annexation of Crimea, there has been a huge drive to glorify the Soviet ‘Great Patriotic War’ (from when the Nazis invaded their erstwhile ally on 22 June 1941 till 8 / 9 May 18).  In fact, the Levada Centre carried out a study recently and found that only 23 percent thought that Victory Day should be marked by parades, processions and similar, while 52% thought a more fitting way to mark the occasion was by showing concern for war veterans.   The latter receive something on 9 May, but many live in abject poverty.