Notorious judge awards ex-Yanukovych aide millions in damages from UkraineCrimean Resistance to Russian Aggression and Moscow’s Savage Revenge Russia uses same fake witnesses in multiple ‘trials’ of Crimean Tatar political prisoners Will anyone answer for the killings on Maidan?Belarusian Journalists Handed "Absurd" Prison Sentences For Live Coverage Of Anti-Government RallyMass armed searches for ‘prohibited books’ and arrests in Russian-occupied Crimea Russia reverts to worst Soviet times in reprisal sentence against historian of the Terror Yury DmitrievUkraine on brink of abetting Russia by destroying vital Crimean Tatar TV ATR Crimean Tatar political prisoners illegally taken to Russia in appalling torture conditions FSB use fake ‘secret witness’ in revenge trial of Crimean Tatar who exposed their methods of getting false testimony Izolyatsia: a Donetsk concentration camp too toxic even for Russia? PACE finalizes capitulation to Russia, while listing all reasons why this is appeasement New Russian offensive to deprive imprisoned Russian Historian of the Terror Yury Dmitriev of his lawyer Application practice of Article 109 of the Criminal Code of UkraineApplication practice of Article 110 of the Criminal Code of UkraineCrucial victory for Ukraine in ECHR case against Russia over Crimea Crimean Tatars sentenced to 18, 17 and 13 years for discussing their faith and Russian persecution 2020: There was no worse year in the realm of human rights after the Revolution of DignityMass detention of Crimean Tatars travelling to political trial in Russia A brief description of the KHPG strategic litigations in July–December 2020
• Topics / Politics and human rights 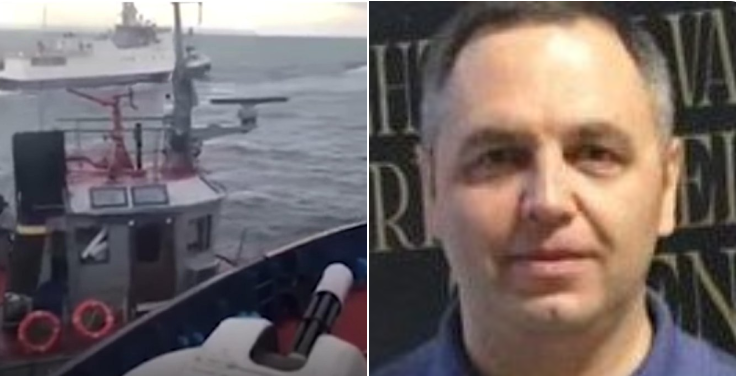 Ukraine’s State Bureau of Investigations has registered allegations of ‘state treason’ against former President Petro Poroshenko lodged by Andriy Portnov, a person who was close to ex-President in hiding Viktor Yanukovych.  The claim that Poroshenko essentially ‘provoked’ Russia’s attack on three naval boats in November 2018 is already startling.  It becomes quite surreal coming, as it does, from a person suspected of having tried to help  Russia’s operation to seize Crimea

Portnov, who was First Deputy Head of the Presidential Administration under Yanukovych, left Ukraine in 2014, living first in Russia, then in Vienna.  He clearly wanted maximum publicity for his return to Ukraine which was timed for the eve of Volodymyr Zelensky’s inauguration as President. For those fearing a return to the past under the new President, this was viewed as ‘proof’,  although there is no evidence that Zelensky had any active role in his return.

Portnov says that he organized armed “police officers” to guard him before returning, and feels safe.  He clearly believes that he has no need to fear prosecution, and this may well be the case, though not necessarily for want of grounds.

Among the ‘Glazyev tapes’, which Ukraine’s Security Service [SBU] made public, Sergei Glazyev, an adviser to Russian President Vladimir Putin, incriminates not only the Kremlin, but also Portnov.  During an intercepted call on 1 March 2014, Glazyev mentions a ‘resolution’ by the Crimean parliament which, he says, Portnov drew up.  The document is needed, he says, at the foreign level to make it clear that not all of Ukraine is behind the signing of the Association Agreement with the EU.

The Glazyev Tapes in general reveal Russia’s attempts to instigate supposed ‘people’s uprisings’ against the Ukrainian government, with Russia resorting to direct action only when these did not work. It was, for example, the Mejlis of the Crimean Tatar people and the huge demonstration they organized on 26 February 2014 that prevented Russia’s plan to push through an illegal decision on Crimea’s status which would have enabled Russia to not use its own troops.

It seems likely that the ‘resolution’ that Glazyev mentions was along the same lines.  If he was telling the truth, then this was drawn up by Portnov, who is a lawyer by profession.  While this alone would almost certainly not constitute sufficient evidence for prosecuting Portnov,  the behaviour might well be seen as containing elements of treason.

Now Portnov has come up with ‘treason’ allegations, with his being against Poroshenko.  His version of events is, in many ways, similar to the Kremlin’s, and it seems likely that the State Bureau of Investigations will not go much beyond registering the claim, and quickly checking the document presented.

Portnov has himself made his ‘report of crimes’ publicly available.  He refers to the events of 25 November 2018 when Russia attacked and seized three Ukrainian naval vessels near the Kerch Strait, and took the crew of 24 men prisoner.

Before dealing with Portnov’s highly specific interpretation of the events, it is worth noting that in its first quarterly report after them, the Office of the UN High Commissioner for Human Rights clearly indicated that Russia was in breach of international humanitarian law and that the 24 Ukrainians seized could be considered prisoners of war.

Portnov notes that the events were characterized at a meeting of the military cabinet called by Poroshenko as “an act of military aggression”.

After the emergency session of Ukraine’s National Defence and Security Council, Poroshenko initially asked the Verkhovna Rada to declare military rule throughout Ukraine for two months.  This would have clashed with the beginning of the presidential election campaign, due to begin on 31 December 2018.

Portnov’s claim begins to unravel swiftly.  While it is true that this was Poroshenko’s initial proposal, he changed it (according to Portnov, after protests from the public and from politicians, including parliamentarians).  Military rule was declared for one month and only in 10 oblasts.  Portnov prefers to omit a crucial detail which is that this period was not later extended, meaning that the elections passed as scheduled.

He then goes on to asserted that “according to available information, the above events were the result of planned and illegal actions by the person who was then President of Ukraine…”  Poroshenko’s actions were supposedly “aimed at deliberately provoking aggressive and predictable actions by the Russian military during a tense situation and causing losses to the Ukrainian Navy.”

“According to the plan by P.O. Poroshenko and the organized group that he headed, the provoked incident was supposed to lead to high-profile consequences and the possibility of asserting Russia’s open aggression against Ukraine in the Sea of Azov and, as a consequence, asserting that there were grounds for imposing military rule.”

The end result, Portnov claims, was that Poroshenko would be able to “council and postpone indefinitely” the elections since these cannot be held during military rule.  Poroshenko’s “criminal plan”, he asserts, was to effectively seize power, impose all kinds of restrictions on the media, civic rights, the activities of opposition politicians, etc. etc.

That nothing of this actually happened, he grumps, is not thanks to Poroshenko and his ‘accomplices’ but “solely due to the significant public attention, the mass criticism from civil society and the refusal in view of this by MPs to take part in carrying out this scenario”.

This allegedly failed dictator, who was stopped in his tracks by public opinion,  should, he claims ,be charged with ‘state treason’, ‘actions aimed at violent overthrowing of the constitutional order’ and exceeding his powers as a military official.

Portnov was, until Yanukovych came to power, in the bloc of Yulya Tymoshenko, who was imprisoned by the Yanukovych regime on charges not much more credible than those above.  It is frustrating that he has achieved widespread headlines about a ‘criminal case’ opened against Poroshenko on the basis of this opus, but hopefully its force will end there.