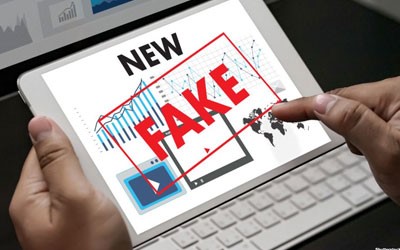 Disinformation about Ukraine in the self-proclaimed ‘Donetsk and Luhansk people’s republics’ has almost doubled over the last two years, with most of the favourites for fake news the same as in the Russian state-controlled media.  Oksana Romanyuk, whose Institute for Mass Information [IMI] carried out the studies both two years ago and in April this year, believes the Russian-controlled ‘republics’ may be ladling on the fakes to compensate for their dwindling power to influence the local population.

IMI’s monitoring was, of necessity, only of the available Internet media since there is no safe way of carrying out public surveys in the so-called ‘republics’.  Even telephone surveys would be unlikely to give a true picture since respondents would almost certainly be afraid to answer honestly.  The Internet sites were monitored for fakes and disinformation, with this the main area where there had been an alarming increase. If in 2017, 11% of content constituted disinformation, in April 2019 21% of ‘news’ about Ukraine was of dubious accuracy or outright fakes or disinformation.

As well as information about the conflict which seriously clashed with those provided by Ukraine’s operational headquarters, there was also disinformation about the language bill, signed into law by the outgoing President Petro Poroshenko, the Orthodox Church of Ukraine, and about the new President, Volodymyr Zelensky. As mentioned, the latter subjects have also been widely and, most often misleadingly, covered by the Russian media.  Given the widely circulated claims  that Poroshenko was hoping to sabotage Zelensky’s inauguration, it seems likely that the ‘republics’ also followed Russia in pushing attempts to undermine the validity of the presidential elections.

Such a high level of disinformation is of major concern given that the vast majority of people in these areas have no access to Ukrainian media.  One of the first things that happened as soon as the Russian and pro-Russian militants seized control of an area in 2014 was that Ukrainian television channels were taken off air, with Russian or militant channels using the frequencies.  A large number of Ukrainian Internet sites, especially the ones like News of Donbas that report honestly on events in the ‘republics’ are blocked.  This means that the population in occupied Donbas are receiving information from channels that are overtly propagandist and anti-Ukrainian.

Rather unexpectedly, given the above, the monitors found that the level of hate speech directed against Ukraine had decreased, from 11% in 2017 to 5% now.  The main target was the Ukrainian Armed Forces who were referred to as ‘punishers’;  ‘Nazis’ and ‘sadists’.

While the amount of fake material had increased significantly, the general tonality of the media remained largely unchanged.

The media was most positive in covering the de facto local authorities, with 89% of the material positive and in complimentary mode. This is against 82% in 2017.  The worst that material got was when it was neutral (11%).  Not one piece of material was found that was critical of them.

There was a lot less material about Russia, but 85% of this was positive, with just 2% in negative colours. The latter were published before Russian President Vladimir Putin issued his decree simplifying the process by which residents of the Russian-controlled ‘republics’ can get Russian passports. After that, all material was positive.

All of this is in marked contrast to coverage of the Ukrainian government, with 49% of this negative, and 45% neutral.  The remaining 6% that was positive all pertained to Zelensky’s election campaign, with Zelensky also getting the least coverage (19%, as opposed, for example, to Poroshenko’s 63%).

Russia’s hostile actions in offering Russian passports to Ukrainians in Donbas were just the latest in ongoing measures aimed at drawing the occupied territory closer to Russia.  This is while Moscow claims that it is Ukraine which is failing to implement the Minsk agreements.  The elections which Minsk envisages, must be held in accordance with Ukrainian legislation.  At present there are multiple obstacles in the way of this, including the total lack of any free and objective media.  As well as the above monitoring, this is evidenced by the fact that at the very least two journalists: Stanislav Aseyev and Oleh Halaziuk are imprisoned after both wrote honestly about what they observed around them in ‘DPR’