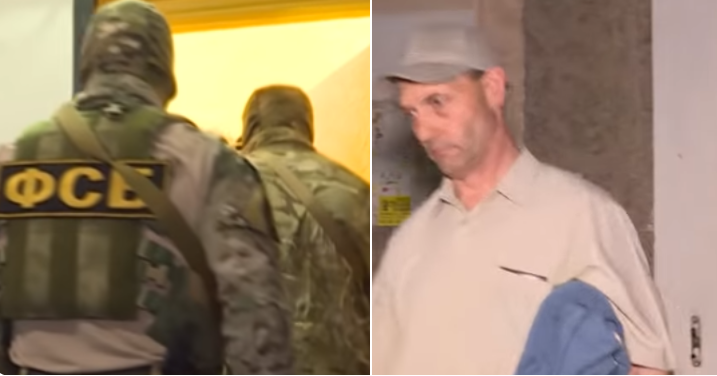 New armed searches by FSB and special force officers have been carried out of the homes of Jehovah’s Witnesses in occupied Sevastopol, with one man, Viktor Stashevsky, arrested.  Although released from custody the next day, the 52-year-old believer is facing criminal charges which could carry a prison sentence of up to 10 years.  Russia has reverted to Soviet practice in persecuting Jehovah’s Witnesses for their faith, and it is now illegally bringing this repression to occupied Crimea.

The Jehovah’s Witnesses’ website reports that armed searches were carried out through the night of 4 – 5 June 2019 in at least nine homes in Sevastopol, with computer technology and telephones taken away.  In at least one case, the houseowner was not home, and the armed men broke in, destroying the door in the process.

Russian state-controlled media put the number of searches even higher, at over 10, and claim that the man detained was the leader of “a local cell” who “held meetings, carried out propaganda of the ideas of this religious sect and also attracted new members to it”.  Over 70 copies of what they call “extremist literature” were removed, as well as reports about donations, brochures and other material.  This allegedly included “instructions on measures of conspiracy and on talking to law enforcement officers”.  Such words and the general tone of the reports were clearly aimed at presenting the Jehovah’s Witnesses as people involved in something illicit, although such advice to believers is hardly surprising given Russia’s internationally condemned ban on a world faith.

The charges against Stashevsky are under Article 282.2, part 1, of Russia’s criminal code – supposedly ‘organizing an extremist organization’.  This is the same charge which Russia has used to sentence Dennis Christensen to six years’ imprisonment.

Christensen’s arrest came just over a month after Russia’s ban of the Jehovah’s Witnesses on 20 April 2017, and the initial sentence led to a major intensification in persecution of believers both in Russia and in occupied Crimea.  That sentence was upheld at appeal level, and it seems clear that any restraint in measures of persecution has now been removed.  That, unfortunately, means that further repressive measures can also be expected in occupied Crimea where Russia’s prosecutions are also in grave breach of international law governing the behaviour of an occupying state.

The warrant for the search of Stashevsky’s home was issued by ‘judge’ Anatoly Vasylenko from the Leninsky District Court in Sevastopol.  All the believers who faced searches were summoned the following morning to FSB ‘investigator’ A. Chumakin.  According to the JW report, this individual “specializes in persecution for faith in Crimea.”

Stashevsky is the fourth Crimean known to be facing criminal charges for his faith, after two other major ‘operations’.

During the night of 15-16 November 2019, armed searches were carried out of around 30 homes in Dzhankoy,  During one of these, 78-year-old Oleksandr Ursu was pinned to the wall and was also handcuffed for some time.  46-year-old Serhiy Filatov was initially detained, though later released under a signed undertaking not to leave the city.  Filatov is himself from the Kherson oblast, but he moved to Crimea with his wife and four children in 2003 because of their daughter’s health needs.  He is now also facing the same ‘extremism’ charges and a possible 10-year sentence.

The next such wave of armed searches came on 20 March 2019 in the Yalta region, with at least six homes targeted.  On that occasion, 34-year-old Artem Gerasimov and 41-year-old Taras Kuzio were both initially detained, though neither is at present in custody.  Both are, however, facing the same ‘extremism’ charges.

When they came for Gerasimov, his brother, who is not himself a Jehovah’s Witness, asked: “Why have you come for Artem?  After all, he walks around the city with a Bible, not a machine gun”.

In each of these cases, the Russian or Russian-controlled state media have followed the FSB in talking about a “Jehovah’s Witness cell being uncovered”.  Everything about such coverage is aimed at arousing suspicion and distrust towards entirely law-abiding citizens and a world faith which Russia has, for highly suspect reasons, chosen to label a ‘sect’ and persecute.