Judge who refused to place Saakashvili under house arrest is suspended pending dismissalSaakashvili was illegally stripped of his Ukrainian citizenship. Formal grounds for deportation are mere cosmeticsLegal experts demolish the allegations against Mikheil Saakashvili as his associate jailedUkraine launches spiral of illegality with abduction & expulsion of Georgians linked to Mikheil SaakashviliUkraine may answer to the Court in Strasbourg for abduction-like deportation of three GeorgiansSerious concern about motives as Ukraine detains brother of Mikheil SaakashviliPoroshenko strips political opponent Mikheil Saakashvili of his Ukrainian citizenshipIs President Poroshenko turning to selective stripping of Ukrainian citizenship?Poroshenko law could strip huge numbers of Ukrainians of their citizenshipUkrainian citizens are now a group at risk in Russian-occupied CrimeaRussia backtracks over Ukrainian citizenship in CrimeaRussian, or else: On how Russia is foisting its citizenship in CrimeaCrimean Tatars and others face citizenship dilemmaRussian methods: Calls for Crimea’s return to Ukraine could get you imprisonedMGIMO historian fired for article comparing Crimean annexation to Hitler’s AnschlussInformation channels at warDonetsk Front in Putin’s Dirty WarScurrilous rumours used to spread fear and distrust in Eastern oblastsAutoMaidan activist shot at near ChongarRussian troops already deployed in mainland Ukraine
• Topics / Politics and human rights
• Topics / Court practices 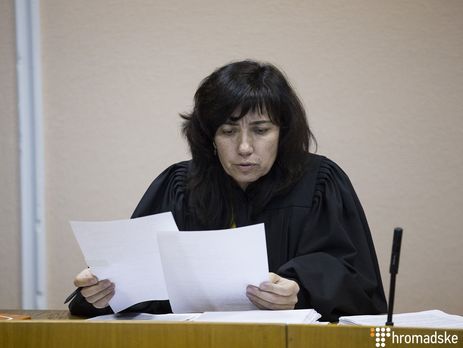 The High Council of Justice has, as feared, dismissed Larisa Tsokol from her post as judge, purportedly over disciplinary proceedings quite unrelated to her refusal in December 2017 to place former Georgian President and Ukrainian opposition politician Mikheil Saakashvili under house arrest.  Although prominent lawyers, who examined the proceedings, stress that the judge’s work was not always without fault, the timing of the disciplinary proceedings aroused concern and dismissal is a very harsh measure.  It appears especially severe given that at least 227 judges who were involved in knowingly wrongful prosecutions of Euromaidan activists remain in their posts and in the light of several highly controversial appointments to the Supreme Court.  These include Stanislav Holubytsky, who gained notoriety for his life sentence against Volodymyr Panasenko for a crime essentially nobody believed then or believes now that Panasenko  committed.

As reported, Tsokol was a judge at the Pechersky District Court in Kyiv until disciplinary proceedings aimed at her dismissal from serving as a judge were initiated against her on 19 October 2018 by the High Council of Justice.  This was, supposedly, for disciplinary misdemeanours “which discredit the calling of judge and undermine the authority of the justice system.”

Tsokol has been a judge since March 1998, and has been involved over the years in several controversial cases.  In November 2004, she revoked the decision to initiate criminal proceedings against Oleksiy Pukach, the former Police General now serving a life sentence for his role in the killing of Ukrainian journalist Georgy Gongadze.  Pukach immediately disappeared and was only arrested in 2008.

The then President Petro Poroshenko’s move in July 2017 to strip Saakashvili of his Ukrainian citizenship, and then later the attempts to prosecute him, earned Ukraine a great deal of negative publicity, with the steps fairly widely believed to be aimed at eliminating a political critic and possible rival to Poroshenko.  Such suspicions were only fuelled by the scepticism which several legal experts expressed regarding the dubious or legally contentious charges against Saakashvili (details here).

President Volodymyr Zelensky has now reinstated Saakashvili’s citizenship and the former ‘criminal charges’ appear to have been forgotten.

Not so the disciplinary proceedings against Judge Tsokol.  The first of these was announced by the High Council of Justice [HCJ] on 22 December 2017. HCJ denied that this had anything to do with the judge’s ruling in the Saakashvili case, citing a complaint lodged in March 2017.

Further proceedings were initiated on 30 July 2018 by the Second Disciplinary Chamber, and there was apparently a third ruling in January 2016 where Tsokol froze goods worth 13 million UAH removed during a search.  This was overturned at appeal level.

On 1 November 2018, Roman Kuybida, Deputy Director of the Institute for Legal and Political Reform and his colleague, Roman Smalyuk issued an assessment of the proceedings against Tsokol, entitled ‘Punishment or persecution? ‘Chance’ coincidences in the case of Judge Tsokol’.

They explain that the first complaint was over Tsokol’s refusal in January 2017 to allow a complaint against the inaction of the investigative bodies in not registering an offence in the register of pre-trial investigations.  The grounds for the refusal were that the plaintiff did not appear in court.  Tsokol’s ruling was not appealed.

The disciplinary chamber found signs of two disciplinary offences, namely that the claim had been considered in the absence of the plaintiff and that the latter’s rights had been violated by the rejection of the claim on grounds not allowed for by legislation.

As reported earlier, the second proceedings arose from a complaint lodged by Anton Yanchuk, Deputy Minister of Justice regarding European Integration Issues on 23 June 2015, with this complaint apparently only sent to HCJ by the High Qualification Commission of Judges of Ukraine on 25 April 2018.

This complaint is worrying because of its substance, as well as the timing, especially since the ruling which Yanchuk challenged was upheldv by the Kyiv Court of Appeal on 17 May 2016.

Tsokol allowed the application, ordering that Ukraine enforce this interim award, with this then upheld by the Kyiv Court of Appeal.

The Deputy Justice Minister had asserted that Tsokol’s ruling was “unwarranted and that enforcement of the ruling would infringe Ukraine’s public order and would threaten its interests, and lead to losses to the state budget” of almost 600 million UAH.  These were very similar to the arguments used in the internationally condemned prosecution of ex-President Viktor Yanukovych’s main rival, Yulia Tymoshenko.

Kuybida and Smalyuk note, with respect to the ‘Stockholm Arbitration’ ruling that, even though the ruling was eventually overturned, some higher instance courts had agreed with Tsokol’s position.  The disciplinary chamber, however, asserted that Tsokol had deliberately failed to give the motives for passing her ruling, and that her ruling “interfered with the state sovereignty of Ukraine which violates the foundations of its constitutional order”.

Having looked at the specific disciplinary proceedings, Kuybida and Smalyuk also comment on certain “strange coincidences”.   The rapporteur in the Tsokol case, who initiated the first disciplinary proceedings was Oleksiy Malovatsky, a lawyer closely associated with the Bloc of Petro Poroshenko, who became a member of HCJ with the active support of this bloc. He was later to prepare the case against Tsokol after a second complaint was lodged, this one after her ruling on Saakashvili, and then after a third complaint was added to these.

The authors found other ‘coincidences, as well as other disturbing aspects to this case.  These include the fact that only Tsokol facing disciplinary proceedings over the Stockholm arbitration case.  Even if one accepts the argumentation given for such proceedings, there needs to be consistency, and the case was reviewed in other courts as well, with at least one upholding Tsokol’s ruling.

The authors conclude as follows: “Tsokol has held the post of judge for over 20 years and did not earlier face any disciplinary proceedings. The HCJ’s strict attention specifically to her, the severity of their punishment against a background of leniency towards the more serious offences of other judges, as well as other strange ‘coincidences’ can with a high level of probability point to the use of instruments of disciplinary liability as revenge for rulings in quite different cases”.

On 22 January 2019, the DEJURE Foundation announced three laureates for their award ‘Honour of the Year’: Pavlo Parkhomenko; Larisa Holnyk (whose effective persecution is outlined here) and Tsokol “for her independent consideration of cases despite political pressure”.