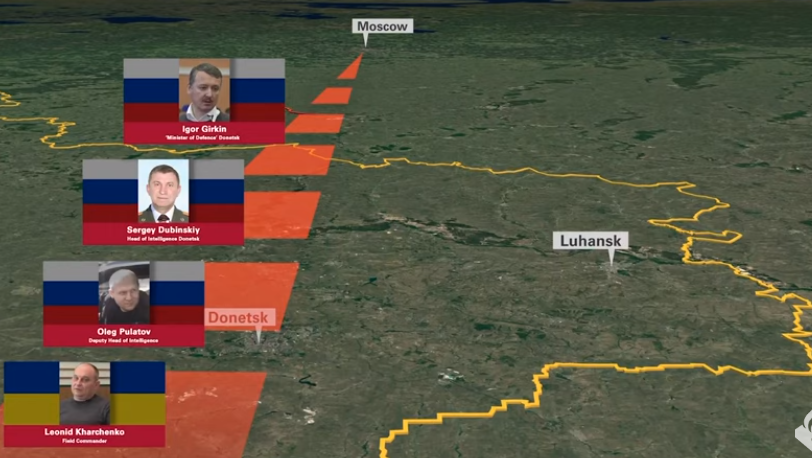 One of the first western reports from the MH17 Joint Investigative Team’s press conference on 19 June called the four suspects “Russian-backed separatists”, and suggested that Moscow could be breathing a sigh of relief.  While the Kremlin could well enjoy such misleading descriptions for the three Russian suspects, it is hard to see grounds for relief.

The Joint Investigative Team, which was formed by countries directly affected by the downing of Malaysian airliner MH17 over militant-controlled Ukraine on 14 July 2014, has already concluded that “the Buk missile which downed Malaysian airliner MH17 on 17 July 2014 came from the 53rd Anti-Aircraft Missile brigade which is a unit of the Russian army from Kursk in the Russian Federation”.

The press conference on 19 June was to announce the first four suspects whom JIT wishes to put on trial for their part in the crime. While none is accused of having fired the missile, the chain of command to Russia provided by the four men is believed to have played a direct role in getting the Buk missile launcher to Ukraine and subsequent events.   Igor Girkin, the ‘military commander’ of the self-proclaimed ‘Donetsk people’s republic’ is described as a “former FSB colonel”.  Girkin was one of the first Russians to fall under US sanctions because of his prominent role in Russia’s invasion and annexation of Crimea.  He is known to have travelled via Russia, together with a group of highly-trained and heavily armed fighters, from Crimea to Sloviansk in eastern Ukraine, seizing control and effectively beginning the war on 12 April 2014.  In the sanctions list, he was described as a former GRU or Russian military intelligence officer.

The next person on the list is Sergey Dubinsky, who  “was employed by the GRU, or Russian Military Intelligence Service’.  The caption on his photo says nothing about him being ‘ex’-GRU, and it became clear from the Dutch Prosecutor’s words about Russia’s failure to cooperate that it is suspected that he was still “working for the Russian government”.  The third Russian is Oleg Pulatov, a former soldier with the GRU’s special forces spetsnaz unit.  It was stated that “in the past all were sent abroad in the service of the Russian Armed Forces”.

It is worth noting that at least three Russians caught while engaged in military activities in occupied Donbas have changed their original story, after Moscow’s intervention, and claimed to “have left” military service before heading off to eastern Ukraine.  The two GRU officers caught in the Luhansk oblast in May 2015, Yevgeny Yerofeyev and Alexander Alexandrovich repeatedly told the OSCE, Russian independent journalists and human rights activists that they were acting GRU officers and only changed this story some months later, presumably knowing that they would be exchanged for one of Moscow’s most well-known Ukrainian political prisoners, Nadiya Savchenko (details here). A simple sudden change in position months after being captured was seen with Russian contract soldier Viktor Ageyev.

It remains to be seen whether the prosecution will probe the men’s real links with Russia’s GRU at the time of the disaster. Robert van der Noordaa, who is carrying out MH17 journalist investigations, noted that JIT had deliberately made public an intercepted call between another Russian militant leader Alexander Borodai and Vladislav Surkov, the aide to Russian President Vladimir Putin, believed to exercise direct control over the Russian proxy Donbas ‘republics’. The screen shown makes it quite clear that Borodai, who was also pretending to be a private individual ‘defending’ Donbas, and Putin aide Surkov have virtually identical phone numbers, suggesting that both were issued by the same official department.

JIT are planning a trial beginning in March 2020 and said that they were placing the above three suspects on the national and international wanted list, as well as one Ukrainian national, Leonid Kharchenko.  Although participants in the press conference were told that neither Russia nor Ukraine would be asked for the men’s extradition since that is prohibited by their constitutions, Ukraine, in fact, has every interest in catching Kharchenko who is believed to be in militant-controlled Donbas.  There is no expectation at all that Russia would cooperate, even in summoning and interrogating Girkin, Dubinsky and Pulatov, all of whom are thought to be in Russia.

Girkin was again reported as having denied that the militants were behind the downing, and as repeating his refusal to say any more on the subject.  This was viewed by some as a careful choice of words, in that he only denied the militants’ culpability, not that of the Russian military.  Although it is more than likely that Moscow could not risk Girkin’s testimony in any international court, there is no reason to suspect Girkin of being unable to tell a lie.  It seems unlikely, however, that he would not understand the danger of issuing veiled threats about possible revelations, given the very high number of militants who have died suspicious deaths.

Dutch Chief Prosecutor Fred Westerbeke made it clear that they would be seeking ways of moving forward on a trial in absentia.  Such a trial must reveal a considerable amount of information that Moscow will have difficulty explaining.  In describing the suspects’ respective roles and subordination, it was asserted that “being the highest in command, Girkin was in direct contact with the Russian Federation”, and that Dubinsky “was in regular contact with Russian officials as well”

Together the suspects “formed a chain linking the self-proclaimed Donetsk people’s republic with the Russian Federation”.  “It was through this chain that the suspects were able to get heavily military equipment from Russia to the battlefield in eastern Ukraine”. This, the participants were reminded, was how the Buk missile launcher was brought to Donbas, and then hurriedly sent back across the border after the disaster.

Russia was busy on Wednesday both officially dismissing the accusations, and through state-controlled media trying to undermine JIT.  This included the claim that the team does not have the proper international status, which is one of the many lies that can only work for a domestic audience, since any lack of official status is only because Russia used its power of veto at the UN’s Security Council to block an international investigation.

In fact, the Dutch Prosecutor listed many of the ways in which Russia is refusing to provide basic information, for example, about the movements of the Buk missile launcher and whether Dubinsky was working for the government in 2014.

There really is only one likely reason why Russia would wish to conceal such information.