Ukrainian jailed for protest over monument to Russian invaders of Crimea 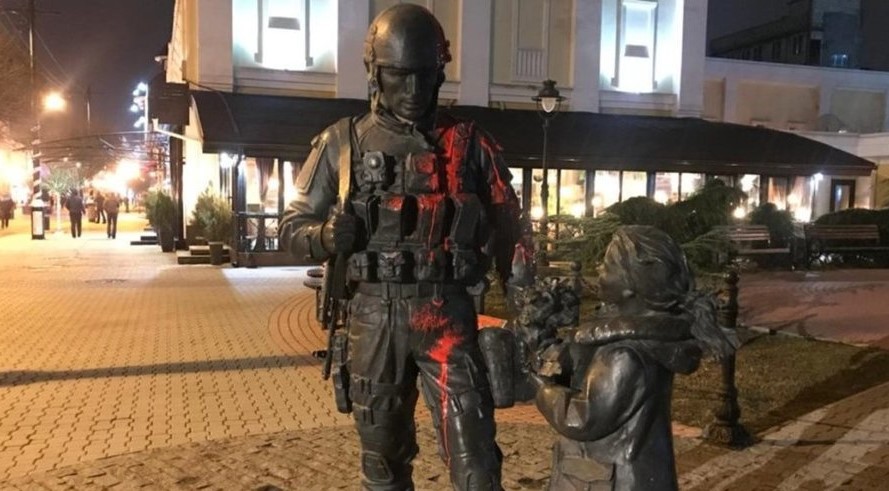 A Russian-controlled court in Simferopol has sentenced Maxim Sokurenko to six months in a minimum-security prison colony for a bit of paint, daubed on a statue in occupied Crimea.  The reason for criminal proceedings, rather than a minor administrative charge, was undoubtedly because this was the monument erected by the Russian occupation regime to the Russian soldiers without insignia who seized control on 27 February 2014.  The Ukrainian citizen was deemed to have been “motivated by political enmity’ based on his rejection of Russia’s occupation of Crimea.

The Crimean Human Rights Group has only just received a copy of the ruling which was passed by ‘judge’ Olha Chepel back on 17 April 2019.  Sokurenko was found guilty of vandalism (Article 214, paragraph 2 of Russia’s criminal code).  The young man has been in custody since 25 January, with one day in detention, where the conditions are tantamount to torture, being calculated as one and a half days in a prison colony.

Although the ruling does repeat Russia’s narrative about the pseudo-referendum used to try to conceal its military invasion and occupation, it is really quite honest in spelling out Sokurenko’s position.  Not only does he not recognize Russia’s annexation of Crimea (described as it’s “joining the Russian Federation”), but he also considers the use of Russian state symbols on Crimean territory to be illegal. “In order to express his civic position and attract the attention of the current authorities, he daubed paint onto the monument to solders and officers of the Russian authorities”.

It was originally reported that the monument in the centre of Simferopol had been daubed with red paint during the early hours of 28 January 2019 by a person in a state of inebriation.  The police report said that a protocol had been drawn up over an administrative offence (being inebriated in a public place – Article 20.21 of Russia’s code of administrative offences).

It is likely that the charges were so heavily increased once it became clear that the 36-year-old Sokurenko had been making a conscious statement against Russian occupation.  On 29 January he was remanded in custody by ‘judge’ Evelina Fedorenko from the Russian-controlled Central District Court in Simferopol.  This was despite the fact that since the criminal charge brought has a maximum three-year sentence, detention was not applicable.

It is evident, as the Crimean Human Rights Group pointed out, that both Sokurenko’s detention and this sentence are politically motivated persecution for his refusal to accept Russia’s occupation.

It is interesting that Russia’s Human Rights Ombudsperson Tatyana Moskalkova claimed shortly after his arrest that Sokurenko had ‘confessed’ and that he had no complaints. Since the first assertion was false, it is unclear whether we should believe the second.

Russia calls the monument in question to ‘polite people’, a highly inappropriate euphemism for the heavily armed Russian soldiers without insignia who seized control of the Crimean parliament, airports and other strategic locations in Crimea on 27 February 2014.   Russia has been assiduously trying to rewrite the story of those days, especially the chronology of events, so that the Russian soldiers are viewed as having been there to simply ‘protect’ people during the so-called ‘referendum’.  That pseudo referendum was called by the marginal pro-Russian Sergei Aksyonov and his people who were installed at gunpoint by the Russian soldiers.  The ‘voting’ also took place at gunpoint, although, according to Russian President Vladimir Putin’s Human Rights Council, still failed to achieve a real majority.