Russia adds 4 politicians under EU sanctions to its first ‘delegation’ if Council of Europe gives in to blackmailA High Human Rights Price if the Council of Europe capitulates to RussiaCouncil of Europe’s reinstated Russian delegation would likely include illegal ‘deputies’ from occupied CrimeaCouncil of Europe looks set to cave in to Russian blackmailCouncil of Europe will share responsibility for grave human rights violations if it gives in to Russia nowCouncil of Europe will betray its human rights mandate by giving in to Russia, Mr JaglandCouncil of Europe’s PACE on the brink of electing sanctioned Russian Crimea land grab propagandist as Vice PresidentUkraine imposes sanctions on pro-Russian MP Medvedchuk & his wife. What about criminal proceedings?Russia reverts to worst Soviet times in reprisal sentence against historian of the Terror Yury DmitrievWhat is wrong with the bill on SBU?Russia forced to ‘change the status’ of occupied Crimea because of sanctions Ukraine’s President Zelensky blocks three pro-Russian channels linked with MedvedchukRussia threatens criminal prosecution over calls to impose sanctions PACE finalizes capitulation to Russia, while listing all reasons why this is appeasement Not just Navalny. EU sanctions needed over 18-year sentences against Crimean political prisoners New Russian offensive to deprive imprisoned Russian Historian of the Terror Yury Dmitriev of his lawyer Application practice of Article 109 of the Criminal Code of UkraineApplication practice of Article 110 of the Criminal Code of Ukraine2020: There was no worse year in the realm of human rights after the Revolution of DignityBandera. An Invitation to a Calmer Conversation
• Topics / Politics and human rights 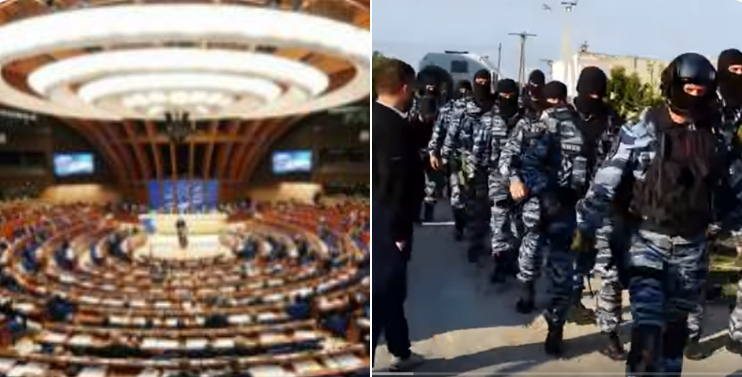 A majority of delegates to the Parliamentary Assembly of the Council of Europe [PACE] have voted for a deceptively named resolution with one single real aim.  The resolution will enable Russia to return triumphant to the Council of Europe although it has done nothing to end its aggression against Ukraine and occupation of Crimea which prompted sanctions in 2014.  Among those pleading with the PACE delegations to not take such a disastrous step were the relatives and lawyers of the ever-mounting number of Moscow’s Ukrainian political prisoners, the families of the MH17 passengers murdered by a Russian BUK missile on 17 July 2014, and numerous human rights NGOs.

Due to the length of the debate, the resolution was finally put to the vote on 25 June.  This means that 118 delegates (against 62, 10 abstentions) voted for supposed ‘dialogue’ with Russia on the day that the latter must answer to the UN’s International Tribunal for the Law of the Sea as to why it has not released 24 Ukrainian prisoners of war despite the Tribunal’s binding order. As Nikolai Polozov, coordinator of the imprisoned men’s lawyers, wrote bitterly, in Moscow they will certainly be opening the champagne and  “laughing at the useful European idiots who did their dirty work for them”.

Earlier in the day, Polozov spoke with one of the European bureaucrats whose counter-arguments were at the level of claiming that “Ukraine also fails to properly implement European Court of Human Rights rulings. Given Russia’s flagrant violation of direct ECHR orders to hospitalize or allow doctors to gravely ill Ukrainian political prisoners, this argument bears very little scrutiny and it seems he had no others.

He was unable, for example, to answer the question put by Denis Hrytsenko, the Ukrainian POW, whom Polozov is representing.  The question was indeed simple enough: why, if the Russian Federation has not fulfilled the PACE’s January resolution demanding the immediate release of Hrytsenko and the other 23 men, is PACE now awaiting the return of the Russian delegation?  No answer was forthcoming.

No explanation was provided as to how the supposed ‘dialogue’ would help the over 115 Ukrainian political prisoners, like Seiran Saliev, whose wife Mumine Salieva was also present at the PACE on 24 June.  Saliev, a civic activist and journalist, faced various forms of lesser persecution before being arrested in October 2017.  He and very many other civic activists are now facing sentences for no crime whatsoever of between 10 and 20 years.

There was no answer to this, nor numerous other questions.  The delegates also blocked a debate on the new MH17 report which both reiterates Russia’s key role in the downing of the airliner and killing of all 298 people on board, and names three ‘former’ or probably current Russian military intelligence officers as suspects.

Considering all the fine words about the Council’s ‘values’, they could at least have honoured the memory of those 298 people, including 80 children, by heeding the plea from Stichting Vliegramp MH17.  This MH17 Flight Disaster Foundation representing the families of the victims asked that Russia not have its right to vote in the Council of Europe reinstated until it gave firm guarantees that it would cooperate in the investigation into the downing of the Malaysian airliner.  Those espousing Russia’s “rights to vote, to speak and to be represented” in PACE would do well to recall that Russia has used its power of veto at the UN Security Council to block an independent investigation, has consistently failed to cooperate with the Joint Investigative Team, while spending a great deal of money on propaganda trying to push other, implausible ‘versions’.

PACE has also ignored pleas from a very considerable number of prominent human rights groups who spoke of “a significant and worrying change of Council of Europe policy towards Russia” and warned that the time was not right to be lifting sanctions. While some Russian human rights groups were concerned by the possible threat to Russia’s membership of the European Court of Human Rights, others, like the Memorial Human Rights Centre were convinced that the danger of giving in to pressure, amid mounting human rights violations, was much too great.

Like the resolution that was passed, the comments during the debate and on the PACE website from the resolution’s advocates are all full of high-sounding words, and mantra-like repetition of phrases about “commitment to common values”.

The upshot is that Russia has won carte blanche for more repression, and for more likely provocation within the Council of Europe, including with respect to members of their delegation.

As reported, a high-ranking Russian politician (Konstantin Kosachev) stated quite unequivocally on 19 June that voting for this resolution would demonstrate” the mistaken nature of all the Council of Europe’s previous actions”.  On that day, Russia announced the makeup of its ‘delegation’ if PACE met its ‘ultimatum’.  That makeup has not yet been changed, although it contains four people who are under EU sanctions for their role in Russia’s annexation of Crimea (details here).  As well as openly using terms like ‘ultimatum’ and ‘demands’, Russia has also made it clear that it could include illegal ‘deputies’ from occupied Crimea in its ‘delegation’.

This will gravely compromise the Parliamentary Assembly of the Council of Europe which has now voted to do away with any mechanisms for countering such brazen disregard for PACE resolutions and Council of Europe ‘common values’.