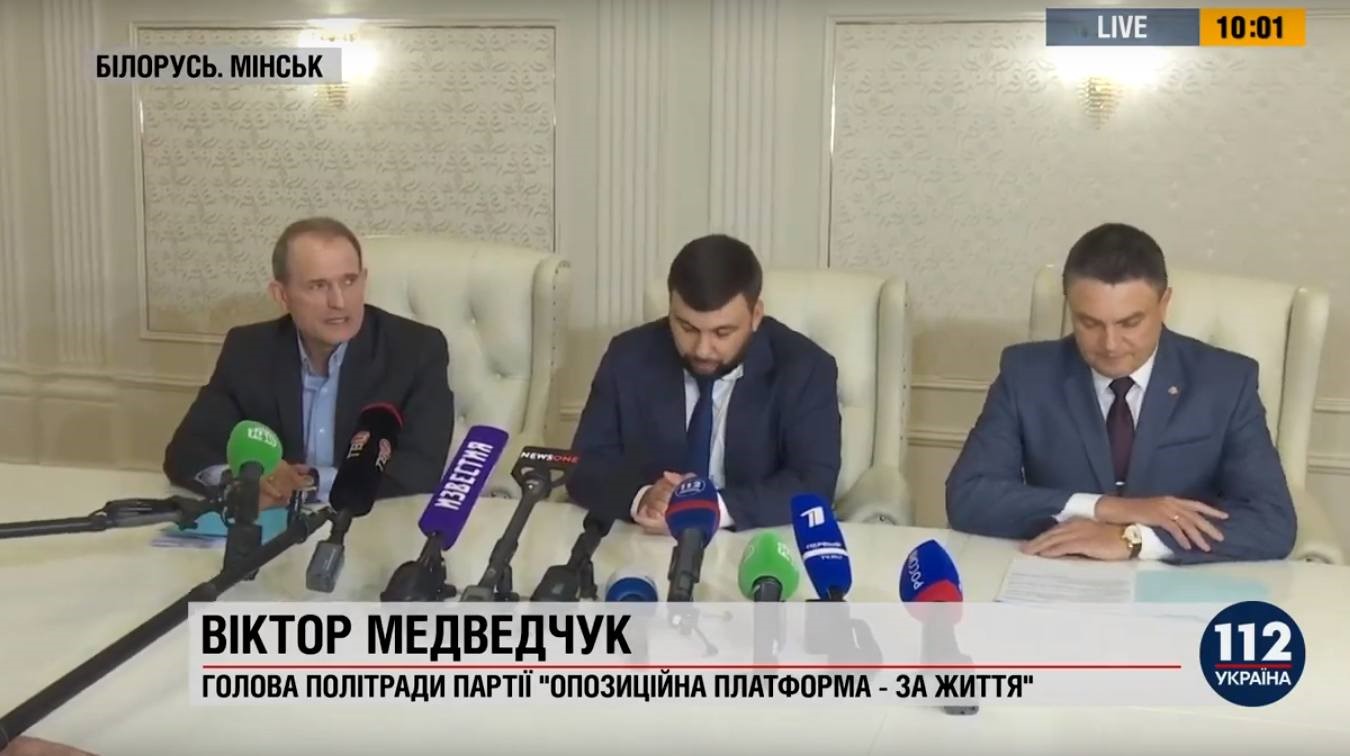 The leaders of the so-called ‘Donetsk and Luhansk people’s republics’ have announced that they will release four Ukrainians held prisoner, with this presented as being in response to a request from Viktor Medvedchuk.  It has long been assumed that a hostage release might be arranged in advance of Ukraine’s parliamentary elections as a boost to Medvedchuk, a highly controversial Ukrainian politician and friend of Russian President Vladimir Putin.  The release is, however, frustratingly limited with Russia evidently still intent on holding on to most of its Ukrainian military and civilian hostages held by the proxy ‘republics’.

The meeting received wide coverage in the Russian state-controlled media, and was also broadcast live by the three Ukrainian television channels (112.Ukraina; NewsOne and ZIK) owned by a close ally of Medvedchuk, Taras Kozak.

There was no attempt made to conceal the fact that this was linked to the coming parliamentary elections.  It would, after all, have been logical to mention Medvedchuk’s long-standing role in seeking prisoner exchanges.  Instead TASS described him as “the head of the Ukrainian party ‘Opposition Platform – For Life’.  Denis Pushilin from ‘DPR’ and Leonid Pasechnyk, from ‘LPR’ claimed the release of four prisoners was “a gesture of good will” and used the opportunity for disinformation about who is blocking the release of Ukrainian hostages, of whom there are at very least well over 100.

Ukraine’s Security Service [SBU] stated on 27 June that it had no official information about the four prisoners whom the militants named, but that they were ready to greet any Ukrainians who had been held in captivity.

The whole stunt had very clearly been staged, with this including the choice of prisoners.   Hromadske Radio reported what it had managed to learn about the four men from open sources. 31-year-old Dmytro Velyky was serving in the Ukrainian Army.  He was reported having gone absent without leave in the summer of 2016, though the militants claim he was captured on 11 September that year. 54-year-old Edward Mikheyev is said by a source controlled by the militants to have been in the ‘LPR police’.  He was then accused by the militants of having gone to Ukraine to register for a pension and supposedly been recruited there by the SBU.  The same publication reports that at his ‘trial’, Mikheyev admitted to the charges but said that since he didn’t consider himself an ‘LPR citizen’, he had had the right to work with the SBU.  35-year-old Maksym Horyainov is a soldier working in a medical unit and was taken prisoner in May this year.  53-year-old Yakiv Veremeichyk is a soldier who was captured in May 2018, together with a fellow soldier.

The last major exchange of prisoners was on 27 December 2017, and was, typically, first mentioned by Putin.  It is extremely unlikely that any release of the known POWs and civilian hostages will take place without a green light from the Kremlin

The hostages include two professional Ukrainian spetsnaz officers Serhiy Glondar and Oleksandr Korinkov who were taken prisoner near Debaltseve in February 2015, after a battle which Putin is believed to have ordered and which the Russian military played a major role. Bohdan Pantyushenko is also a professional military man who has been in captivity even longer, since 18 January 2015.

Many of the civilian hostages have also been written about here.  They include two journalists / bloggers – Stanislav Aseyev and Oleh Halaziuk -  who were almost certainly seized for writing independent material about what was happening in Donbas.

There are at least 118 hostages, however that figure is quite likely to be higher. On the same day as Medvedchuk’s meeting with the militant leaders, another 12-year ‘sentence’ was passed on an unidentified woman who was accused of working for the SBU and of ‘extremism’.  We know from previous ‘trials’ how fictitious the charges are likely to have been, and how unlikely it is that the people had anything remotely resembling a real trial.  News of Donbas, which has reported this latest ‘sentence’, points out that none of them would be recognized by any democratic country.