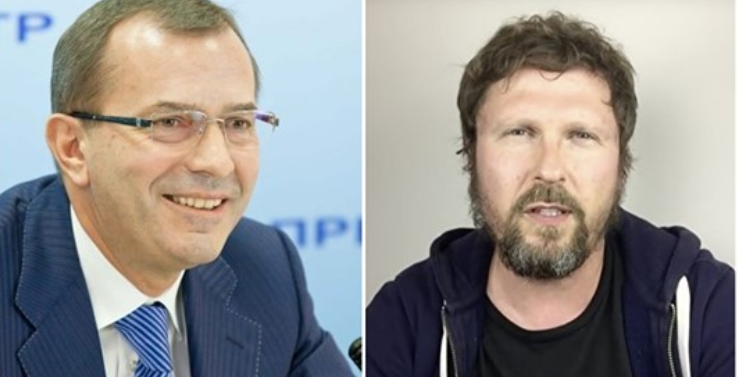 Update:  After the outrage that the registration of Klyuyev and Shariy elicited, and after the Security Service seemingly provided supplementary details about the men’s whereabouts over the last five years, CEC removed them from the list of candidates.

Two highly controversial figures have been registered as candidates for the coming parliamentary elections despite near certainty that neither man has, as required, lived in Ukraine for the last five years.  Andriy Klyuyev, the former head of ex-President Viktor Yanukovych’s Administration is believed to have been in hiding in Russia since Maidan and is on Ukraine’s wanted list over his alleged involvement in at very least one Maidan crime.. Anatoly Shariy, who is known for stridently anti-Ukrainian material which closely follows Moscow’s narrative on Ukraine and the war, has been living in an EU country since 2012.  In registering the two men on 2 July, the Central Election Commission [CEC] asserted that it had no choice because of two rulings from June 30 issued by the Cassation Administration Chamber within the Supreme Court.  The Supreme Court has, however, issued its own statement, claiming that its rulings on 30 June only obliged CEC to once again consider the package of documents presented for Klyuyev’s (and, seemingly, for Shariy’s) registration.  This was not what the Deputy Head of the CEC, Yevhen Radchenko asserted to Ukrainska Pravda on 2 July. He said that since the Commission does not have any other documents confirming that Klyuyev does not live in Ukraine and can’t simply issue a second, identical decision,, CEC was unable to refuse to register him (for a single-mandate constituency in the Donetsk oblast).  As far as CEC was concerned, Radchenko continued, they are sure that they have enough documents indicating that Klyuyev is outside the country. “Only the problem is that the court doesn’t consider that these sufficiently prove that.”

Klyuyev held several posts under Yanukovych, the highest as Head of his Administration from January 2014 until he fled the country, together with Yanukovych and others close to the latter, on 23 February 2014.

Klyuyev is now claiming to have been living since then in Donetsk, in the Russian proxy ‘Donetsk people’s republic’.  Since neither Donetsk, nor a big part of the state border between Ukraine and Russia in Donbas are under Ukrainian government control, there is no objective way of verifying the claim.  Given these circumstances, the demand for still further proof could result in a dangerous precedent, with other politicians hiding out in Russia also claiming to have lived in the so-called ‘Donetsk and Luhansk republics’.

This is not the only worrying precedent.  Klyuyev was placed on the wanted list on 18 June 2014 over his believed role in the violent dispersal of students on Maidan during the early hours of 30 November 2013.  A further arrest warrant was issued in early 2015, over charges of embezzlement.  It is therefore unlikely he would set foot in government-controlled Ukraine unless he were elected and subject to parliamentary immunity.  There is also reported to be a criminal investigation against him underway in Austria where he is suspected of money-laundering and abuse of power.

The main item regarding Klyuyev’s residence was a letter from the Prosecutor General’s Office on three pages.  It may well not be sufficient proof that the last official evidence of  Klyuyev having crossed the border was in February 2014 since there would not be documented evidence of his crossing between Russia and Donetsk across the uncontrolled part of the border.  It could surely be questioned how legal such crossings between Russia and occupied Donbas are, however that does not appear to have been treated as an issue.

There are in fact other details mentioned in the Prosecutor General’s Office letter which certainly suggest that Klyuev was often in Russia.

Lawyer Yevhenia Zakrevska, who is representing the victims of the violent dispersal on 30 November 2013, is most unconvinced by the claim that there is not enough proof in the letter. She notes the fact that Klyuyev himself told Interpol that he was living in Russia.  He took part in December 2016 in ‘court hearings’ in Moscow where he testified in a case aimed at declaring the events of February 2014 a ‘state coup’.  In February 2017 he took part in a Russian television broadcast.  Yes, he could have been staying in a Moscow hotel for two months, and could have lied to Interpol, and on other broadcasting occasions where he spoke of living in Russia.

How much proof needs to be demanded, however?  This seems particularly relevant given that the only way Klyuyev can claim to have been in Ukraine for the last five years, as required, is to say that he was in Donetsk where no proof will be forthcoming.

The situation in Shariy’s case is different since there must be proof of his having lived abroad or proof that he has not been in Ukraine, yet he too was registered as a candidate, this time as representing a party that bears his name.

Shariy was under a criminal investigation over use of a firearm when he left Ukraine in 2012.  He claimed to have received asylum in an EU country in June that year, with the Netherlands informing Ukraine in July 2013 that Shariy had been given asylum and could therefore not be returned to the Ukrainian enforcement bodies.  Even if the Netherlands have not granted him Dutch citizenship, which should raise further issues, since Ukraine does not allow dual citizenship, there is simply no question of Shariy having fulfilled the clear requirement to have lived in Ukraine for the past five years.

Around a thousand people took part in a protest on Maidan Nezalezhnosti [Independence Square] on 2 July against the CEC’s registration of Klyuyev and Shariy.