Russia prosecutes for mentioning the Mejlis, but not for hate speech against Crimean Tatars 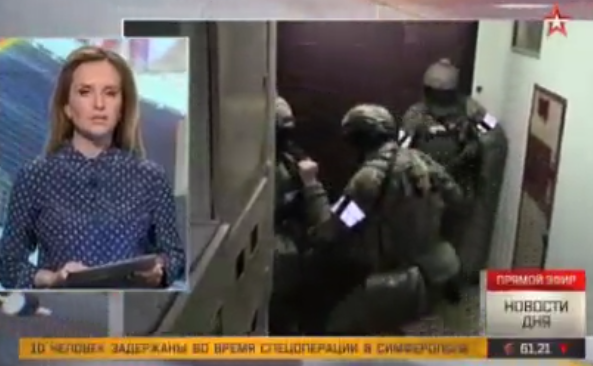 Within a year of Russia’s invasion of Crimea, the peninsula was rated as one of the “worst of the worst” in Freedom House’s 2015 report on press freedom, and the situation since then has only deteriorated.  Independent media have been eliminated, and Russian state-controlled and pro-Russian media are themselves sources of hate speech, most often directed against Ukraine and Ukrainians, in particular Crimean Tatars.  Russia also regularly prosecutes people for something it calls ‘abuse of freedom of mass information’

All such ‘abuse of freedom’ prosecutions identified by the Crimean Human Rights Group were for referring to the Mejlis [representative assembly] of the Crimean Tatar people, the Jehovah’s Witnesses, Hizb ut-Tahrir or several innocuous organizations without mentioning  that they have been banned by Russian courts  as supposedly ‘extremist’ or ‘terrorist’.

The most extraordinary of such cases was that against Rustem Mennanov over a Facebook post greeting veteran Crimean Tatar leader and former Mejlis leader, Mustafa Dzhemilev, on his birthday.  Mennanov was charged with ‘abuse of freedom of mass information’ under Article 13.15, paragraph 2, of Russia’s code of administrative offences and fined two thousand roubles.  The supposed ‘abuse’ was that he mentioned the Mejlis of the Crimean Tatar people in a birthday greeting on social media without adding that the Mejlis is banned in Russia and occupied Crimea. The cynical lawlessness of such a prosecution is breath-taking given that Russia had recently been ordered by the UN’s International Court of Justice to revoke its ban on the Mejlis.  More than two years later, it is still refusing to obey the Court.

Of 10 administrative prosecutions under Article 13.15 which the Crimean Human Rights Group has identified,  Mennanov was the only individual to be targeted.  In the other nine cases, the management of publications containing overtly pro-Russian material were fined. In several publications, there was clear hate speech, however this was totally ignored, with the prosecutions being over mention of the Mejlis, without noting the ban, in four cases and over analogous mention of the Jehovah’s Witnesses in two cases.

In one of  texts about the Jehovah’s Witnesses, this world faith was described as a sect, which CHRG notes is a soft form of stirring up enmity to a religious group. There are many examples of such hate speech (see Russia uses Kerch mass killing for hate campaign against Jehovah’s Witnesses ).

In other publications, social media comments inciting hatred towards Maidan activists and Ukrainians were repeated without any attempt to remove or comment on the hate speech, with the fines imposed solely for mentioning UPA [the Ukrainian Insurgent Army] without adding that this is banned in Russia.

There is nothing unexpected about such failure to react to hate speech. A monitoring study carried out by CHRG and the Human Rights Information Centre in the Spring of 2018 found that Russia is deliberately creating an atmosphere of fear and aggression in occupied Crimea with Ukraine and Ukrainians pitched as ‘the enemy’.   The hate speech was directed against Ukrainians in general – both as a people and as a political community, against Crimean Tatars, Muslims, migrants, as well as Euromaidan activists. Its toxic effect was exacerbated by the overall absence of free and independent media in occupied Crimea.