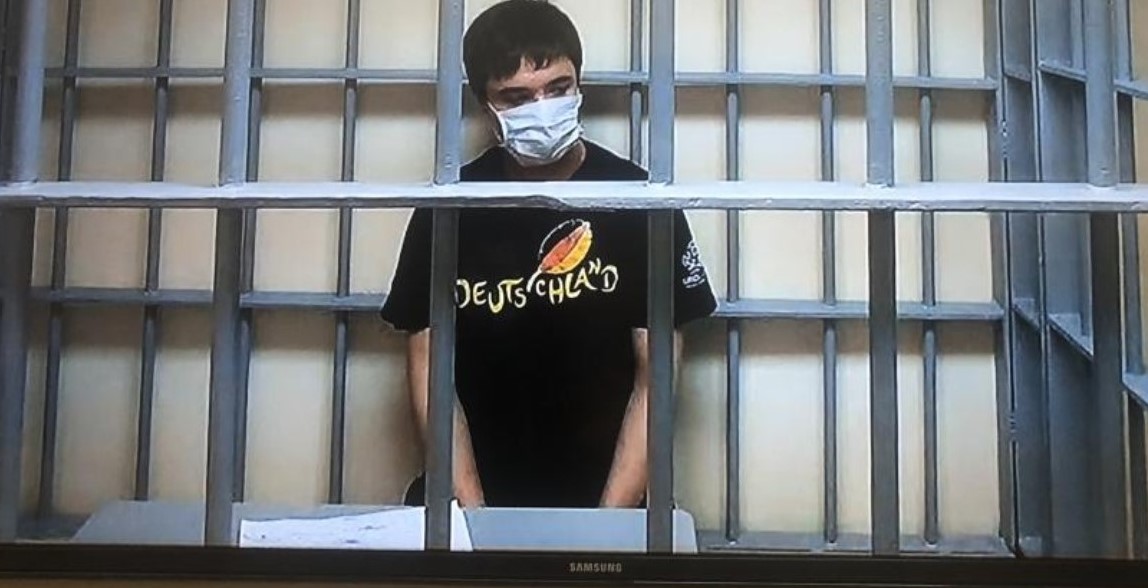 A military chamber of Russia’s Supreme Court has upheld the six-year prison sentence passed on Ukrainian political prisoner Pavlo Hryb.  It ignored the considerable evidence that Hryb, then just 19, was abducted from Belarus and tortured by the FSB, and the lack of any substance to the charges against him.  Most worryingly, it disregarded the evident danger to Hryb’s life, given the young man’s very serious medical issues.  It is only Russia that is treating this torment of a young student as a ‘trial’, and the hearing was, tellingly, attended by many western diplomats, the Ukrainian consul, as well as by some Russian activists who came to show their support for Hryb and other Ukrainian political prisoners.

The outcome was, unfortunately, expected, with ‘judges’ in such politically-motivated cases always handing down the verdict demanded of them. Pavlo was only allowed to address the court by video link from a cell in Rostov-on-Don.  UNIAN’s correspondent, Roman Tsymbalyuk notes that Hryb spoke in Ukrainian, with an interpreter supposed to translate everything into Russian.  The sound quality was very poor and much of Hryb’s last address to the court was not translated in full.  Hryb once again rejected the charges against him and said that he did not agree with the sentence.  He added, however, that like other political prisoners, he did not plan to give in. “Slaves are not allowed into Heaven. Glory to Ukraine!”

Hryb’s lawyer, Marina Dubrovina described in detail the torture used against the young man to force him to sign their ‘confession”. It was completely unlawful and unwarranted to base Hryb’s sentence on a ‘confession’ which he had retracted as soon as he was finally able to see an independent lawyer.

Dubrovina explained that he had been beaten and half-strangled during the abduction in Belarus, and then beaten in a forest soon after the FSB men had illegally taken him across the border.

The torture began as soon as Hryb’s FSB abductors had taken him across the border into Russia.  In the FSB building, he had been held without any water or food (which is positively dangerous in Hryb’s sake because of his health issues. They held him in a sports hall, tied to wall bars, and also threatened and tortured him, by suspending him with his head down on the wall bars, all to extract ‘a confession’ to a fictitious crime.

When Hryb’s case finally reaches the European Court of Human Rights, the Court will surely find that there were no grounds for taking into account a supposed confession extracted while Hryb was illegally held in total isolation, and which he retracted as soon as he was able to see a proper lawyer.

The Supreme Court was, nominally, considering an appeal against the verdict and sentence passed on 22 March 2019 by the Northern Caucasus Military Court in Rostov-on-Don.  The sentence was passed quickly, with the judges handing down the six-year sentence demanded by the prosecutor.

During almost every hearing of the ‘trial’, an ambulance had needed to be called for Hryb, yet the court refused to adjourn the hearings. There is no question that the judges were not aware that Hryb’s life was being placed in jeopardy.  At the beginning of February 2019, Dr Vasyl Prytula, Professor of the  Faculty of Paediatric Surgery at the Bohomolets National Medical University, who has been treating Hryb since the latter was a small child addressed the court.  He explained the danger that Hryb was in, the fact that the SIZO [prison] staff would be unable to give the specialist help he needs in an emergency.  He stressed also that Hryb had been due to have an important and highly specialized operation, two years ago around the time that Hryb was abducted.

The Belarusian authorities have tried to deny any involvement, however this is also impossible to take seriously since Hryb could not have been taken across the border into Russia without their knowledge.  The lad had a return ticket from Gomel to Ukraine, and the claim that he had ended Russia voluntarily was simply absurd.

Hryb was charged under Russian ‘terrorism legislation’ with inciting the young Russian girl, (Tatyana Yershova), who was then still at school,  to prepare an explosive device to detonate during a school assembly. This is alleged to have been at the instigation of another Ukrainian, Stefan Kapinos, with whom Hryb shared an account on VKontakte.

Hryb’s lawyer Marina Dubrovina has explained that the correspondence between the two teenagers was never provided in the original Ukrainian, but in a supposed translation into Russian.  When he was first presented with these alleged fragments of the correspondence, Hryb immediately stated that he could not say what was true, and what was falsified, but said that “we did not speak about that”.

Nor did the FSB themselves, despite having supposedly discovered such a plan, do anything.  Yet on July 4, they allegedly launched a criminal investigation, with this involving a search of the young Russian girl’s flat.   By July 28, the FSB had designated Hryb as the ‘accused’ in this story, and they then set about intimidating the young girl into persuading Hryb to meet her in Belarus, from where he was kidnapped and taken to Russia.  She told Ukrainian journalists then that the FSB had told her that if she didn’t cooperate, they would charge her with terrorism.  Unfortunately, she continued, during the ‘trial’, to provide the testimony which the FSB has used threads to extract.

Hryb has been in Russian custody for almost two years.  Although the conditions in a medium security prison colony may be better than in the notorious SIZOs in Rostov, all the concerns in Hryb’s case remain as immediate as ever.  The young man, who turned 21 on 1 July this year, needs specialist medical care, which he will certainly not receive in a Russian prison, although without this, the six years is likely to prove to be a death sentence.

It is not clear when Pavlo will be sent to a prison, so in the meanwhile please write to him in the Rostov SIZO!