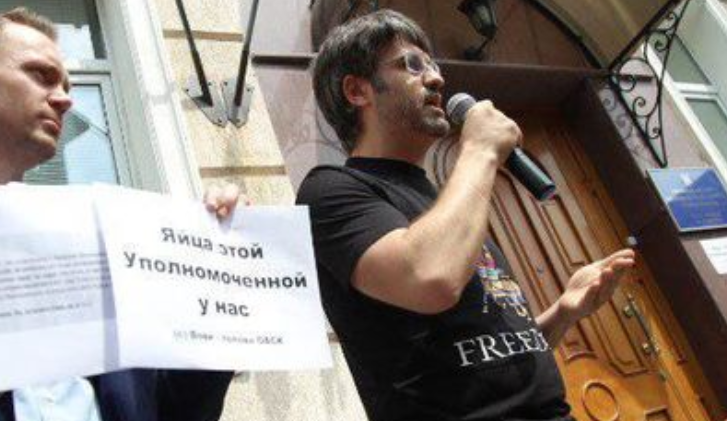 Ukraine’s Human Rights Ombudsperson Lyudmila Denisova has refused to comment on very serious allegations that she helped to fill a key judicial commission with members believed willing to issue the decisions required of them.  Silence may not be her best policy, however, since the  Prosecutor General’s Office has stopped trying to dismiss the evidence presented, and has summoned several judges from the District Administrative Court in Kyiv, to be informed of criminal proceedings.

As reported, it is the president of this court, Pavlo Vovk, and three other judges who are suspected of extensive wrong-doing.  The alleged machinations and dodgy court rulings passed to ensure removal of certain members of the High Qualification Commission of Judges [HQCJ] and appointment of others were first reported on 26 July by investigators from the National Anti-Corruption Bureau [NABU] and the Special Investigations Department, a body set up within the Prosecutor General’s Office, but which is often in conflict with the latter.  HQCJ has a critical role to play in ensuring (or blocking) judicial reform, particularly through the qualification assessments that it makes of judges. Any machinations to fill the posts therefore clearly has wide-reaching ramifications.  The makeup of the Commission was of direct interest to Vovk who received a negative assessment from the Public Integrity Council which can only be ignored with the support of a two-thirds majority of the members of HQCJ.

NABU used wiretapping methods as part of their investigation, and the main evidence provided at a press briefing on 26 July was in the form of highly incriminating taped conversations, allegedly between Vovk and other judges.  The conversations also form the basis of the allegations against the Ombudswoman, as well as the head of the State Judicial Administration.

In the Ombudswoman’s case, Denisova is alleged to have agreed to help Vovk ensure appointment of the people he wanted to HQCJ, using the two posts that the Ombudsperson is entitled to  In exchange, Vovk offered to facilitate her application against protocols on proceedings initiated by the National Agency for the Prevention of Corruption (over incorrect information on three years' income declarations).

It is alleged that Denisova organized the appointment of Mykola Sirosh to HQCJ to replace a person whose term had expired, and that this was after the candidacy had been agreed with Vovk. One of the tapes is seemingly of a conversation between Vovk and Sirosh, in which Vovk in extremely crude form makes his power over Denisova clear.  Sirosh was, in fact, voted for unanimously, and became a member of HQCJ, despite having received a negative assessment from the Public Integrity Council.

Although the evidence presented by NABU came from the taped conversations, concerns over Denisova’s abrupt dismissal in late June of Andriy Kozlov, the other member of HQCJ appointed according to the Ombudsperson’s quota, prompted calls of foul play back in June 2019.

Kozlov was well-known for his independent position and commitment to carrying out judicial reform in more than just words.  The news of his dismissal came after a Facebook post where he accused his fellow HQCJ members of dodgy methods aimed at protecting compromised judges.  The HQCJ meeting on 12 June and subsequent days was due to consider 51 judges, many of whom had been involved in persecuting Maidan activists, had infringed the rules for declaring income or had significant wealth whose origin they couldn’t explain.  Frustration has long been expressed at HQCJ’s willingness to turn a blind eye to all of this and to overturn negative assessments from the Public Integrity Council.  As noted, however, a two-thirds majority is required to override such assessments.

Kozlov was convinced that the meeting on 12 June was delayed by an hour and a half because the HQCJ members present were worried that there wouldn’t be enough of them present to knock down the Public Integrity Council’s report, since there were only 10 present, besides Kozlov, who was not expected to vote to ignore the Public Integrity Council.  After a vote to override one negative assessment did not produce the required two-thirds majority, the other members decided to “take a break”, with this decision requiring only a simple majority in favour.,  Kozlov was disgusted and walked out, writing about the event on Facebook.

It was under the previous Ombudsperson, Valeria Lutkovska, that Kozlov had been appointed to HQCJ.  This was as the result of a competition which was broadcast live, in October 2016, with his four-year term due to run until November 2020.  The transparent nature of that competition made the official reason given for his sudden dismissal on 27 June , - supposed doubts as to the length of his professional work experience – seem especially suspect.  A statement from many NGOs condemned the dismissal and said that it was aimed at removing independent members of HQCJ.

As mentioned, Denisova is refusing to comment on the allegations, directing people to her lawyer, without identifying the latter.

A competition for Kozlov’s post was announced on 27 June, with a month given for applications, and the commission to choose a successful candidate scheduled for 30 July.  There should certainly not have been any competition, since Kozlov has challenged his dismissal through the courts and this is ongoing.  This was pointed out at the meeting by one of the members of the commission and, in any case, with a couple of absences, there were not enough members present to  form a quorum.

A number of civic activists had come to the Ombudsperson’s Secretariat to protest against the meeting and to demand Denisova’s resignation.  They stuck pieces of paper on the door, either quoting Vovk’s crude words as to who was really in charge, or warning that a crime was being committed.  There are many other civic activists and groups who have stopped short of demanding Denisova’s resignation but who do believe that a proper investigation is required.

Although this scandal is on an entirely new scale, there has already been a great deal of controversy over the appointment of Denisova – a politician, selected almost certainly as part of political deals made between members of the then coalition in government (details here).

For the first four days after the press briefing, the only response from the Prosecutor General’s Office had been negative, with a flat denial that NABU and the Special Investigations Department had provided any evidence to back their allegations.  On 30 July, however, the Prosecutor General’s Office issued information indicating that Vovk and other judges are to be informed that they are under suspicion of criminal offences.